The Curse of the Gadwal

The waterfowl hunting season is perhaps the most anticipated time of year for me. Over the past 7 years I've developed quite the obsession with hunting ducks and geese. One season I hunted a total of 44 days; not sure how I passed my classes that semester, but I did. The excitement I feel when I see a group of ducks or geese locking their wings and dropping into the decoys can only be compared to watching a very large trout slowly come up and eat your dry fly.
I had eagerly awaited my first duck hunt of the season. I have always done well at a certain spot early in the season. In fact, the last 3 years, those hunts there have ended in limits. I picked my day and invited my future father in law, Rick. Convincing him to wake up super early wasn't terribly easy, but he agreed to do it. 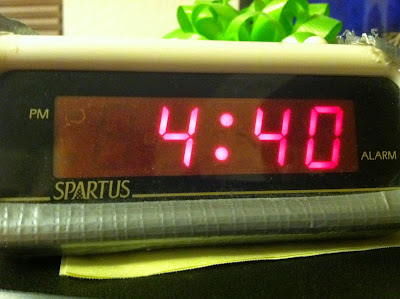 4:40 AM came quickly, but I was ready. I sprung out of bed in anticipation of whistling wings and shotgun blasts. I met up with Rick, he threw his stuff into my rig and we were off!
The place we were headed was a pond on public land along the Snake River. This location receives a fair amount of hunting pressure on the weekends, but during the week, it's usually pretty easy to secure the pond. We pulled into the parking lot and a sickening feeling hit me like a ton of bricks. Someone had beaten us to the spot. I looked out in the distance and could see a headlamp moving about. Crap! There were other spots to set up nearby, but they weren't as good as the pond this early in the season.
We readied our gear, put on our waders and headed out into the darkness. We neared the river and decided to set up on a side channel. I started setting up the decoys and Rick began working on making a blind. With the decoys set up and a blind built, we were able to sit back and enjoy the sunrise. One of my favorite parts of duck hunting is watching the world wake up.
﻿ 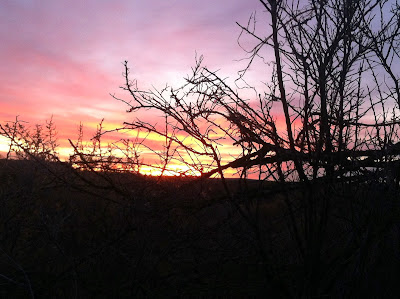 As we sat and watched the sky turn from black to blue and then orange, the whistling of wings could be heard overhead. Excitement began to brew inside me. We looked out in front of the blind to see a group of ducks lock their wings as they made their descent into the decoys. I looked at Rick and he gave me an approving smile back. A group of 6 puddle ducks landed only a few yards away from us. We still had 15 minutes until we could legally shoot, but its always a good sign to see birds landing in the decoys. The ducks milled about for a little while before they realized their friends were plastic and they flew off. 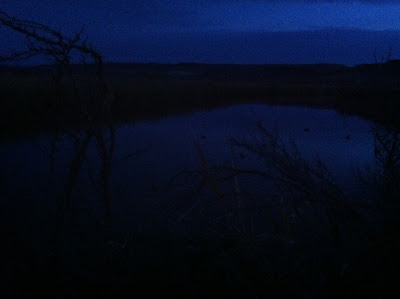 A few more minutes passed and it was nearly time. A single mallard flew over our heads, immediately locking its wings as I gave it a 5 note hen greeting with my duck call. The mallard hooked around and was headed straight for us, fully committed. The single duck began back-peddling its wings and lowered its orange feet as it plopped into the water in front of us. I looked at my watch and we still had 3 minutes until shooting light. The single mallard drake took off into the sunrise. 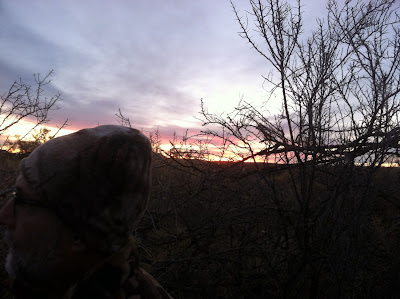 Legal shooting light came around and we anxiously waited for a group of ducks to come near. Several minutes passed before we saw our first prospects. A group of a dozen or so ducks came our way. I watched as they approached our spread with critiquing eyes. They veered toward the pond and I hit them with the duck call. Their response wasn't what I was hoping for. The ducks locked their wings and began descending onto the pond. I called again, but it was clear they wanted to be on the pond. We watched until they disappeared from view. We waited for the sound we dreaded hearing. BANG.... BANG............BANG!
We watched as most of the ducks rose from the pond and flew back to the river.
"That could have been us." I said begrudgingly.

A few minutes later, a single duck appeared out of nowhere. It was headed straight for us and was flying quite low. The duck locked its wings and I told Rick to get ready. I identified the duck as a gadwall as it made its final approach. The gadwall began back-peddling and I told Rick to "take him!". Rick rose and made a clean shot, killing the duck. Splash! It landed in the water outside the decoys. The bird dog (me) went and retrieved it. I brought the duck back to the blind and handed it to Rick. 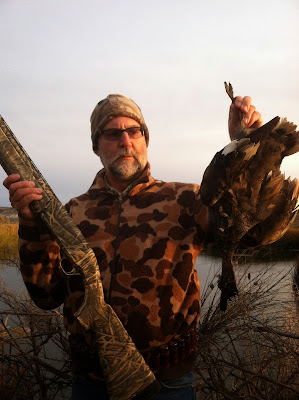 "Didn't we only get one gadwall the last time we went duck hunting?" Rick asked me.
"Yeah, you shot the only duck that day, and it was a gadwall." I said in reply.
"I hope this isn't a sign." Rick chuckled with a deeper concern in his eyes.
I'll explain what happened the last time I convinced Rick to go duck hunting with me. A friend and I had hunted a spot near Weiser and shot 2 limits of Greenheads (drake mallards). Two days later I invited Rick to hunt with me at the same spot. We drove all the way out there, only to find someone in our spot. We set up nearby in what looked like a decent location. Not long after shooting light, a single gadwall came in and Rick shot it. That was the last duck to come anywhere near our decoys the rest of the day. So you can understand our concern with the current situation.
As the morning progressed, it looked as though "The Curse of the Gadwall" may actually exist. The skies were empty of ducks. Every once in a while, some ducks would come near, but their interest was on the pond. We decided to grab a few of the decoys and set up on the river. It couldn't hurt our current situation.
﻿ 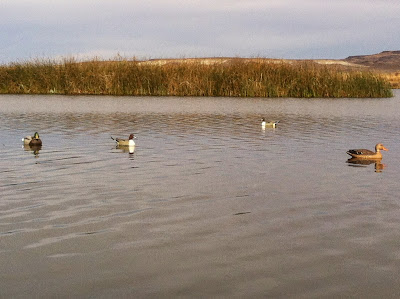 You can always tell when a duck hunt isn't going very well by a hunter's body language. For instance, first thing in the morning when anticipation and optimism is high, a duck hunter's head is on a swivel. He is crouched and hidden like a cat waiting to pounce. By late morning of a dismal duck hunt, you will likely find the duck hunter zoning out and becoming complacent. He often forgoes the need of complete concealment. Rick and I were to that point now; sitting on the bank of the river, practically in the open and staring at our decoys.
"Shouldn't have shot that gadwall, Rick."
"I guess we'll know better next time."
We both shook our heads and laughed.
We packed up the decoys and headed back to the rig. We estimated the hunter on the pond had shot 4 or 5 ducks that day. I've hunted this area many times and I've learned a lot over the years on how to hunt it. If the pond is not frozen, the ducks ALWAYS want to be on it. They will choose the pond over any other location. It's easy to blame someone or something (like a silly superstition) on an unsuccessful hunt. The truth of the matter was simple: Someone had beaten us to the pond and our outcome was a result of that. Next time he'll be the one disappointed!
﻿


Posted by Ryan's Fly Fishing and Hunting Blog at 9:28 PM