Salmon flies and Goldens on the South Fork

"The South Fork is closed." A mysterious voice said from behind me while in line at the Mountain Home Subway. I turned to see the familiar face of a regular Anglers customer.
"Hey Dave!" I replied with a smile and friendly handshake.
"Hey, I'm Dave." Dave extended his hand towards Terry Kowalis, my fishing partner for the day.
"I'm Terry, nice to meet you. You fishing by yourself today?"
"Yeah I'm wading. I've got some spots I know I can hit."
"We got an extra spot in the boat if you want to join us?"
"Yeah I might do that!"
We grabbed our sandwiches and Dave followed us the rest of the way down to the South Fork of the Boise River.

The fire and slides from several years back had made launching a drift boat more challenging. But as they say, 'you can't keep a good angler down', and in this case, many anglers. Boat owners had taken matters into their own hands and began to create their own boat launch below the previous boat launch, now un-usable as a result of a new rapid. We rigged the boat, looked both ways on the road and backed the trailer down the dirt bank. 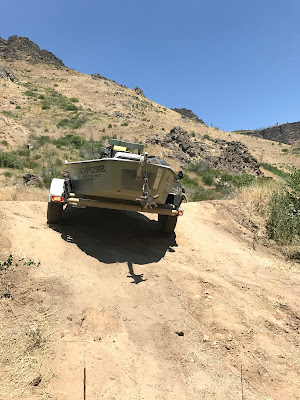 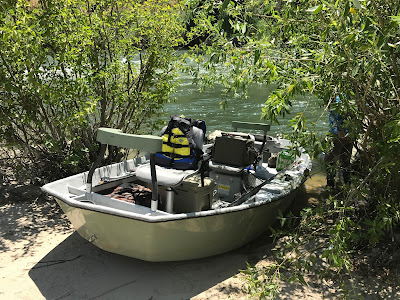 We set off down the river, armed with big dries imitating salmon flies and golden stones. I was on the oars first, the perfect place to assess the river conditions and in prime location to heckle the anglers.

Terry tossed his chubby salmon fly to the bank and let it drift lazily towards an overhanging bush. A golden shape with a red stripe rose with purpose and devoured his fly!
"There's one!" Terry said, setting the hook with force.
"Nice!" Dave said, starting to reel in his line.
"Keep fishing! We got this. Let's get a double!" I urged and pointed back to the prime shoreline we were passing. 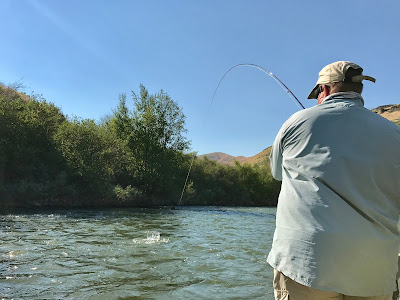 Dave picked up his fly and plopped it back towards the shore. I was staring at Terry and planning where to land his fish when I heard Dave yell, "OOOH, theres one!"
"Doubled up!" I shouted loudly, hoping there were other anglers in the vicinity.

Luckily Terry had 2 nets in the boat. I handing each angler a net and found a calm spot to anchor the boat. We had to get a picture of this double. 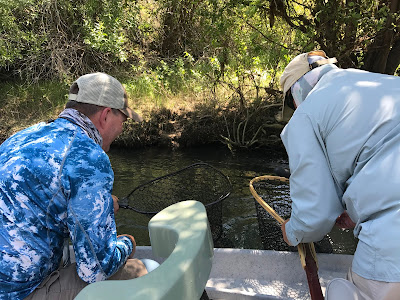 Terry and Dave each netted their fish. 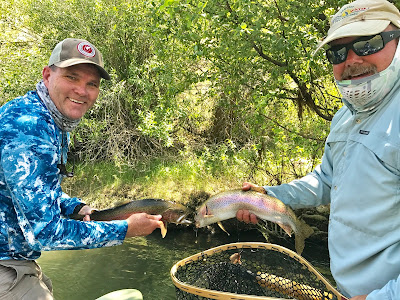 It was now my turn in the front of the boat. I began casting the big salmon fly at every likely home of a bank patrolling carnivorous trout. I placed my fly near the grassy bank and let the current float my fly into the shadows of a tree. A nose rose and consumed my fly.
"There's one!" I said as I heaved back on the rod. 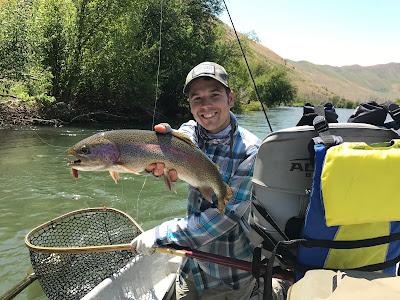 The large trout battled with all it's might before we scooped it into the net for a picture.

We hadn't made it far down the river, but fishing had been great so far. Terry was up next. Terry is a master at achieving a long drift and flirting with danger. He'd place his fly in front of a bush and let it go right into the shadows and sticks, waiting until the very last minute to pull it out. Every time I'd cringe as the seconds would go by long after I would have pulled my fly out and re-casted. I couldn't believe how lucky Terry was at not snagging the sticks and he was often rewarded with a fish. 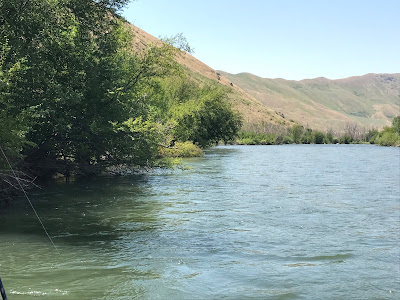 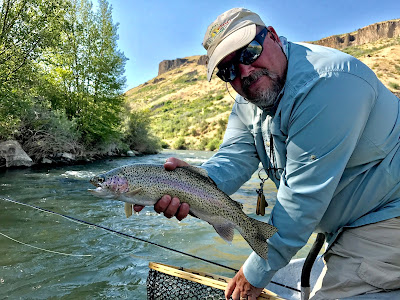 We continued down the river catching plenty of fish. This was shaping into a stellar day. 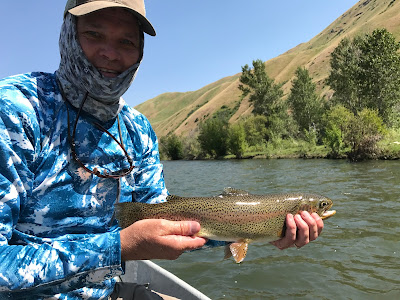 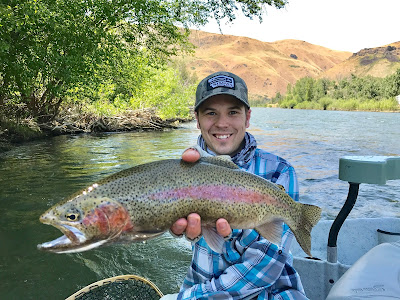 After we caught a few more fish, we stopped for lunch in a side channel.
"Look, a pink!" I said, pointing at the small flesh colored mayfly hatching on the blade of Terry's oar. 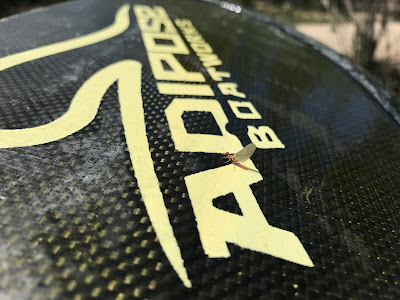 "And a golden stone!" I said with exaggerated enthusiasm. I grabbed the crawling trout delicacy and showed it to Dave and Terry. 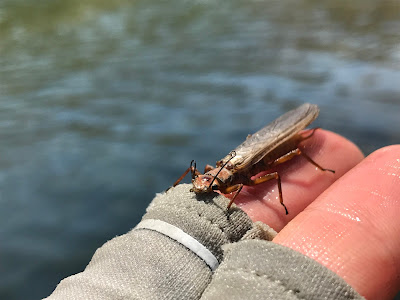 Dave walked up the channel and began putting on a clinic. He walked each fish down to the boat to net and to get a picture. 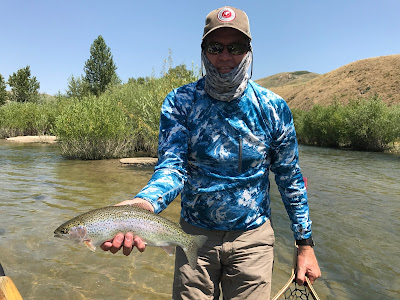 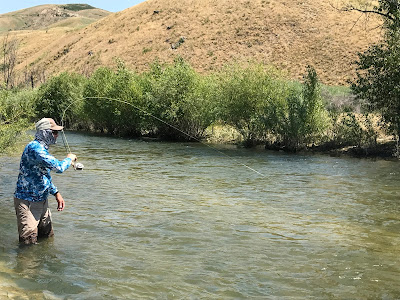 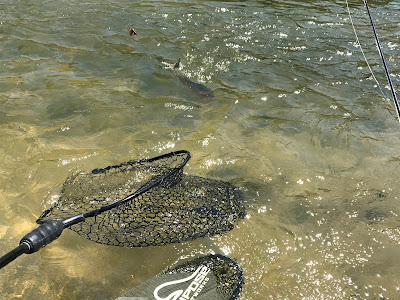 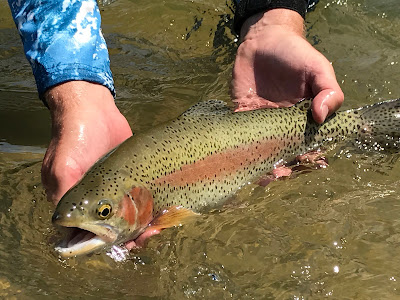 We continued down the river picking up fish on both salmon flies and goldens. Our salmon fly chubby was beginning to get quite beat up. 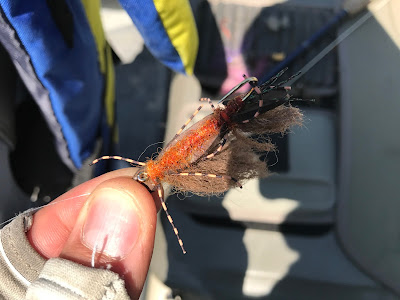 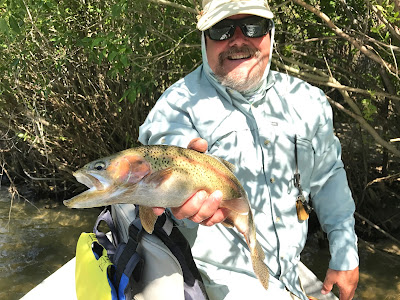 However, the fly was still in it's prime. I've found the uglier the better with chubbys.

As we neared the take out, we approached a great riffle. A common mistake I see anglers make while floating is not looking downstream. It's easy to miss prime water by focusing on what's directly even with the boat when you should really be looking ahead. I took my eyes off the bank and focused my attention on the riffle we were fast approaching. I knew the boat would run directly over prime trout water so I placed my cast below the boat in line to intercept the mid-thigh deep seem the fish would likely be laying in. With 40 feet between my fly and the boat the fish would surely see my fly before they saw the boat.
My fly rolled down into the faster, choppy water and a big, golden rainbow charged up to eat the fly. I set the hook and began fighting the fish. We netted it just before the take-out. 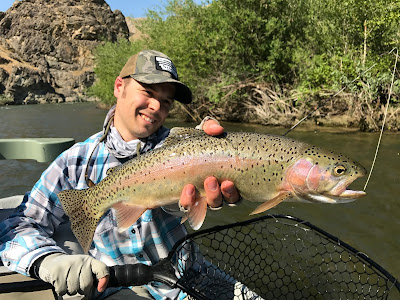 "Wow, that was a great day!" Dave said as he pulled our boat to shore. "Glad I decided to float with you guys."
"You're welcome anytime in our boat." Terry said, shaking Dave's hand.
We made the shuttle back to the truck and trailer, pulled the boat out and said our good byes to Dave. It had been a great day of throwing big dries to big trout, a day we hope to repeat next summer!


Posted by Ryan's Fly Fishing and Hunting Blog at 9:53 AM