For several years, I'd told myself I was going to catch an Idaho chinook salmon on my fly rod. Every year I'd say, "This is the year I'm going to do it!" And every year something would come up and prevent me from planning a trip. This year was different.

I'd heard that my best option to catch one on my fly rod was the South Fork of the Salmon River. But I was also told I better watch the regulations because the season is very short, only a few days some years. This year I closely watched the regulations and planned my trip. My brother in law, Trevor, had fished it before and he agreed to take me. By 5 AM, we had all of our gear loaded into my pickup and we were off to the river. 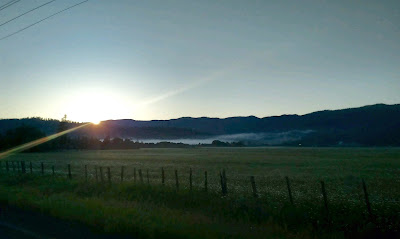 The sunrise in Long Valley was picturesque. The misty clouds clinging to the early morning grasses and trees gave me a smile and also a good feeling about the day.

One of the things that keeps many fly fisherman, myself included, away from targeting salmon in Idaho, are the crowds. For this reason, we did a little research and discovered that there was an area on the river where you could hike into a canyon stretch away from the road. This would hopefully weed out the crowds and give us some "untouched" water.

We pulled into the parking lot, geared up, and were on the trail in no time. We packed light, just in case we had a couple of salmon to carry on our hike out. The trail was well maintained, but showed no signs of dropping elevation. 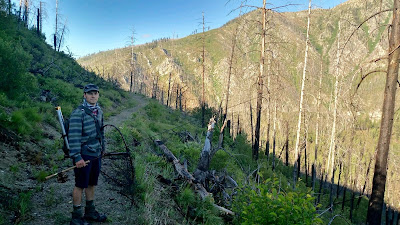 The river was nearly a thousand feet below us and after a while we spotted a small trail descending from the main trail. We decided to take it, but it wasn't long before our "trail" disappeared and we were crawling over fallen trees and rocks down the steep ridge.
"I'm sure when we get down there we'll find a nice trail along the river," I said with confidence.
"Yeah, I think I can see one," Trevor responded.
"I just hope we can find the main trail that will take us back up out of there." I said with a little uncertainty.

The area had burned several years back, leaving the mountain sides relatively open and easy to spot deer and other wildlife. 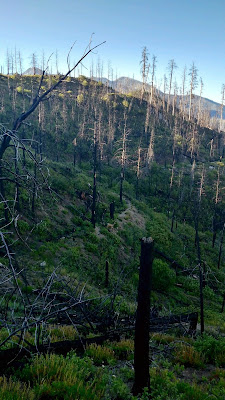 We made it down to the river and I began to set down my things. As I set the net down, I noticed a strange piece of driftwood.
"Trevor! It's an elk antler! My first elk shed!"
"Oh man, I just thought that was a stick."
"Ha ha, it's the ugliest elk antler I've ever seen, but it's an antler none the less!" I said, with a comical sense of pride. 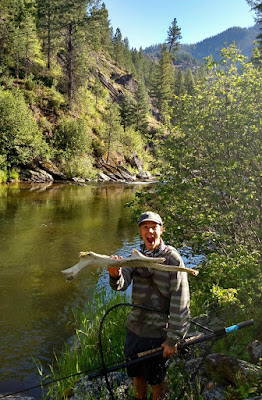 Almost any time Trevor and I go somewhere, he finds an elk antler. He has piles and piles of them at home, making my rotten, beat up, decade old find that much more funny. 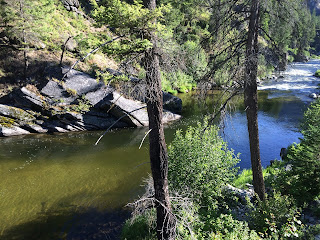 The river looked gorgeous! It was low, clear and filled with deep pools that seemed to promise salmon. We strung up our rods and began fishing.

We fished the first hole with only a gullible whitefish to the hand. We decided to head downstream and see if we could spot some salmon elsewhere. The water was a pleasant temperature, making my decision to wet wade a wise one. 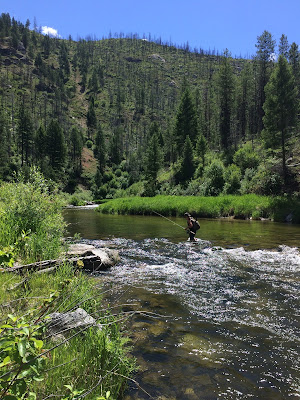 After crossing the river, we came across a nice looking run that dropped into a deep pool, bordered by a rock cliff. A couple of large trees had fallen into the water, creating great cover for any fish. It wasn't long before we started spotting salmon throughout the run. Their size made them easy to spot. However, as soon as we began casting, they spooked and were darting throughout the run, looking for anywhere to hide.
"Dang, these fish are spooky!" Trevor said, as he casted to a fish moving from behind one rock to another.
"Yeah I've heard they don't bite well in the middle of the day. I feel like I'm trying to catch a trout on silver creek with a wet sock." I said, as I reeled in and climbed out of the water. 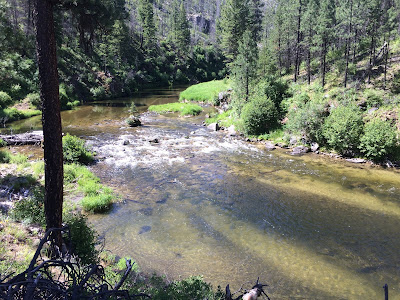 I crossed the river and got up above the run to see if I could spot where all the fish had gone to hide. I only spotted a couple of fish as I watched Trevor cast to them. We stayed at this spot for about an hour before we decided to hike out of the canyon. 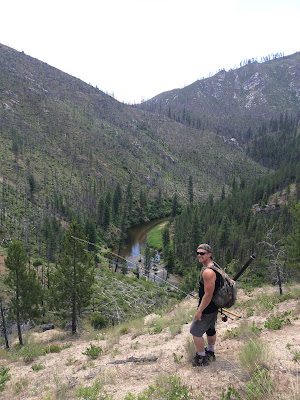 The mile of river we covered had not revealed any kind of maintained trail out of the canyon. So we pick a south facing ridge and traversed the hillside back to the road. It had taken us 15 minutes to get to the river from the truck in the morning. Our hike out of the canyon took us a little over an hour. Hot and exhausted, we finally reached my truck.
"Well that wasn't worth it." Trevor said as he sat down on the tailgate.
"Nope. All I can say is you're not a very good salmon guide." I said with a chuckle.
"You're right. I failed. Let's run downstream to a spot I've fished before." Trevor said, mustering up a little optimism.

We drove down the road and Trevor pointed out the spot. We parked and walked down to the river to look for salmon. Immediately our eyes lit up as a large, copper colored fish porpoised 30 feet in front of us. We stood there and watched as another porpoised a minute later.
"Let's fish here." I said, with wide eyes and optimism.
We decided to cross the river and fish from the other side to get a better drift. 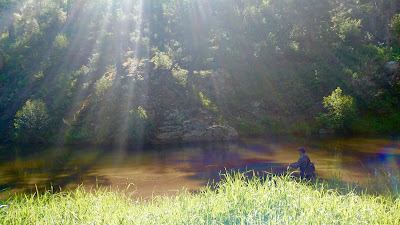 The fish continued to porpoise regularly, until we began casting. The fish here were spooky as well and I began to wonder if we should wait until the run was shaded to continue fishing. It was nearly 4 pm and the sun was still high. I didn't want to push all of the fish out of the run. Trevor had mentioned that in the past they would start catching fish again towards the evening. We fished on and off for a while with no success.

I decided to walk upstream to the top of the run. I had noticed earlier that there was a deep slot that could potentially hold a salmon or two. As soon as I made it up there, a salmon porpoised directly in front of me, next to a large rock that barely broke the surface. I made a quick adjustment to my strike indicator and rolled a cast out there. I intently watched the indicator as it drifted down past the rock. I re-casted my setup and watched as the indicator gently drifted past the rock. Suddenly, my yellow indicator took a plunge and I set the hook. I immediately felt the weight of a significant fish. I still wasn't sure if the fish on the end of my line was a salmon and I didn't want to jinx myself, therefore I kept silent. The copper colored fish came near the surface and gave a big kick with it's tail and began to run upstream. At least I knew now that I had a salmon on my line. The fish continued to run upstream taking all of my fly line and a little backing before it stopped. 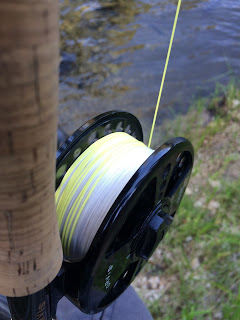 The fish then ran back downstream and was headed for Trevor. I kept looking down at Trevor to see if he would notice I had a fish on. A couple times he would look up at me then back to casting.
Finally, I spoke up. "Hey net boy!"
Trevor looked up and I could see his eyes get wide. He grabbed the net and ran up to help me.

The salmon continued to pull and put up a great fight. After close to 10 minutes, Trevor slipped the net under the large fish and I had my first Idaho chinook. 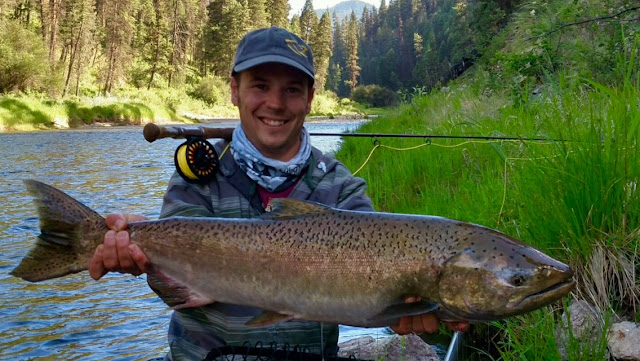 Despite the long journey chinook in Idaho have, their meat is still very orange and firm. This hatchery fish was definitely going home with me.

I handed the rod to Trevor and had him cast while I notched my tag and bled the fish. Trevor fished the spot for a while before deciding to head back downstream to the deeper part of the hole. I jumped right back in and started casting to the same spot. While my indicator was in mid-drift, a salmon porpoised two feet downstream of it. There was definitely another fish in here. I continued to cast for some time before my strike indicator told me I had another fish. 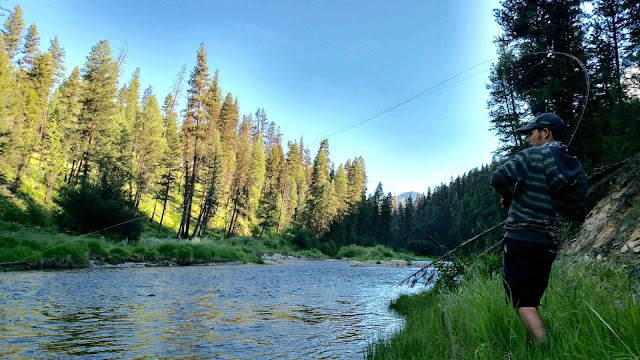 I was quite surprised to have another salmon on my line. I was more than thrilled to have caught one, but two made me estatic.
"Trevor!" I yelled and waved my arm to get his attention.
Trevor came running back upstream to help me net my fish. This one fought even harder and longer than the last. After nearly 15 minutes, we netted the 35 inch fish. 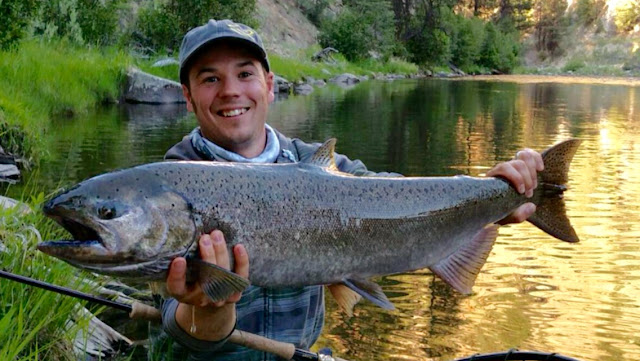 This fat female was a hatchery fish as well. It was 7 pm and I decided to end my fishing for the day by tagging her.

I made sure Trevor was casting to the right spot. Our confidence was again boosted when another chinook porpoised in the slot near the rock.
"There he is Trevor! Get him!"
"He's mine!" Trevor said as he made a great cast setting himself up to drift right over the fish. I walked back downstream to fish the deeper hole. No sooner had I made my first cast, I heard Trevor yell my name. I looked up to see Trevor's rod bent and a big smile on his face. 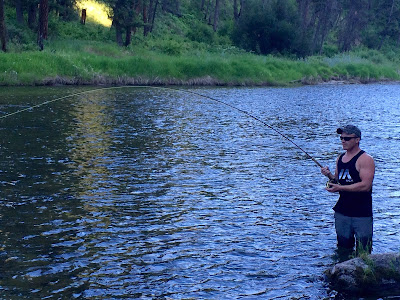 Trevor played the strong fish for a while before I scooped it up in the net. Trevor had guided in Alaska with me for a summer and hadn't had a chance to get a chinook on his fly rod there, making this Idaho fish that much sweeter. 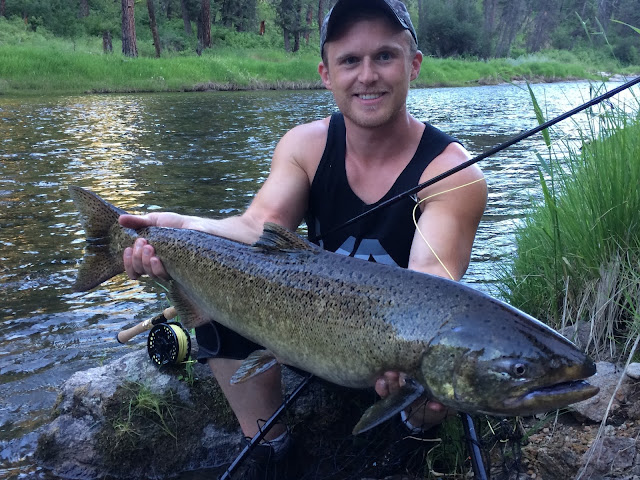 Trevor's fish was also a hatchery fish, so he tagged it. Trevor continued to fish the sweet spot until 8 pm. With a long drive ahead of us, we decided to call it a day. We packed up our gear, crossed the river and loaded our things in my truck.

We both had accomplished what we had set out to do; catch an Idaho chinook on the fly rod. Our journey into the canyon made me feel like we had earned these fish. I knew I wouldn't be able to go again this season but you can sure bet I'll be looking forward to planning a trip next year.

Before we left the river, Trevor and I both celebrated our fish with a piece of my wife's homemade raspberry rhubarb pie. A sweet ending to a great day.