When I was just a young boy, my fishing buddy Camron and I were drug to a garage sale by his mother. Camron's mom could not drive by a garage sale sign without stopping.
"Come on mom. Sheesh! Another one? It's just a bunch of junk!" Camron yelled from the back seat.
"I'll be quick! Maybe I'll find you boys a fishing pole or something cool." She replied, as she pulled the van over.
"Look, a pond!" Camron said, pointing to a small pond about a half acre in size. "Mom, can we go look at that pond?"
"Sure boys. Be careful. I'll be done soon." She said, as she walked over to a nice house with a display of "junk" in the yard.

Camron and I walked over to the small pond and stopped dead in our tracks.
"Look! Fish!" I pointed and yelled.
"Look at that bass! And that's a big bluegill!" Camron shouted and pointed his finger.
Like kids in a candy store we walked around the pond, marveling at the number and size of the bass and bluegill. We also discovered that this pond was just one of several in the neighborhood. Turns out, Camron knew a kid in the neighborhood and his parents gave us permission to fish. That was the beginning of many years of neighborhood pond fishing. 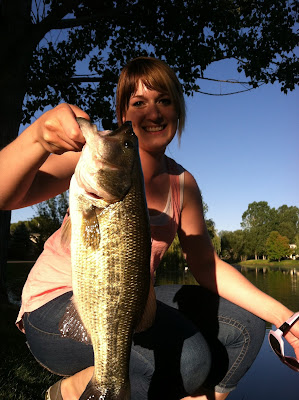 I don't remember if Camron's mom found anything at that garage sale, but I was sure glad she pulled into that neighborhood and we discovered all those ponds. We had stumbled upon a kid's fishing dream.

Neighborhood or subdivision ponds can be found all over the Treasure Valley. Almost all are planted with bass and bluegill and receive little to no fishing pressure. Bass and bluegill in these ponds live happy, prosperous lives, growing to great size and numbers. Most of these ponds are catch and release only and are reserved for the residents of the neighborhood. Secure permission from a resident and you will likely experience some of the best bass and bluegill fishing you've ever had, only 10 minutes from home.

When I found out our local UPS driver, Greg, lived in one of these subdivisions, I was quick to ask permission to fish.
"Yeah, of course you can come fish... But as long as you take my 2 daughters!" Greg replied.
"Deal!" I said, with a big smile on my face.
On the day we had planned, I was knocking on Greg's door at 6:00 pm sharp.
"You girls ready?" Greg yelled from the front door to the kitchen.
Greg has two daughters; Lola is 9 and Stella is 6. Neither one had ever caught a fish. The girls threw their shoes on and we headed out the door. We grabbed a couple spinning rods and a fly rod out of the back of my pickup and walked over to the pond.

A pod of large bluegill were waiting for us as we approached the water.
"Girls, do you see those dark shapes out there? Those are bluegill, let's just see if they like this fly I have." I said, as I made a short cast out to the pod of hungry fish.
A fat 9 inch bluegill responded the way it should and in seconds I had a fish thrashing and fighting. I palmed the fish and lifted it up to show the girls what they would be catching.
"See the cool colors and these pokey fins?" I asked, as Lola and Stella reached out to touch the skin of the fish before I released it. I made another cast, and this time when a fish grabbed the fly, I quickly passed the rod over to Lola so she could bring it in. 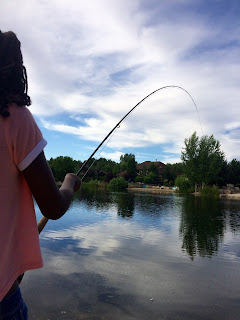 The large bluegill was pulling hard but Lola was not going to let this fish get the best of her. Moments later, I grabbed the large male bluegill and we admired his bright orange chin and dark gill patch.

After releasing that fish, I handed Greg a spinning rod and wacky rigged a 5 inch plastic worm onto the hook. If you are an open minded, decent human being, and aren't a fly fishing snob, the most effective tactic I've found for small pond bass fishing is wacky worming. It is downright deadly and a tactic you should learn and use if you want to catch lots of bass. Greg no more than dropped it in the water and a large bass appeared out of nowhere and inhaled the worm, swimming off with it. Greg immediately set the hook and the worm came flying back toward him.
"Next time you have one grab it, count to 5 before you set the hook." I said, casting the fly back out to where the bluegill were.
I handed the rod to Lola and I showed her how to strip the fly in and twitch it. 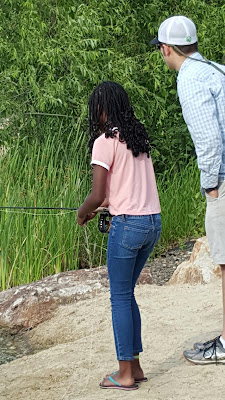 A fish jumped onto the fly and I helped Lola set the hook. This fish was pulling a little differently and moments later it jumped, revealing that our fish was a bass.
"Lola, you have a bass! And it's a good one! Keep that rod up." I said, as I got ready to lip the bass.
Lola swung the bass to my hand and I apprehended it.
"Lola, you want to hold this one?"
"Suuurrre.." She replied, a little unsure of what she might be getting herself into.
"Now when you grab this lip, you have to commit. Just grab it hard."
After a couple loose grabs, she finally got a good hold on the bottom lip and hoisted up the fish. 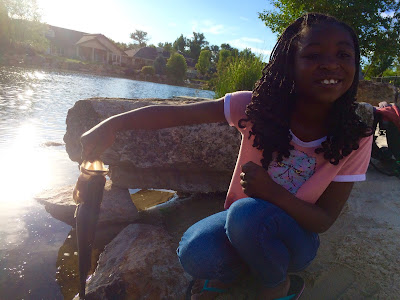 I continued to fish with Lola, and Greg sat Stella on his lap and they began casting the plastic worm. 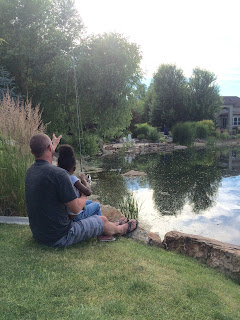 Several casts later, Stella was giggling with delight as she reeled in her first bass. Greg did a wonderful job helping her keep the rod up and the line tight. I crouched near the water and lipped the bass when it came close. 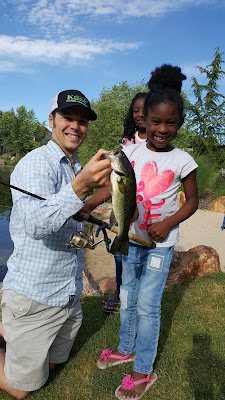 Lola and I went back to fly fishing as Greg and Stella continued to throw the worm. A few strips of the fly and Lola was into another fish, this one another big bluegill. 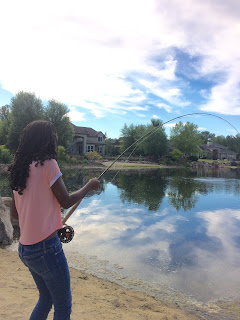 We released the bluegill and heard Greg and Stella yelling for us to come over.
"Ryan! This one is pretty big!" Greg said, as Stella reeled with all her might while sitting on Greg's lap.
The bass was pulling hard as it made it's best attempt to stay in the weeds, but Greg and Stella eventually overcame the strong bass and I was able to apprehend it. 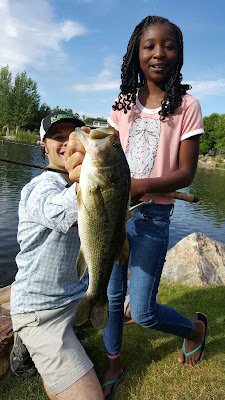 After releasing the 17 inch bass, we began to walk around to some other areas on the pond. I continued to fly fish with Lola as Greg and Stella stuck with the spinning rod. Greg and Stella parked themselves on a rock nearby and began to auto-load on the bass. Every time Lola and I looked over, they were hooked up on another bass. Eventually, the competitiveness in Lola couldn't take it anymore, and she wanted to use a spinning rod to catch up with her little sister. I handed Lola the spinning rod with a plastic worm and we were back in the game! 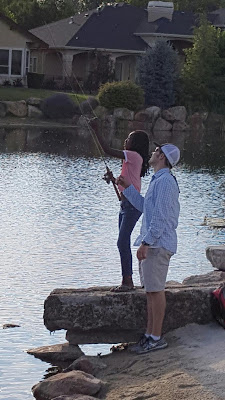 With a little instruction, Lola was casting by herself and fishing the worm like a champ. Then several casts later, she was into a nice largemouth bass. Over the next half hour, both Lola and Stella brought in numerous bass until both girls were tired and hungry. We had fished for close to 2 hours and each girl had not only caught their first fish, but each had landed about 10 apiece. It was a very successful fishing trip.
"So did you know fishing would be that good?" Greg asked, as we walked back to the house.
"I was hoping it would be that good. But I'm not surprised it was that good." I said with a smile.

If you like catching 10-20 inch bass, and large pan-fish just minutes from home, subdivision or neighborhood ponds are for you. I can almost guarantee you know someone who lives in one of these neighborhoods. Most people, including the people who live there, don't even realize they are fantastic fisheries. Start asking your friends and I bet you have an "in" to some of the best bass fishing around. It's amazing how underutilized these fisheries are. If you can handle fresh cut grass and scenery consisting of fancy houses with lawn furniture, these little gems will keep you entertained all spring and summer.