Katie and I had been hitting the fishing pretty hard in the spring of 2018. Crane Falls, Owyhee and Brownlee; all overnight trips and all great fishing. My mind was already thinking about the next place I wanted to fish: Cascade Reservoir. World famous for it's trophy perch, Cascade is one of the few places in the world where you have a shot at catching a 16 inch fish. Until you see one that size, you won't understand.
"I was thinking we should try Cascade this weekend," Katie suggested one evening.
My head quickly cocked to the side. Did I just hear what I wanted her to say? "I think that's a brilliant idea!" I responded enthusiastically. "You are one amazing woman!"
"Let's try to catch some of those perch!" The angel next to me said.
"I've been wanting to try that.."

I conducted a little research, talking to guys who have fished the reservoir. Cascade is a large formidable body of water, but with some advice, I had narrowed down our fishing options to a couple locations. After getting off shift at the fire department, I rushed home and packed up the truck, leaving Boise by 10AM. Katie's brother Trevor was also going to meet us up there.

Upon arrival at the lake, we found a nice campsite in a developed camp ground; something Katie and I are not used to. We set up camp and quickly made friends with our neighbors across the way: a fellow fire fighter! He and his wife would be there for a whole week and they had brought their boat. We discovered they were fairly experienced at fishing Cascade. They gave us tips to find the fish and even invited us out on the boat in the morning, an offer we couldn't refuse.

We got our gear and boats ready, pushing off the bank just in time for the evening bite.
"I don't think this tape is big enough for the fish I'm going to catch!" Katie said, referring to the stripping apron on her float tube.
"Oh really? You are so spoiled!" I laughed, and then thought about all the large fish my wife had caught this year. She truly was spoiled. "We'll see about that!" 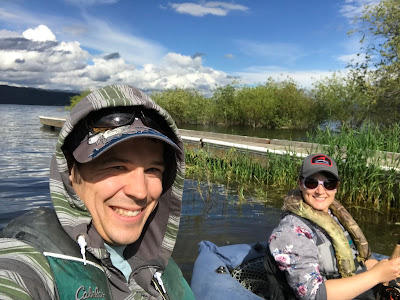 Perch tend to hang in deeper water than most fish we're used to targeting on the fly rod, so we set our balanced minnows at about 15 feet and began to slowly troll and jig them at the same time. Katie and I kicked along, probing the depths for perch, or whatever wanted to bite. Tall aquatic weeds had begun to grow, snagging our flies when we wandered too shallow. 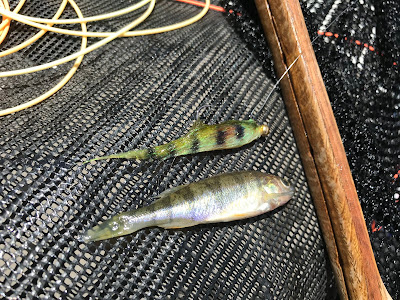 I began to kick into slightly deeper water and away from the weeds when my indicator sunk and I felt some resistance. I set the hook and felt a fish squirming on the other end. The fish didn't put up much of a fight, telling me it probably wasn't a trout or a smallmouth. Could it be a perch? A large, yellow shape with dark stripes materialized beneath my boat.
"Honey, I got a perch! And it's huge!" I shouted to Katie, who was about 50 yards away.
Katie kicked over to take a picture.
"Look honey, it's like a perch. Only bigger!" We both chuckled as I held up the large specimen. 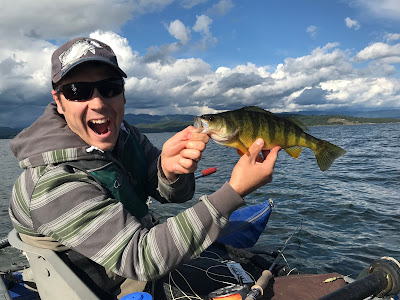 My next fish was a rainbow trout. Only 14 inches and diseased looking, it made it back into the water without a picture.

By 7 pm we had still only caught the 2 fish. This perch fishing may be a bit more challenging than we hoped for. We were almost back to where we launched the boats when Katie tied into a fish.
"It's a perch!" Katie said, netting the fish.
"Looks like another big one!" I said, getting ready to take a picture.
Katie held it up for a photo; another dandy specimen, about 14 inches. 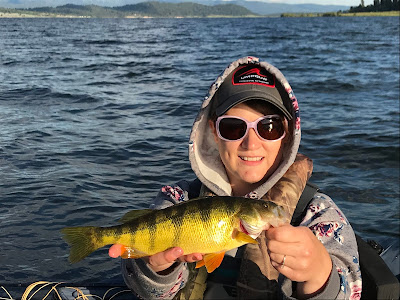 Trevor showed up and we went back out to fish until dark. Again, the fishing was not superb. We tried deeper water and shallower water but we just couldn't seem to find anything consistent. About a half hour before dark I tied into another 2 perch right by our launch spot. Trevor also caught one that was a monster at 17 inches, finishing up a fun but tough afternoon of fishing. 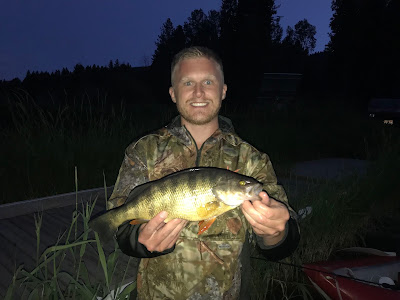 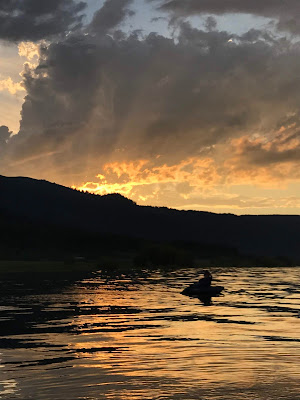 The next morning we went out in the boat with our fire fighter friend. He took us to a couple spots where I landed a few more large perch. 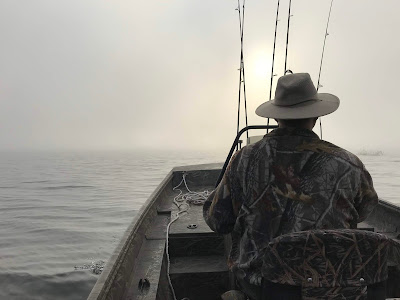 Once again the fishing was slow and no one else caught a fish. By 10 am we were back to camp and ready to hit it hard in the float tubes.
"It's as hot as the dickens out here!" Trevor exclaimed, as we pushed off the shore to fish for the afternoon.
We laughed at Trevor's comment, the start of an afternoon overusing the expression.
"These perch are as big as the dickens in here!"
"This fishing is as slow as the dickens!"
"I'm as hungry as the dickens!"
"This water is as cold as the dickens!"
If fishing was going to be slow we might as well have fun while doing it.

By dinnertime we had landed a couple more perch and some decent smallmouth. One bass was 19.5 inches. 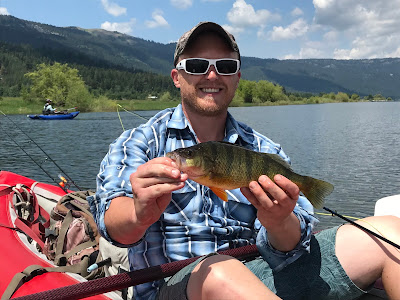 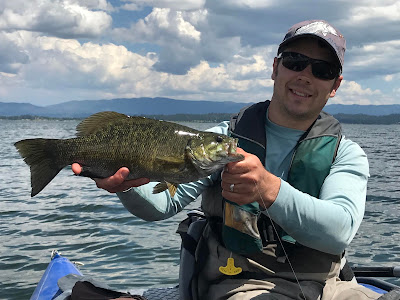 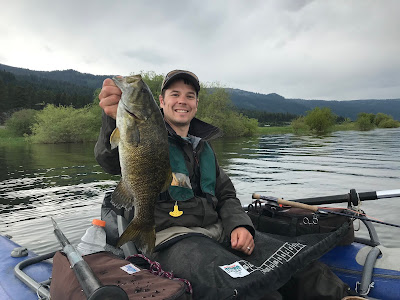 We also stumbled upon a couple pike minnows. Between wanting to kill them for ecological reasons and never have eaten one, we put both on the stringer to eat later. This trip was turning redneck...

While Katie warmed up our planned dinner, Trevor and I set the pike minnows on the grill over the fire. We had no foil or seasoning to go along with them, so what we would taste would be truly squawfish. We also grilled up a couple hotdogs to go along with them. Hotdogs and squawfish, the phrase sounded so gross it made us laugh. Once the fish began to fall apart, we scooped them onto a plate and dug in. The pale, bland and slightly fishy meat reminded me of a fish I haven't eaten in years: trout. It was edible but less than exciting. It was also full of small Y-shaped bones that appeared to be in every bite. We ate most of the 2 fish and burned the remains. I can now check eating squawfish off my list. If you think trout taste good and like picking bones out of each bite, give pike minnow a try! 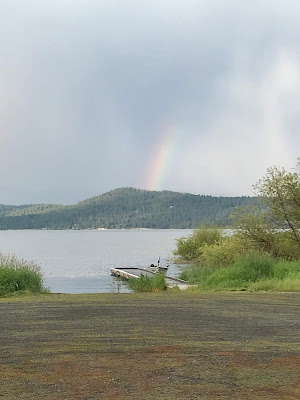 After some debate we decided to go out and fish. It was a good thing we did, because we ended up catching several more perch and bass. 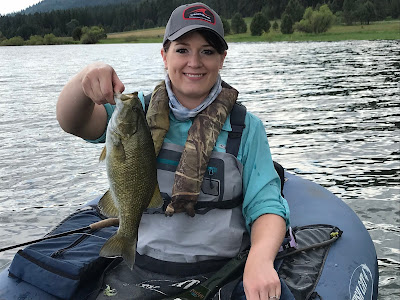 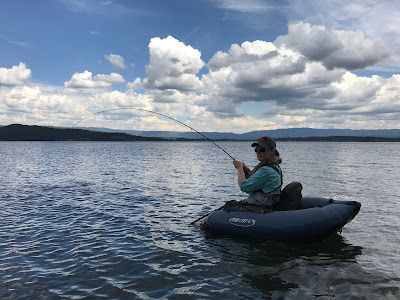 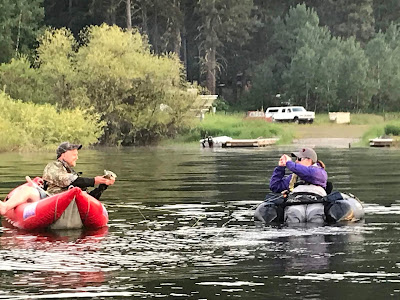 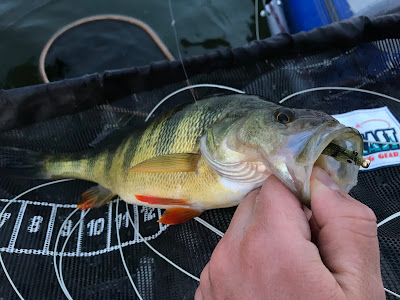 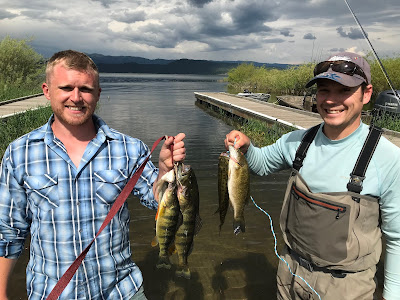 The following morning we went back out in the boat with our friend. We tried a new location and it ended up being fairly decent. Our friend landed a few perch, a trout and a bass, while I ended up with one perch.

We packed up camp and headed home with several large perch fillets in the cooler. I am glad we gave Cascade a try, giving us a new place to fish. We never saw another fly fisherman and ran into very few other anglers. Although fishing was tough, we tried a new body of water and were successful in finding a few of our targeted fish. We all had caught the largest perch in our angling histories. We will surely return to Cascade in the future. Like I said, until you see a 16 inch perch you won't understand. They are like perch, only bigger!