It had been a full year since I had taken my nephew Henry fishing. He was now just over 4 years old and his coordination had improved dramatically, as well as his attention span. It was time to test both of those on some local Largemouth Bass!
I called up my friend Jim to secure permission for my wife and I to take Henry fishing. Jim lives in a subdivision in Eagle with 2 ponds filled with bass and bluegill; the perfect place for Henry to catch his first bass. Jim was happy to give Henry the opportunity of his first bass, and with a backpack full of snacks and a few plastic worms, we were set up for a great evening of fishing.
According to my sister, Henry was so excited to go fishing that he refused to eat any lunch and refused to take his mid-day nap; not too unlike myself, and hopefully the making of a fishaholic. I set up Henry's rod with a bobber and a wacky rigged plastic worm and helped him make his first cast. 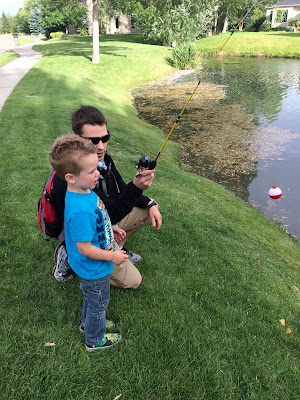 "Ok Henry, now you're just going to reel a little bit and then stop. Then reel a little bit and stop." I said to him, as my eyes scanned the clear water for cruising bass.
"Ok!" He replied enthusiastically as he reeled the bobber in.
Our first cast didn't produce anything, so we walked several feet away and casted to a different area. Henry reeled the bobber in just like I had told him, only this time, I had him pause an extra moment right on the edge of some surface scum. Immediately the bobber jolted and began taking off at a rapid pace.
"Henry you got one! Lift the rod and start reeling!" I said excitedly. 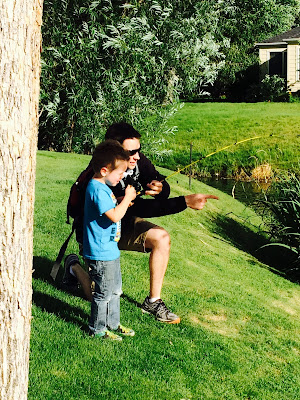 Henry reeled with all his might. The 4 foot kids rod and cheap push button reel were being tested to their limit. The bass pulled hard and I even grabbed the back of Henry's shirt to make sure he didn't fall in. Like all good bass do, the 16 inch fish made his way to the surface and jumped. But as he did, he shook the hook.
"Oh no, Henry! He got off." Katie said with a frown.
"That's OK Henry, we'll get another one!" I said as I checked his plastic worm for damage. "You want to do that again?"
"Yeah, that was fun!" Henry replied with a big smile. 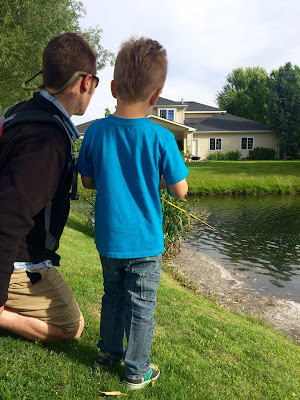 We made another cast and this time, the bobber plunged halfway back and nearly ripped the rod out of Henry's hand.
"You got another one Henry! Reel, reel, reel! Now start backing up slowly." I said, as I ran down to the water to lip Henry's bass.
This fish was a bit smaller, but still nicer than most you'd find in a public pond. I lipped the bass and brought it up to Henry. 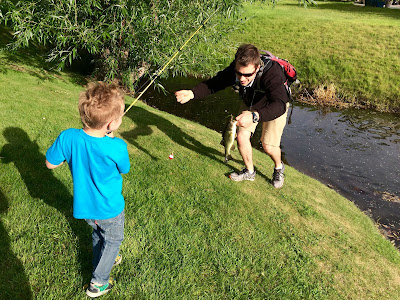 Henry was grinning from ear to ear as I showed him his fish. He even reached out and touched it.
"Henry, feel his lip here." I said, pointing to the lower lip's pad of teeth. "It's like sandpaper. Those are his teeth."
Henry cautiously reached out to feel the bass's teeth and giggled when he felt it. 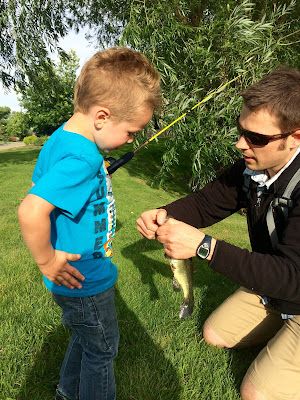 "Ok Henry, now we need to get this fish back into the water."
We released the fish and Henry was ready to catch another one.
We walked over to another spot and started fishing again. 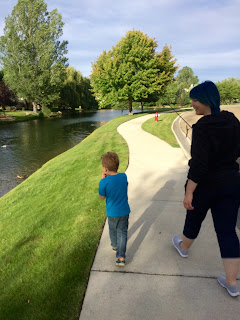 Just a few casts later, Henry was into another feisty bass. At 6 inches per hand crank, the slow retrieve speed on the small push button reel forced Henry to back up as he reeled to keep the line tight. Henry battled the fish like a champ and soon I had the bass lipped and ready for a picture. 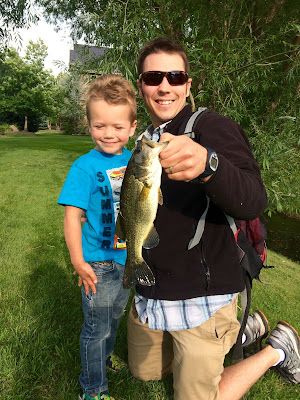 Henry seemed to still be having fun, so we continued on.
"Look Henry, duck butts!" Katie said enthusiastically and pointed to a pair of mallard ducks feeding on some aquatic plants, forcing their butt's high above the water and their small orange feet kicking on the surface.
"Duck butts!" Henry repeated and pointed.
"Look Henry, there's some more." Katie pointed to another couple of ducks.
"Duck butts!" Henry repeated again, appearing to enjoy saying the phrase.
"Ok Henry, let's catch another fish!" I said, casting his bobber back into the pond. "Ok reel Henry, reel."
Henry reeled a bit and then stopped, and then began reeling in again. The bobber shot off to the right and took a dive under the surface.
"You got one, Henry!" I said, lifting the rod for him to make sure he got a good hook-set. "Reel, reel, reel!"
Once again, Henry did a great job of keeping the line tight and bringing the bass to Katie's hand. 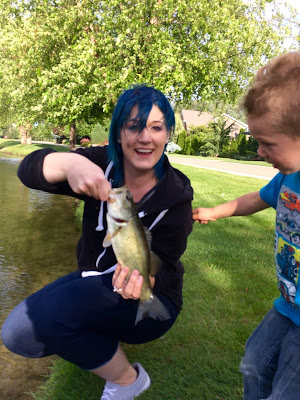 Katie released the bass as I checked the integrity of the plastic worm. 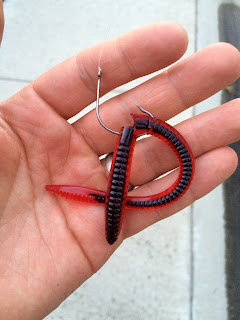 The worm was about to break in half but a quick fix placed the worm back in service. One downside to fishing plastic worms wacky style is how frequently they break or fall off. Most trips, I'll burn through at least half a dozen of them.
Henry was back onto the "duck butts", and seemed less interested in fishing now.
"Henry, you want to keep fishing?" I asked, enthusiastically.
"You should fish, I'll watch. I'm hungry."
Katie and I looked at each other and knew we better not push it. If Henry was getting bored, it was time to call it quits.
"Shall we go back to the car and eat something?" I asked.
"Yay!" Henry replied and started walking back toward the car.
We sat down and ate several snacks until Henry was satisfied. We had only been fishing for about an hour and I was secretly hoping Henry wanted to keep fishing.
"Henry do you want to fish some more?" I asked, smiling.
A small piece of me died inside as Henry replied, "No, I'm good."
"Okay. Let's head on back." I said, as we loaded back into the car.
"Can we make planes out of legos when we get back?" Henry asked with enthusiasm.
"I think we can do that." I replied, smiling, thinking about my obsession with Legos when I was Henry's age. Maybe there's hope yet.
One minute later, Henry was out. 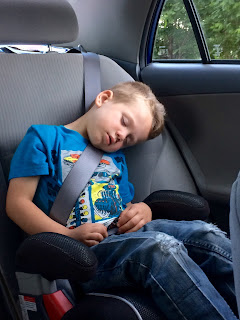 Posted by Ryan's Fly Fishing and Hunting Blog at 3:52 PM No comments: