Idaho Shiras Moose Hunt - August Scouting and September Hunt 2021
In 2021, I was fortunate enough to draw a once in a lifetime bull moose tag in Eastern Idaho. Even better, so did my dad! With almost 3 months open to hunting, we could plan multiple trips; all in an attempt to hit the moose rut.
All of my research had indicated the Shiras Moose rut coincided with the elk rut; last couple weeks of September to early October. So that's when I planned the first 2 trips. My dad was supposed to be retired, but took an out of town job at the last minute that would keep him in Arizona for the next 2 years. He would only be able to make an early October trip.
I was fairly familiar with the area, but an August scouting trip was still in order. Joining me of course would be my wife, Katie; because... fishing!
Katie and I made the long trek over to the other side of the state and set camp in a central location in my unit. The next 3 days, I made some morning hikes, set some trail cameras and got a feel for the area. On one of my morning hikes I ran into 2 different sets of cow and calf moose in one creek drainage.

Katie and I also fished some local waters, catching some dandy Yellowstone Cutthroats. 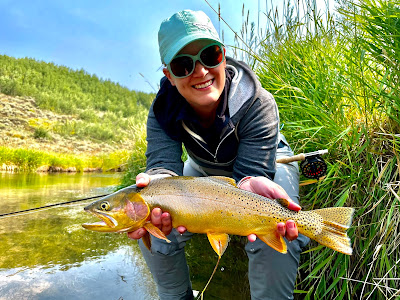 Katie and I drove most of the roads to see where all the access was. On one drive we ran into a local named Charlie.
"Oh you won't see any moose this time of year. They hate the heat like no other. You'll want to be here October 15th and on. The 20th is about the peak of their activity." Charlie said, after I inquired if he'd seen any moose.
"Darn, my trips are early," I responded.
"Most guys hunt early and settle for a small bull, the big ones are like ghosts until later in the season. They just magically appear."
Charlie offered to show us a few spots and we even went to his house to see all the big animals he's shot over the many years living there, including moose.
Despite our new knowledge, my trips were set in stone and I'd just have to make the most of them. I would attempt to plan another trip in early November if I hadn't filled my tag by then, for I had already filled up the rest of my October with an elk hunt and Utah deer hunt.
My anticipation was high come September when it was time for my first hunt. Joining me would be my father-in-law, Rick. I had studied up on moose calling and thought I sounded fairly moose-like. Calling in a moose would be an unforgettable experience. 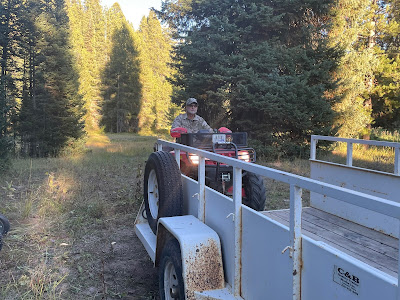 Rick and I started the long journey over, stopping in Burley for some lunch. We were eating our lunch in a parking lot when I looked up to see a Little Caesar's pizza in front of us. "Gosh Rick, we could have gotten pizza for lunch."
"Yeah, that would have been a good idea!" Rick replied.
We finished lunch and continued the drive to camp. 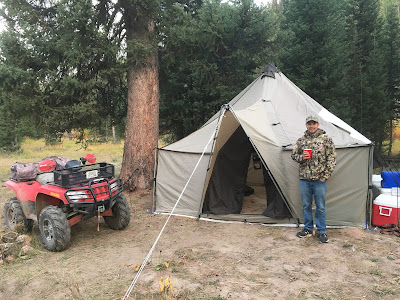 We set up camp and began the hunt! Unfortunately, the weather was not on our side. Like most Idaho Septembers, it was still quite warm and all week it was suppose to be sunny. But we were there and we'd have to make the most of it. 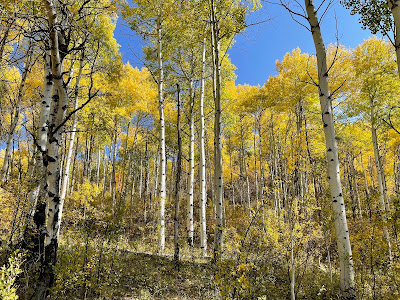 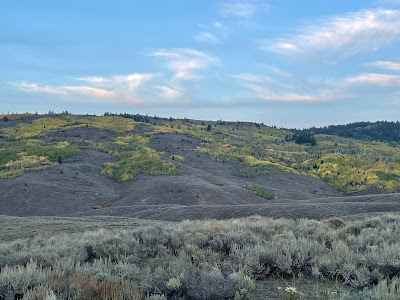 We hiked trails and old roads, sat in likely spots in the mornings and evenings and tried calling in various places. 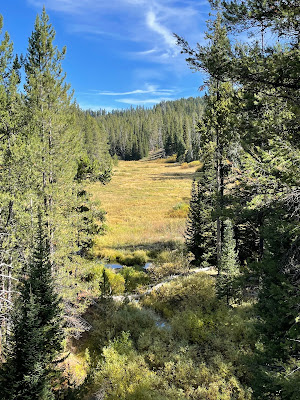 For the most part, the country was pretty thick with brush and timber, so glassing was tough. 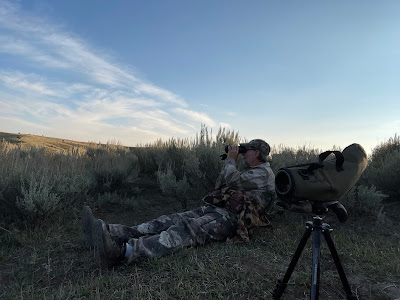 Several days passed before our first moose sighting. After a long morning hike, Rick and I sat in folding chairs at camp to rest and recover.
"Gosh, some leftover Little Caesar's pizza would sure be good right now." Rick said, regrettably, as he ate some canned sardines.
"Why didn't we just get one to-go?!" I replied, shaking my head. "I can't believe we had that opportunity staring at us and we still missed it!"
"There's a moose right there!" Rick said suddenly, pointing to a strip of trees 50 yards away. "Grab your gun!"
I looked over to see a cow moose and her calf slowly walking and feeding on mushrooms. Both looked over at us without a care in the world. I grabbed my gun and walked closer to make sure no bulls were near. It was just the pair, so we began to take some photos and admire the carefree, yet somehow elusive animals. 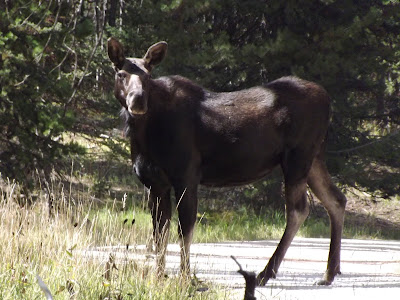 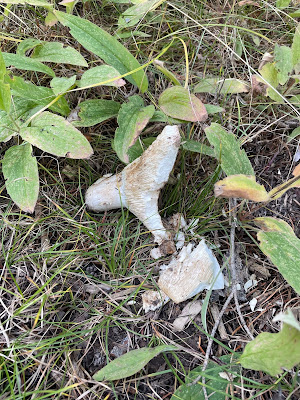 The pair wandered off and Rick and I looked at each other.
"I guess they're around." I said, shrugging my shoulders.
Rick and I hadn't seen many tracks or sign anywhere except in this creek drainage where camp was set up. We'd tried numerous other places without a sign. We now knew if we wanted to maximize our efforts, it would likely be staying close to this drainage. The problem was the weather. It was nearly 80 degrees most days and the nighttime lows were just above freezing. If the moose were in the rut, they were doing it at night. We'd had no responses to our calls and still hadn't seen a bull; not even on trail cameras. 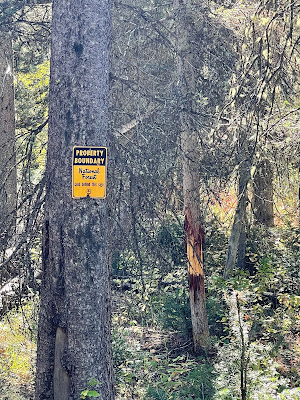 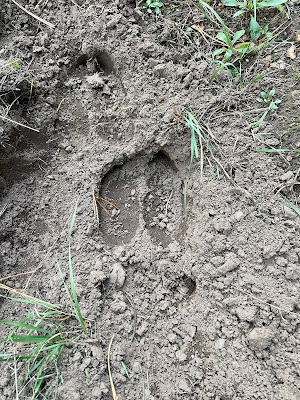 One day we ran into an archery elk hunter who had encountered a bull moose just up the creek from camp. He said he caught a glimpse of a bull moose but couldn't tell how big it was. He pointed to an old road where the encounter had occurred. The next morning we walked that road. It slowly took us to a saddle that marked the start of another creek drainage. On the way back I ditched the road and slowly worked my way down the creek. The creek was sheltered by old growth timber, making it dark and cold. If there were bull moose around, this seemed like the place they could be hiding. I suddenly cut a fresh moose track and began to follow it. I had only walked a few steps forward when I heard a loud crash up ahead. A huge animal went thundering through the woods. That has to be a moose. I ran forward to try to get a glimpse of what I had just spooked, but the forest was just too thick. Whatever it was got out of there in a hurry and the woods were empty and dark once again. I tried to follow the tracks but the ground was just too dry and covered with vegetation. That had to be a bull!
I came back to camp and told Rick about my encounter.
"That's cool. You know what sounds good for lunch?" Rick asked.
"Little Caesar's pizza." I replied.
We both got a good chuckle. This became the running joke the remainder of the trip.
Excited about my moose encounter, we began to work all the deep, dark fingers of this creek. "Timber pounding" became the name of the game. I hate this style of hunting, but it was my only option if I wanted to kill a moose on this trip with these conditions.
The country was thick and visibility was limited in most places. If I bumped a bull moose, I'd likely only have a short shot through narrow lanes of timber and brush. 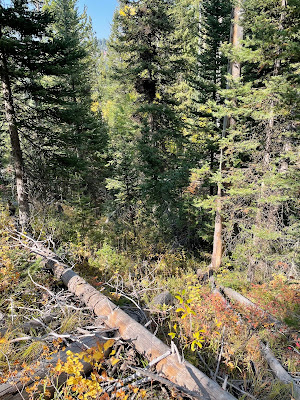 I found moose sign in almost all of my walks but it was hard to tell how fresh it was. I did, however, find some cool elk rubs and wallows. 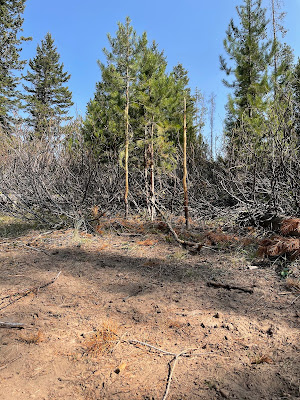 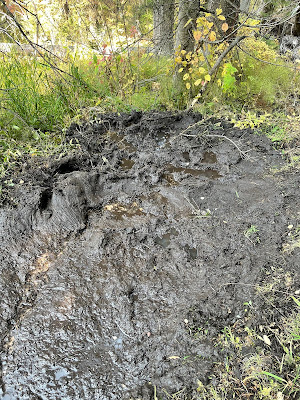 I even found a curious Pine Marten! 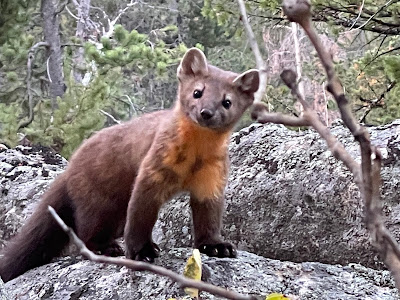 And a Great Gray Owl! 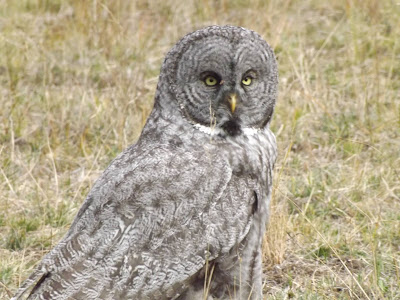 Towards the end of the trip, Trevor, my brother-in-law, came over to help. We hiked up the creek to where I'd encountered the moose in the timber. Maybe we'd be able to call him out into the open just before dark. Trevor and I got into strategic positions where he pretended to be a bull down in the creek bottom grunting and raking on the trees and I was a lonely cow. I was sitting behind a log with a clear view of the meadow. 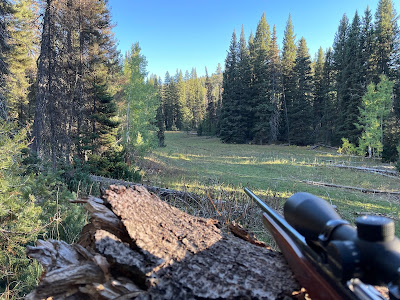 Before we knew it, darkness was upon us. The moose were just not in the rut yet.
The next morning I decided to walk down through that patch of dark timber one last time. The trip was nearly over and this spot was the only place I had confidence there was a bull. I slowly crept down a game trail, mindful of each step, eyes scanning everywhere they could. There! To my left I spotted something dark. Moose! But they were already onto me. Behind some trees I caught a glimpse of some antlers just as the moose turned to trot away. Then another moose appeared, also sporting some headgear. The trees were so thick I couldn't even tell how large the antlers were on either moose, let alone try to get a shot. The 2 bulls went crashing away up the hill. Darnit! They had surely winded me. Why were these moose so skittish? Most places with moose you're more concerned about them attacking you. The bulls clearly knew I was a threat. These September moose were definitely like ghosts.
I sulked back to camp realizing I would not get a moose on this trip. I would be returning in 4 days with my dad. Hopefully conditions would change and so would our luck. 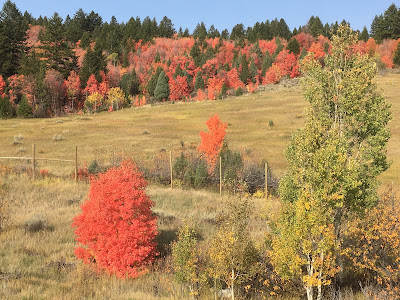 We packed up camp and headed towards home. But there was one stop we had to make: Little Caesar's. Was it as good as we built it up to be? Not quite. 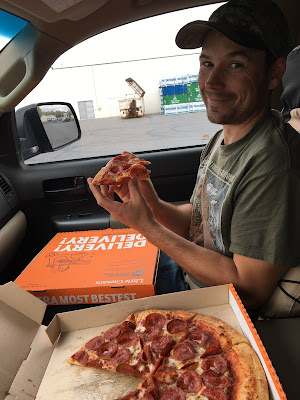 Posted by Ryan's Fly Fishing and Hunting Blog at 7:41 PM No comments: