One day while working at the fly shop, I received an anonymous tip that large trout were being caught at Crane Falls Lake. It was early March and the ice had only recently receded enough to float tube there. Intrigued, I checked Idaho Fish and Game's website for the stocking report; a valuable resource for catching trout. The historic stocking report showed F and G had planted catchables (8-12 inch) in October and adults (16-24 inch or "brood stock") in November. Excited for the potential to catch winter "carryover" rainbows in addition to big ugly brood stock found me at Crane Falls on a mild March day. 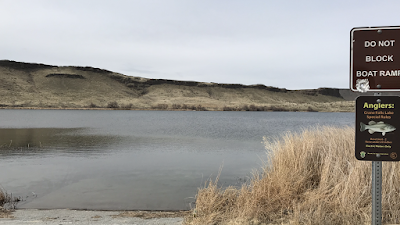 Joining me on my first still water trip of the year was long-time family friend, fishing buddy and godfather, Bruce Schuld. 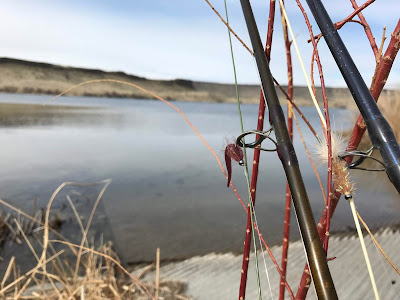 The weather was perfect; cloudy and calm with temps near 60. The water was very clear and aquatic weeds could already be seen growing in clumps, stretching into the depths of the lake. Early season trout tend to cruise near the surface or near the shore, so I set up a rod with an intermediate line and a leech. I set up my other rod to bobber fish with a balanced minnow.

Bruce and I kicked out into the lake just past the edge of the weeds. On my first cast, a couple strips in, I felt the quick jittery take of a scrappy rainbow trout. Slow to the take, I missed numerous fish on my first several casts before finally connecting with one. 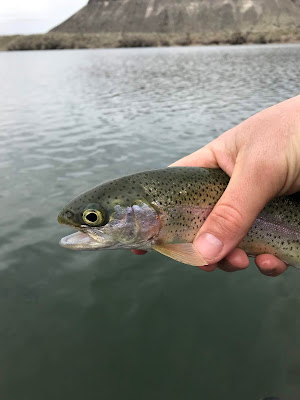 Bruce was also experiencing the same action. We had only kicked a few yards past the weeds and were immediately into a ton of fish. Bruce was using a large leech trailed by a small green Carrey Special. 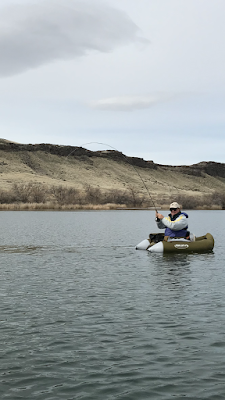 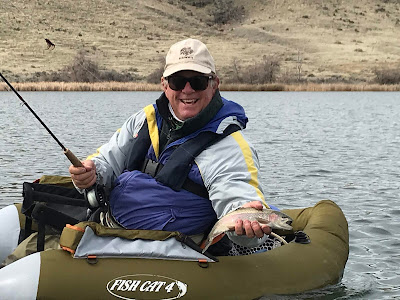 The next couple hours were filled with action as we worked around the edge of the lake. We both caught plenty of 9-14 inch fish.

Although the water temperatures were cold, I suspected a few largemouth bass could be plucked from the bottom. I switched rods, casting my balanced minnow to the visible clumps of weeds climbing to the surface of the lake. The minnow took a couple trout before I set the hook on a heavy, bottom hugging fish. A bass surfaced near my tube, lethargically shaking it's head. I was pleasantly surprised to lip an Idaho largemouth bass in March. 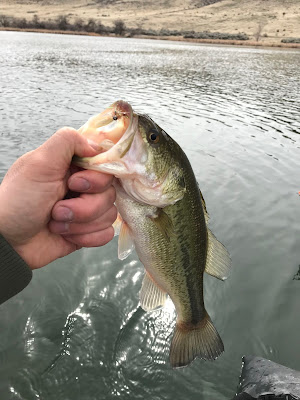 We kicked back towards the truck and as we neared the weed line, Bruce hooked into a monster. I quickly kicked over to see what he had caught. 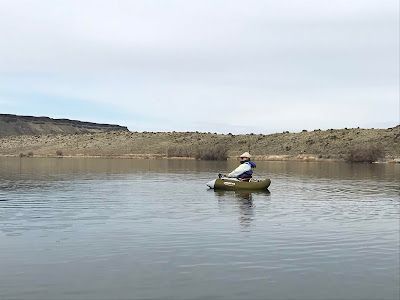 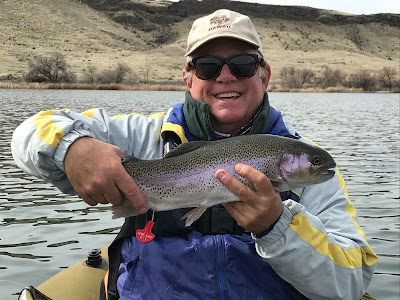 Although not the prettiest fish, this brood stock rainbow demanded a picture. At 20 some inches, she could get anyone's heart pumping.

We came in for lunch to warm up our feet. The day so far had been great and the weather beautiful. There were still many more fish to catch and I hadn't given my bobber enough love. In the morning I caught most of my fish stripping a leech but I knew it was time for some bobber dunking! I switched from the minnow to a balanced damsel. 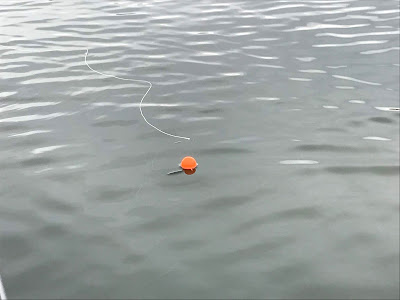 We kicked out to the weed edge, but instead of continuing to kick and troll near the edge, I camped out on top of a weed clump and strategically placed my casts toward the dark water near the weed clumps. 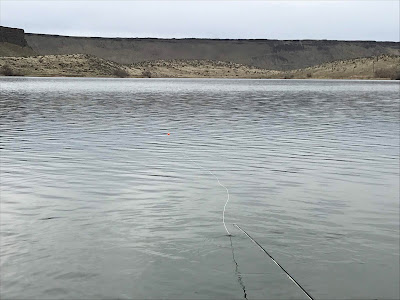 Every cast resulted in a take down of the bobber and soon I was bringing in a fish nearly every cast. 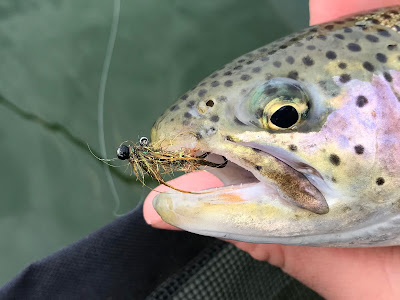 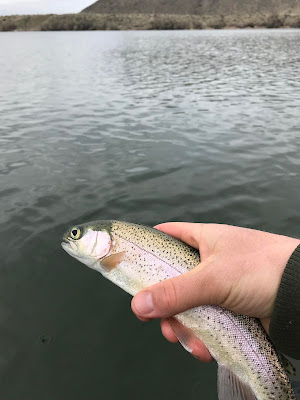 While I was racking up numbers of fish, Bruce was concentrating on finding another bruiser. His efforts paid off with a great 18 inch fish. 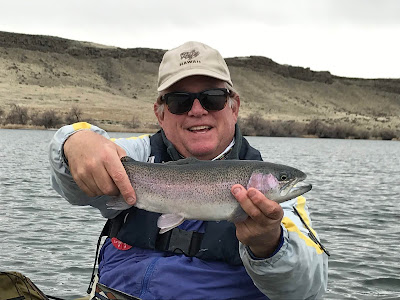 "Ryan, you can have all those little minnows, I'm going to stick with catching these big fish." Bruces said with a wry smile.
"That's fine, I'll get a big fish one of these casts." I replied.
I eventually did, but lost it near the boat. Meanwhile I continued to catch many smaller fish. 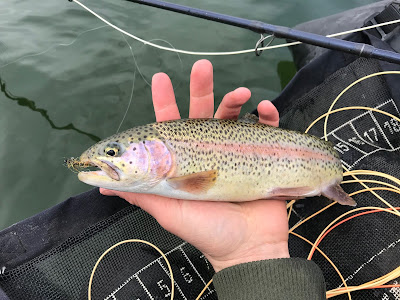 Bruce's action had slowed considerably in the afternoon, but the balanced damsel under a strike indicator had been the ticket. When that started to slow, we knew it was time to head home.

Crane Falls was an excellent way to kick off the 2019 still water season. We estimated catching approximately 50 trout and 3 largemouth bass. Checking Fish and Game's website for historic stocking is a great way to identify potential early season hotspots. Better yet, Fish and Game announced they would be planting another 1,200 catchable rainbows the last week of March. It's time to dust off the float tube and give Crane Falls a try! You may even catch a monster.

Posted by Ryan's Fly Fishing and Hunting Blog at 11:06 AM No comments: