I'd waited for this day for a couple months. Jim Bottorff, of Bottorff Guide Service, had been sending me pictures of stacks of speckle belly geese from last year. Jim had promised me a spot on a special spring goose hunt in Eastern Oregon. Jim guides waterfowl and fly fishing in Oregon and certainly knows his stuff when it comes to both. It was no wonder I barely slept the night before our hunt. At 3 AM, I sprang out of bed in anticipation of a great hunt.
Greater White-Fronted geese, or "specs" as most call them, are a species of goose marked by dark bands across their bellies. They also have orange feet and a pale, pinkish bill. They travel through in late winter on their way back North to their breeding grounds. For some reason, they tend to only travel the Idaho, Oregon border, so most people in Idaho don't see much of them. Snow geese also travel with them and can be seen in massive numbers this time of year as well. Jim concentrates on the specs because they tend to be a little easier to hunt. Add a generous limit of 10 geese per person and you can see why he's booked solid for this special season.

I met Jim at 4 AM and we headed off to meet up with a few more guys that would be joining us for this "preliminary" season hunt. We met up with Jim's son, Bryce, as well as Blake Brown and his son Hunter. Blake owns a waterfowl call company called Browns Waterfowl calls. A couple of his buddies would also be joining us. We followed Blake to a field he'd scouted the day before. We all helped gather brush from the edge of a small creek. We would need this brush to help conceal our blinds in the field. 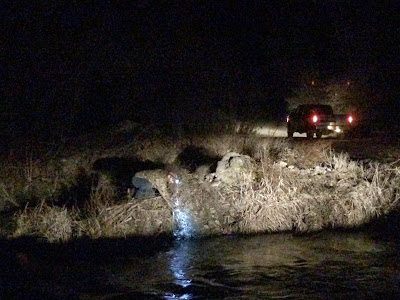 We threw all the brush into the back of a couple trucks and drove the rest of the way to where we would set up. I helped brush up the blinds while Jim and Blake set up a small spread of spec decoys. 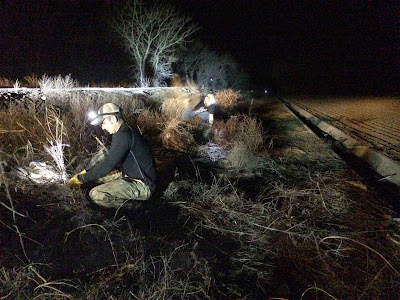 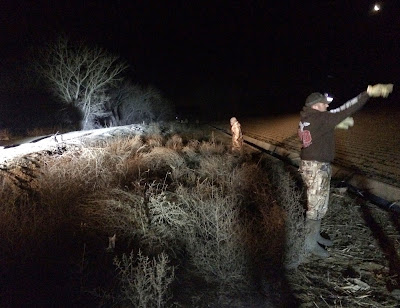 You could hardly tell there were 8 blinds along the ditch when we finished. Concealment is imperative in waterfowl hunting and I think we had that taken care of. Seven AM came quickly and we all hopped into the blinds and eagerly awaited the first flight. 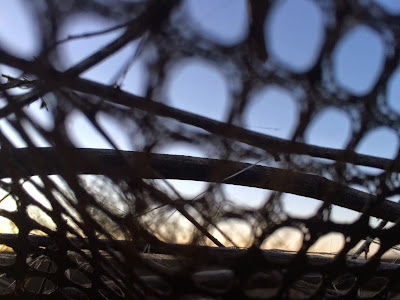 It wasn't long before we heard the first group of specs coming our direction. Like a high pitched Canadian goose going through puberty, the speckle belly goose has a distinct voice. I was practically trembling with excitement as the first group began to circle. Through the mesh in the blind I could see them working our decoys. Another group showed up and began to circle as well. 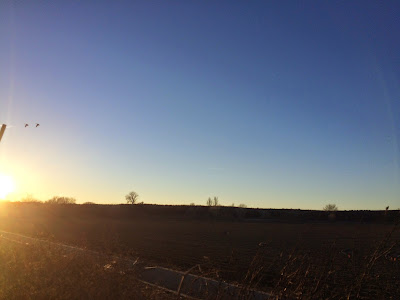 Those geese eventually left, but in the distance we could hear more coming. LOTS more. The first big group showed up and began circling. Then some more, and more, and more! As they got lower and lower it looked like we might get a shot. Several small groups had landed in our field just out of range. A big group of snow geese showed up and joined the couple hundred specs that were circling our field. I was so excited I was shaking in my blind. I wondered if the many eyes circling the field would spot my uncontrolled movement. Most of the birds were now landing in our field. More geese showed up and joined the group in the field. Through the mesh and brush I could see the snow geese, who stuck out like a sore thumb in the bare dirt field. By now there had to be a few hundred birds in our field and more were working. It was quite noisy with so many birds on the ground and in the air. We knew it was only a matter of time before a group came over us.
I eyed a low group of 15 or so birds that looked like they might be the catalyst to mayhem. From the right side, I could see them swing around and close in on gun range. Jim and Blake let out a few clucks to help guide the birds our way. The birds responded and flew right towards us and into range.
"Let's get 'em!" I heard from the far end of the line.
We all flipped open our blinds and began shooting.
BOOM, BOOM, BOOM! Shots rang out and birds fell.
We dropped several birds and the whole field erupted. All the geese that were in the field flew off. We quickly jumped out and retrieved our birds before the next ones came. 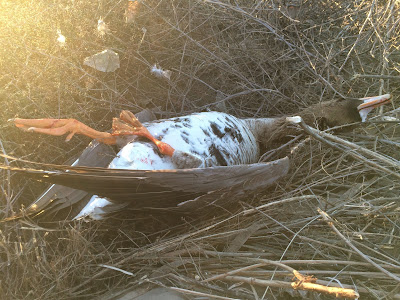 I set one of the birds next to my blind to admire. Seeing orange feet on a goose was foreign. I barely got a chance to look at the bird before the next group approached. We all covered up in our blinds just in time to see a group lock their wings and decend upon us. They made a few passes before making a fatally wide swing.
BOOM! BOOM! BOOM! BOOM!
A few birds fell and Hunter ran out to grab them. 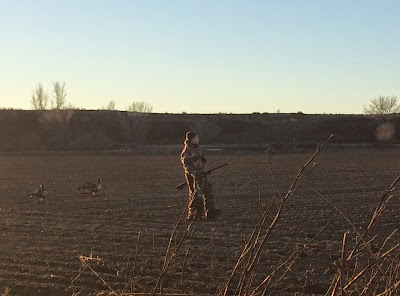 We all quickly covered up, because another group was coming. 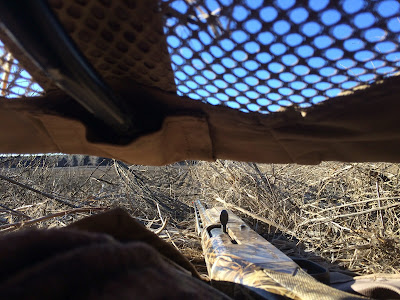 A group of 10 or so birds circled a couple of times before giving us a great shot. BOOM! BOOM! BOOM! Several more birds fell. This was turning into a fantastic hunt. Hunter once again ran out to grab some birds. 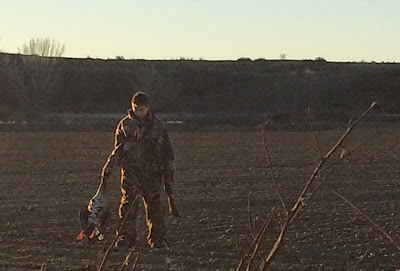 It was crazy to see birds so attracted to a plain, dirt field. The farmer had just seeded the field and it made me feel even better inside knowing I was helping a farmer from almost sure destruction from so many hungry birds.
A couple more groups of birds gave us shooting opportunities and before long we had a decent pile of geese. 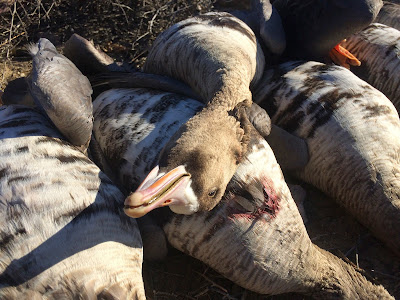 By 10:30 AM, everything had slowed down and we decided to pack up. It had been a wonderful hunt and even though we didn't kill 80 geese, it had been fun. This was just the beginning of the season and more birds would be coming as the season progressed.
Hunter held up a couple fist-fulls of geese for a happy hero shot. For a great waterfowl hunt or fly fishing trip, definitely give Jim Bottorff a call! 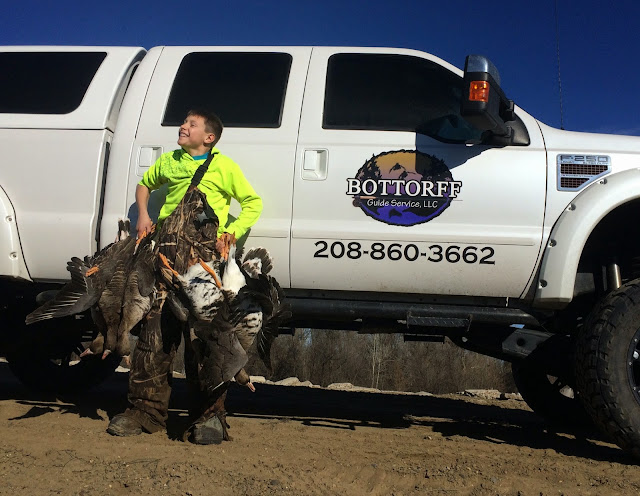 Posted by Ryan's Fly Fishing and Hunting Blog at 8:15 AM