I met Terry at his house early on a late July morning. Terry and I had not fished together since last summer and neither of us had floated the South Fork of the Boise this year. I threw my gear in his truck and we took off for the South Fork.

As we approached the Cow Creek bridge, it was apparent that Mormon crickets were a possible food source. Large black crickets peppered the road and the Cow Creek bridge.
"Should we toss a few in and see if they're eating them today?" Terry asked with childish delight.
"Sure!" I responded, already envisioning the likely results of our test.
We both grabbed a cricket in each hand and walk onto the bridge. The river left bank always held a few fish and we knew right where they lived. Splat, splat. Two dark crickets hit the water hard but floated in the surface film down the bank alongside the willows. Shhlurp! Shhlurp! Two large rainbow trout made quick work of the chunky crickets. Terry and I looked up at each other with wide eyes.
"Let's float this section first!" Terry said.
"I think that's a great idea!" I responded logically.
We dropped off the shuttle bike at the take out and launched the boat at Cow Creek. We rigged the "big bug" rod with a Mormon cricket pattern and another smaller rod with a grasshopper. 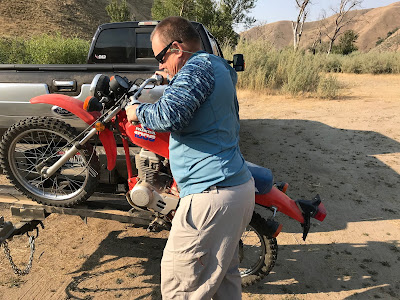 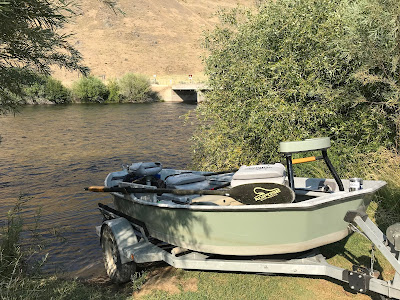 We pushed off from shore, myself in the front seat ready to fish first. I began casting to the willow lined banks, my fly drifting in and out of the shadows. Shlurp! A large golden rainbow came up and devoured my fly right where it should. I brought the fish in and quickly released it. We had only drifted downstream a couple hundred yards.
"Ok Terry, you're up!" I said, setting the rod down in the ready position, 30 feet of fly line out of the reel.
In Terry's boat we use the 3 strikes you're out rule and the one fish landed, swap rule. I landed my fish so it was now Terry's turn at bat. 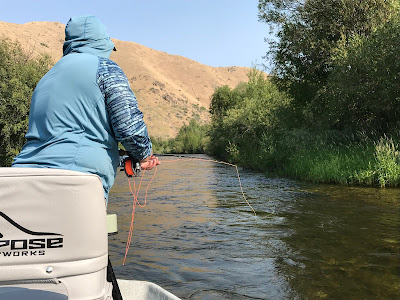 Terry worked the banks, threading his fly in and out of the bushes. It wasn't long before he was into a nice fish of his own. 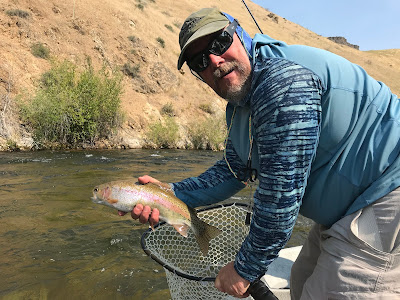 We swapped again, this time I missed 2 fish before connecting with the 3rd, a rainbow at about 18 inches. The fish kicked the fly at the boat; a perfect release. Terry was up again. Terry and I made 2 swaps before we reached the take out of our short float.
"Let's do that one again!" Terry said, taking into consideration our success and earliness of the day.
"Makes sense to me." I responded, as I held the boat so Terry could exit and make the shuttle.

I had always wanted to fish streamers on the South Fork from the boat but had never committed to doing it. While Terry was running the shuttle I rigged up my other rod with a money minnow and began casting it from the shore at the take out. My sparkly minnow danced in the water. I was only checking how the fly looked in the water when a large flash darted at my fly, inhaling it. I set the hook and fought the large rainbow from the boat. Seems to work pretty well. I netted the fish just as Terry returned with the truck and trailer.
"Fish took a streamer. I think I'm going to try this on our next float." I chuckled, as I released the fish. 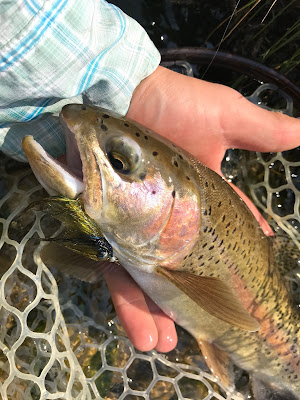 We launched the boat at the same spot as before. Once again, the fish were eager to rise to the cricket pattern. We lost a few flies in the trees and tied on a large purple chubby instead of a cricket. It also worked confirming my theory that these fish will eat almost anything big and buggy when placed in the right spot with the right presentation.

I landed a chunky rainbow that had a long synthetic line coming out of it's throat. I have caught steelhead with these before and was informed they are some sort of tracking device. I could only assume that's what it was. If anyone knows, please let me know. 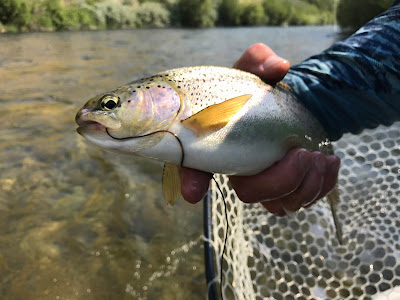 We finished up our second brief float shortly after lunch time. Our next float would be from the village down. We made our shuttle and by 2 pm were were launching at the village put it. We made our way down the river. Yellow sallies could be seen fluttering around, so we tried a yellow sally fly. It worked, producing a small scrappy fish. 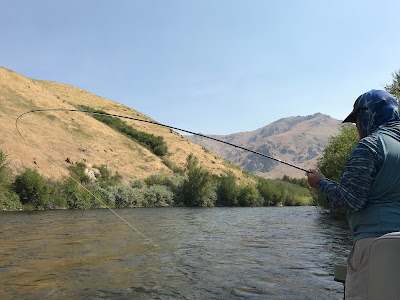 We entered a side channel Terry had named "Muggers". We pulled into a back eddie and anchored up, watching for rising fish. Sure enough, fish rose here and there. We tied on a pink Albert and began targeting rising fish. It didn't take Terry long to connect with a nice rainbow. 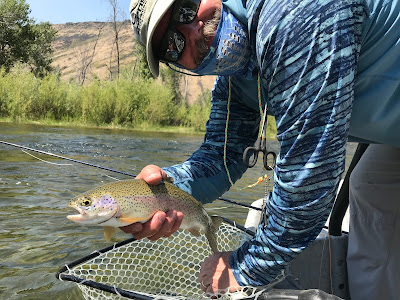 The current seam we were fishing was very slow, causing the trout to cruise in and out of the back-water instead of holding in the current. This made it tough to anticipate where the trout would be and therefore where to present your fly. Eventually I timed a cast right and was rewarded with a nice trout.

After playing with these rising fish for probably too long, we pulled the anchor and drifted down to another spot looking for pink eating trout. Once again, a healthy population of fish were feeding on the surface. Terry and I each connected with several fish at this location before moving on. 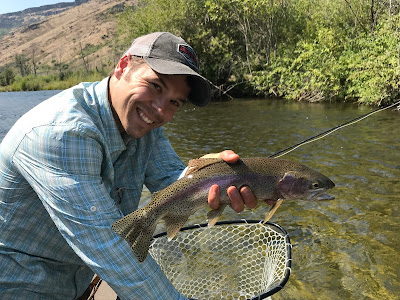 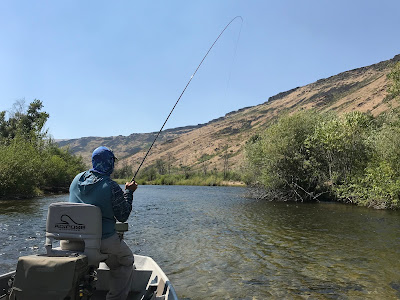 As we drifted down the river, it was obvious this stretch received the bulk of the fishing pressure. Not only did we see a lot of boats, but the fish were not eager to rise to our attractor patterns like down below. Our solution: a Ken Held hopper. As realistic of a hopper pattern as it gets. This 1 hour long tie can fool both fish and humans alike. Armed with this fly, we finally started seeing looks from the fish. 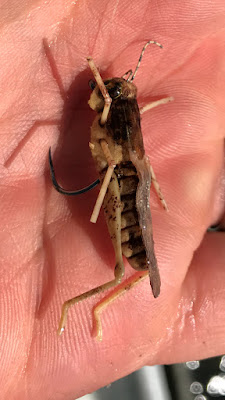 Fishing was still tough until we made it past the common take out location. Like magic, the fish started looking up again and Terry responded with a dandy fish. 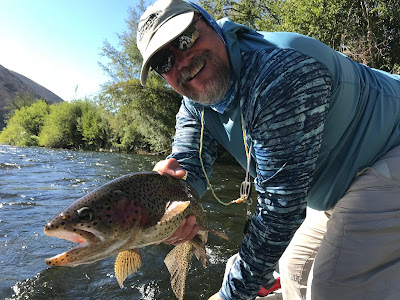 We each landed a few more fish before we reached our take out spot. It had been a long but fun float down one of my favorite rivers. With the boat on the trailer, we drove over the Cow Creek bridge to head home. Terry slowed as we reached the other side.
"Shall we grab a couple more crickets and feed the fish before we leave?" Terry questioned.
"I was hoping you'd say that..." I responded with a smile.

Posted by Ryan's Fly Fishing and Hunting Blog at 7:05 AM