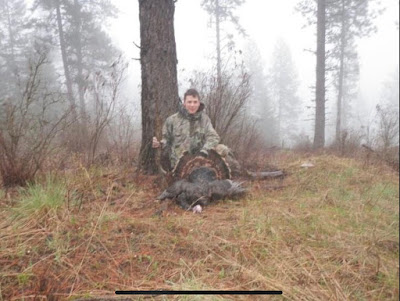 "We'll be able to shoot them right off the front porch. It won't take more than 20 minutes, I promise." Kevin assured me.
"We'll see about that." I replied with suspicion.
Kevin and I were driving north to St. Maries on a turkey hunt. Our friend Cameron grew up there and his parents still had a place with a little land adjacent to public land. The last time Kevin was there, the turkeys were just hanging out in the yard. Kevin had never hunted turkeys before, and based on what he'd seen there, he assumed it would be a walk in the park. Turkey hunting is rarely that easy.

We arrived near dusk to find no turkeys in the yard. Imagine that. Tim, Cameron's dad, welcomed us and helped us settle in for the 2 day hunt.
"The turkeys haven't been around too much. This time of year I just mostly hear them every now and then. Just tromp around back there in the woods and you're sure to find something." Tim said, waving a hand in a general direction.
I gave Kevin a look that said, I told you so.

Tim agreed to take us to a piece of public ground near the lake where he'd seen some turkeys recently. At first light we were walking away from the truck in pursuit of the American Wild Turkey. By noon, however, we'd nearly climbed a mountain and had only seen one hen turkey and found a whitetail deer antler. We decided to return to the house and "tromp" around in the woods near there. We returned to the house to find no turkeys in the yard.
"Hey look Kevin, no turkeys in the yard." I pointed out.
"Yeah, yeah. I see that." Kevin shook his head.

The public land behind Tim's house was a medium sized, forested plateau with a mountain on the north end. Kevin and I headed east from the house, crossed the creek that marked the property boundary and climbed on to the top. Once on top, we found an old road that followed the edge of the plateau. We walked slowly and quietly, calling from time to time. No birds responded, but we did catch a glimpse of a wolf running across a meadow on the other side of a canyon. Kevin and I sat down and began watching the hillside across from us where a big tom turkey appeared and began strutting. He was nearly a half mile away and our calling illicited zero interest. The old road took us to a nice opening that overlooked another creek bottom. It was now mid-afternoon and we were both tired. We each picked a tree to rest against and take a nap, hoping some turkeys would magically appear during our slumber.

I awoke to a noise on my right. Was that a turkey cluck? I slowly opened my eyes and turned to my right. Fifty yards away, 2 gobblers stood near the old road looking toward the creek. I froze. I looked toward Kevin who was in between the turkeys and myself on my right side. Kevin was also awake and aware of the birds. The 2 birds slowly walked forward and towards the opening in front of Kevin. I'm a right handed shooter, and based on the angle, it would be tough for me to rotate my body for a shot. Kevin had a greater advantage where he was located, so I just sat still. The 2 birds continued nervously forward until they were only 20 yards in front of Kevin. One of the turkeys suddenly took flight and glided across the creek bottom to the other side. Shockingly, the other bird just stood there; a fatal mistake. Kevin's shotgun rang out and in front of him lay his first turkey.

We took a picture, grabbed his bird and headed back to the house. We breasted and legged his bird, then put the meat on some ice. With just a little light to spare, we headed back out to the woods to locate a bird for me to chase at first light the following morning. Surprisingly, at the same spot overlooking the creek where Kevin had just shot his bird, we heard a gobble. The gobble was coming from somewhere on the other side of the creek or even down in the bottom. As darkness neared, we knew the bird would roost there and be ripe for the picking in the morning. We backed out of the area and had a solid game plan for the next morning.

At first light, we had our backs to some trees overlooking the creek where the turkey had roosted the night before. In front of us, motionless, stood 2 plastic decoys; a hen and a jake. The morning was very foggy and we could only see a few yards past the decoys. Then we heard him. The gobble carried through the fog, sounding like the bird was all around us. Goosebumps overtook my arms. Kevin clucked back at the bird on his slate call. "Gobble, gobble, gobble" rang back from the bird. We had his interest. Kevin and the bird talked back and forth, each time the gobbles grew louder as the bird got closer. The hill in front of us dropped off and the fog was still super thick. The gobbles were now so loud I could feel them in my chest. Any moment the bird could appear out of the fog. I could hardly contain my excitement. Then I saw him. Out of the fog appeared the tom turkey. When he saw the decoys, he puffed up in full strut, then let out a long, loud gobble. The noise was deafening at such close range. The bird paused for a second and gave me an easy 20 yard shot. BOOOOM!!! The bird expired quickly and our hunt was over.
"That was so cool!" Kevin said. "I can see why you like this turkey hunting stuff."
"That was much better than shooting one off the front porch!" I replied, still shaking.

We headed back to the house, cleaned the bird and packed up our things. On the drive home, along the Salmon River, we spotted an
osprey clutching a fish in it's talons as it flew over the highway in front of us. The bird was 20 feet above the road and I assumed he would gain elevation. As I continued at 50 mph toward the bird, at the last minute the bird dropped elevation and smashed right into my windshield. Kevin shrieked and ducked. I closed my eyes for a second and when I opened them my entire windshield was spidered. I slowed my truck and turned around to find a dead osprey on the side of the road. We felt really bad, but at least the bird died quickly. My windshield, though, was trashed. When I touched the cracked glass, small fragments fell. You could even see the slime smear from where the fish smacked my windshield. We looked all over for the fish but never could find it. I drove much slower the rest of the way home.

It had been a memorable turkey hunt. Kevin shot his first turkey and I had shot my second. We had to work a little harder than Kevin had expected, but I think it was much more fun than shooting them off the front porch.

Posted by Ryan's Fly Fishing and Hunting Blog at 6:58 AM