Backpacking in the Burn

Payette National Forest, August 2020
I hadn't done an overnight backpack trip since I was in Boy Scouts. So when a "backpacking guru" like Chase Jablonski, co-worker and fellow fly fisherman, suggested we go, I saw it as the push I needed to get back into it. When not working at the fire department, Chase spends most of his time nomadically hiking through the Northwest Rocky Mountains. With his expertise, I knew I would have a great time.
We decided to hike into a chain of lakes I had been to some 15 years prior. A simple day trip with my mother and her friend, the trip will forever be cemented into my memory as an angling failure. Armed with only a spinning rod and a handful of spinners and spoons, 15 year old Ryan thought he'd be prepared for any high mountain lake encounter with hungry, uneducated trout. I was surprised when we arrived at the first lake to find 20 inch cutthroat gorging on a flying ant hatch. Needless to say, not a single fish in that lake looked at anything I tried to present to them that day. I never made it back to that lake but you can guarantee I never hiked into a high mountain lake without some flying ants again.
We scouted the area on the map and decided to do a short loop in which we'd hit a total of 6 lakes, finishing at a trail that would eventually connect us back to the main trail we came in on. The 10 mile loop would be perfect for a simple overnight backpack trip.
With our packs loaded, we left town and made it to the trailhead by noon. The area was unrecognizable to me because a fire had swept through the area 3 years prior. 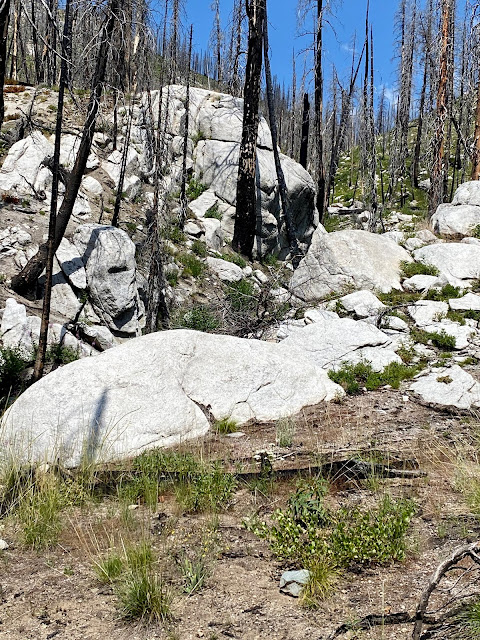 I don't mind burnt areas. In my mind it's a fresh start to the forest. Thousands of new grasses and wildflowers take hold that normally wouldn't be able to. The tall blackened trees protectively stand over the new life watching the forest re-grow itself. 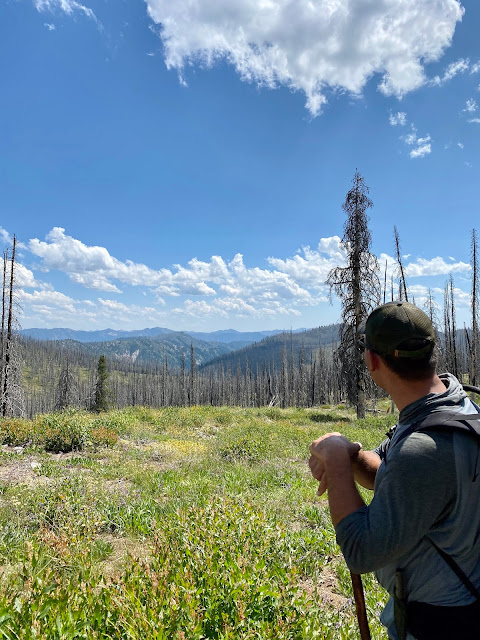 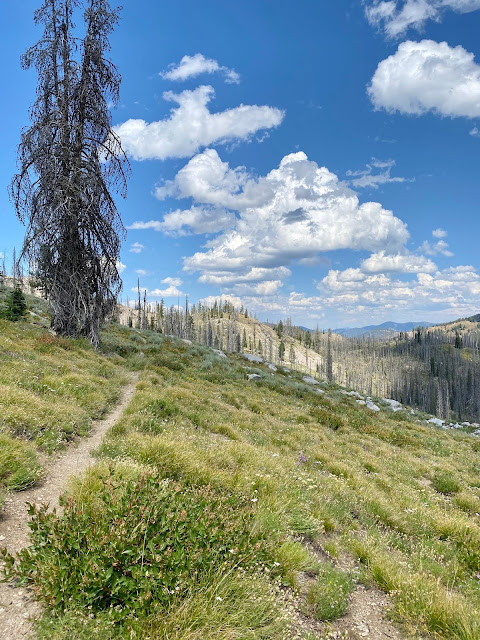 We ascended the mountain until we made it onto a ridge that overlooked some basins and distant mountains. A gorgeous sight to behold. 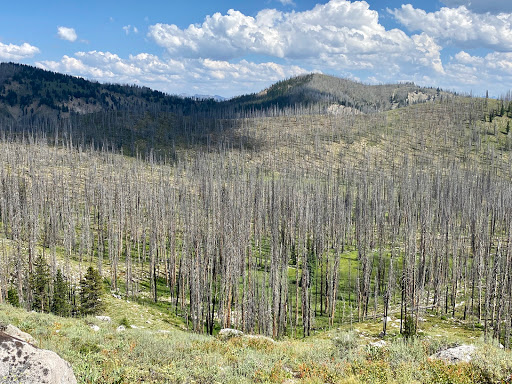 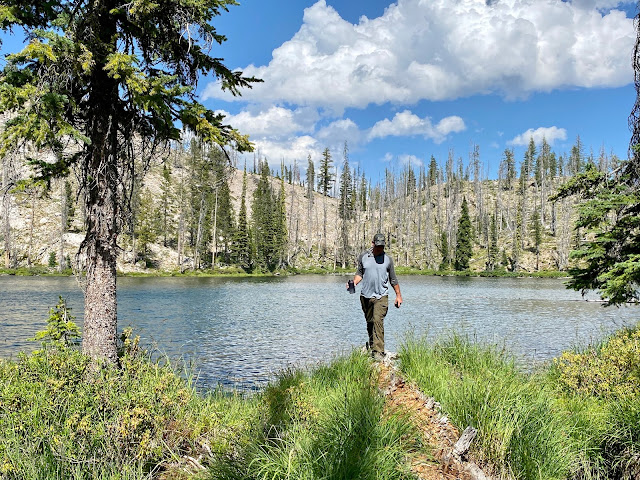 By 3 pm we arrived at the first lake. It was hard to recognize at first, but this was the famed lake I had etched in my memory. After filtering some fresh water out of the lake, I eagerly strung up my fly rod and tied on a flying ant. Sadly, no giant cutthroats could be seen cruising and no flying ant hatch was present. Nevertheless, I made some casts for old times sake. High mountain lakes can cycle like a perch population; size and quality can fluctuate through the years. The "glory years" I remembered were likely gone. After 30 minutes of fishing, we moved onto the second lake. 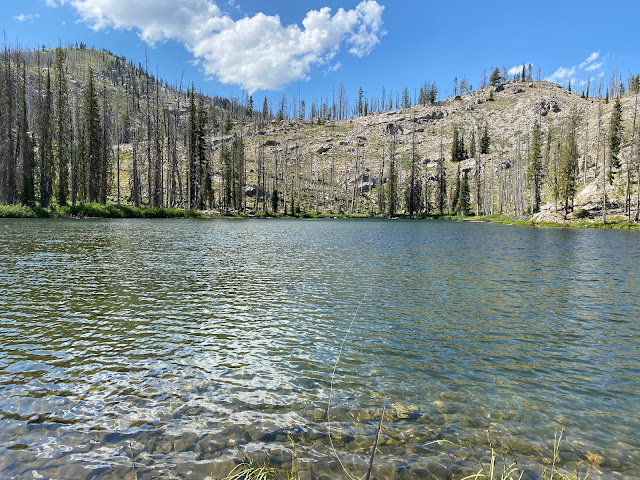 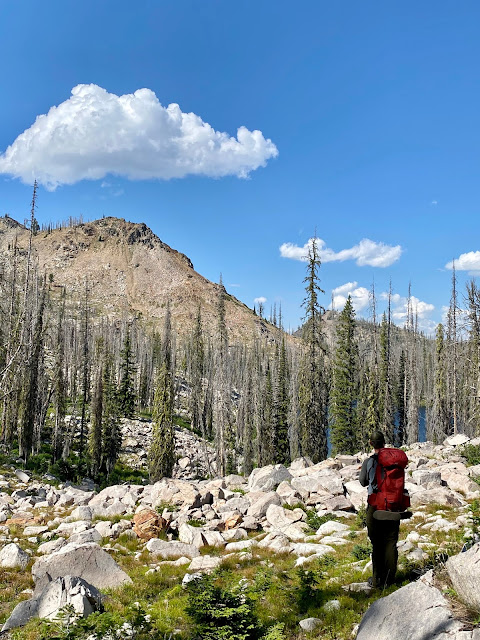 A short climb up and over the hill showed us the second lake. Larger than the first, and lined with lily pads at one end, this lake showed a little more promise than the first. This is the lake where we would camp. 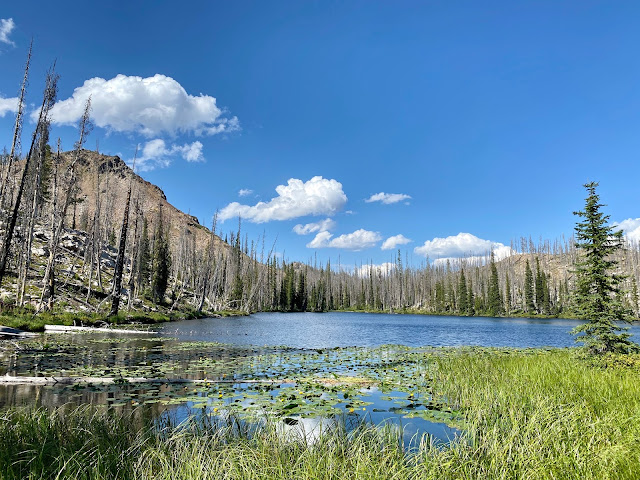 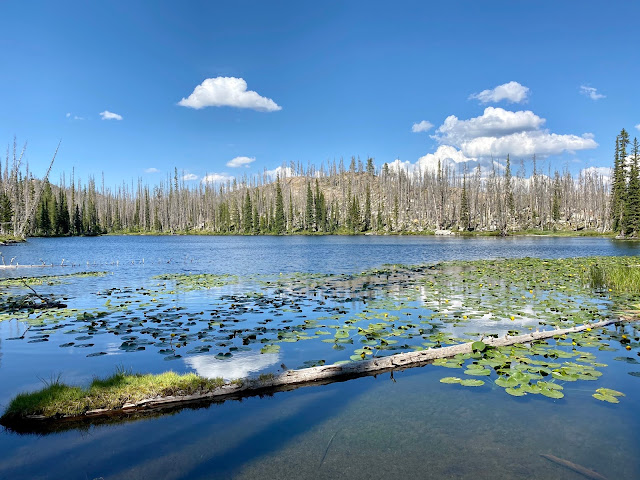 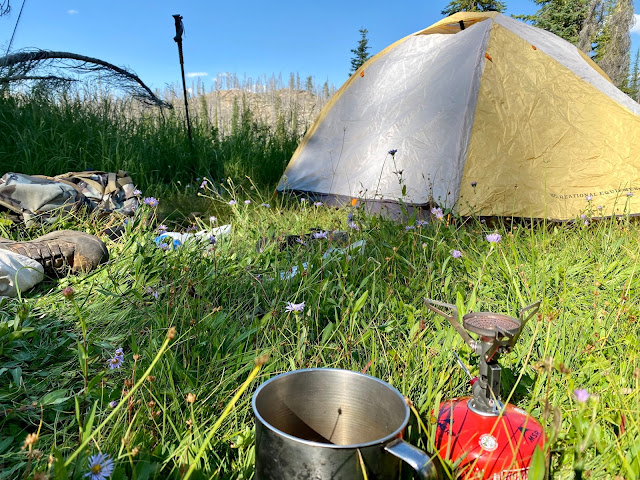 We set camp in a small meadow near the lakes edge. After camp was made, it was time to figure out what  the fishing in this lake held. Chase had chosen to bring a camera instead of a fly rod, letting me do all the fishing. The day was windy, so no surface activity could be seen. It wasn't until I nearly made it around the whole lake that I found a trout cruising. I climbed out onto a log and presented my fly. The hungry fish charged up from the depths and devoured it! 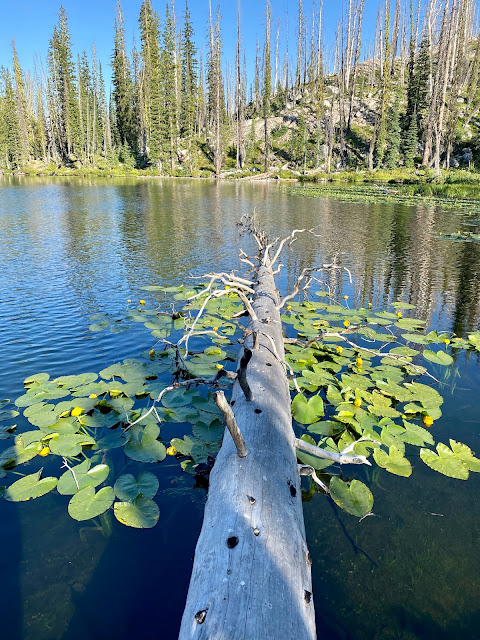 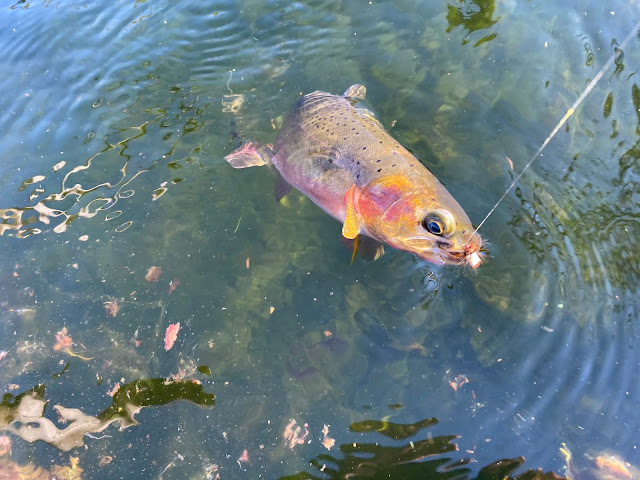 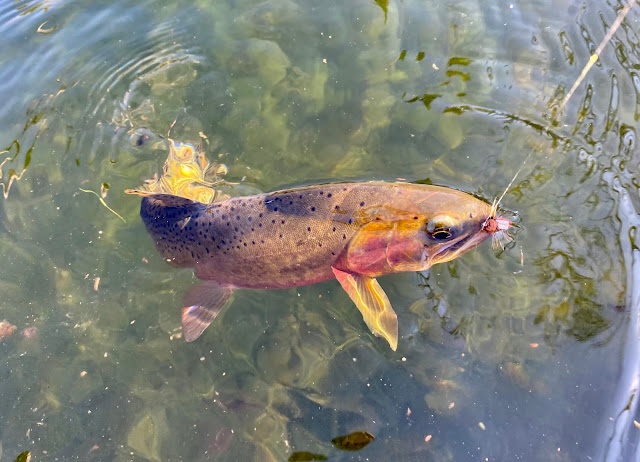 A medium-sized Westslope cutthroat trout came to hand. Hardly the 20 inch bruiser I had hoped for, but any high mountain lake trout is a special fish. I caught a couple more before it was time to eat dinner.
Chase boiled up some water and poured it into our Mountain House Beef Stroganoff.
"Well Chase, I'm curious to figure out what item I forgot to bring on this trip. It's been so long I'm sure I forgot something." I said as we ate our dinner.
"Maybe you didn't forget anything!"He replied giving me the benefit of the doubt.
"I highly doubt that." I chuckled.
After dinner, the wind began to die down and a few fish could be seen rising. The magic hour was upon us! The downside to day trips into high mountain lakes is you rarely get to stay until evening when the wind calms and the fish start rising. Sometimes you're lucky enough to catch a calm day and the fish are rising, but that's usually not the case for me. 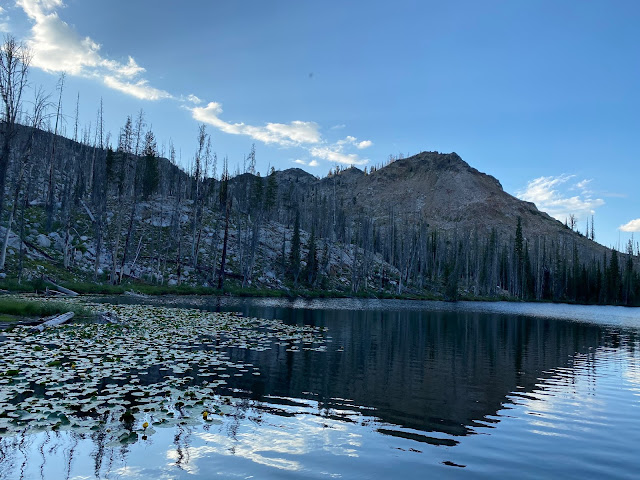 I fished until late evening, catching several more cutthroat before calling it quits. Chase read a book on the shore, soaking up the beautiful scenery of the high mountain lake.
I retired for the night to my cozy tent. The foam pad I previously used when I was in Boy Scouts was far from comfortable. My arms kept falling asleep when I tried sleeping on my side or belly; a problem I will have to remedy in the future. Luckily there are a lot better sleeping pads on the market these days.
I hadn't been asleep long when I heard a large animal come into camp. Sticks snapped and I could feel the footfalls through my thin sleeping pad. Elk? Deer? Bear? The animal was standing outside my tent. Then I heard it sniffing something. Crap! My packframe! I left my packframe outside. The same packframe I use to pack out my deer and elk. The fabric was soaked with dried blood and likely smelled delicious to a predator. The sniffing continued and I feared the worst. Determined to not loose my pack and curious what was actually out there, I began to slowly unzip my tent. I stuck my head out and met the very close eyes of a mule deer doe. It only took a few steps away, so I grabbed my camera and took a picture. The deer was hardly frightened and began to feed. 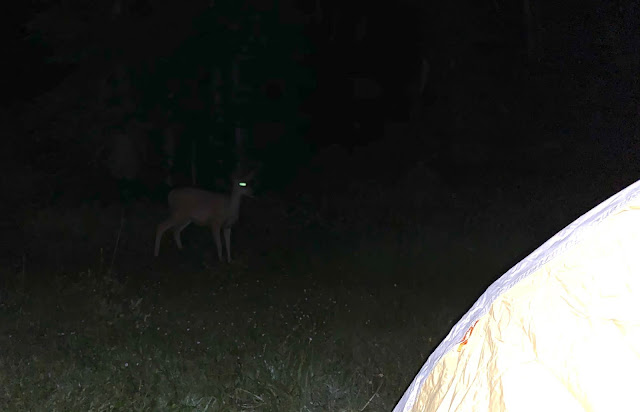 The next couple hours I could hear the deer sniffing, digging and munching on vegetation just feet from my tent.
Morning arrived and I set off with my fly rod to see what the morning catch would bring. 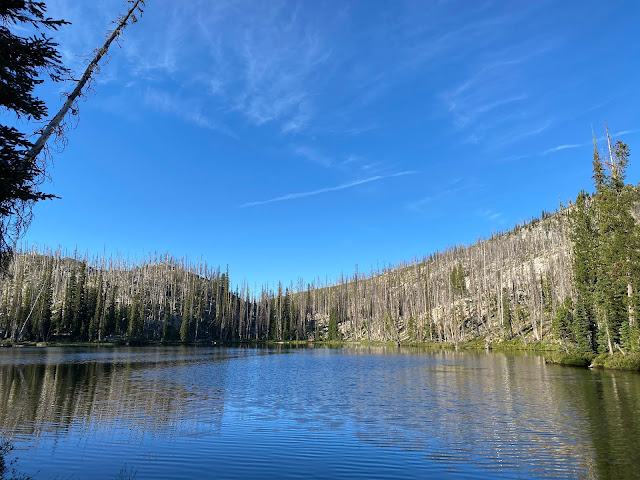 A small rainbow trout was all that came to hand. By 9 am we had camp packed up and were ready to hit some more lakes on the way out. 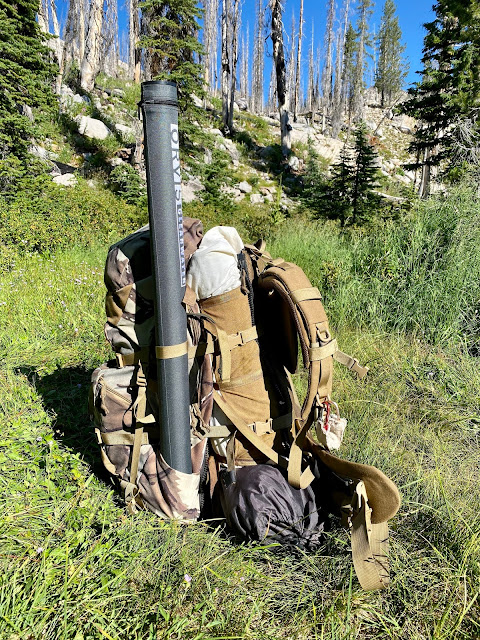 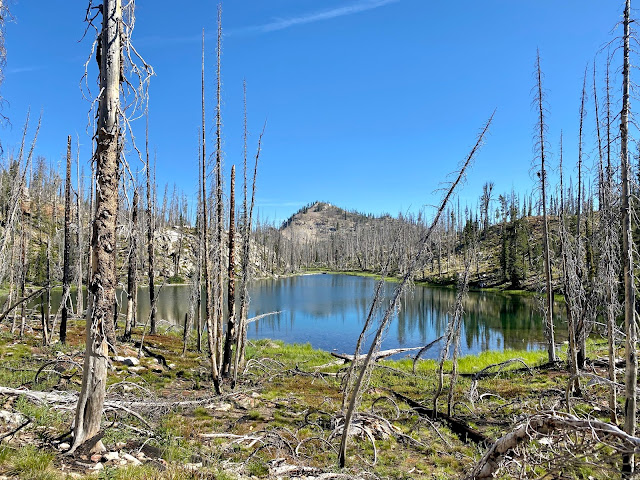 The next lake looked shallow, but fish could be seen cruising and feeding on small midges. I quickly strung up the rod again and went in pursuit of the feeding fish. It took longer than I wanted, but a rainbow trout ate my fly and came thrashing in. Satisfied, we moved on to the next lake. 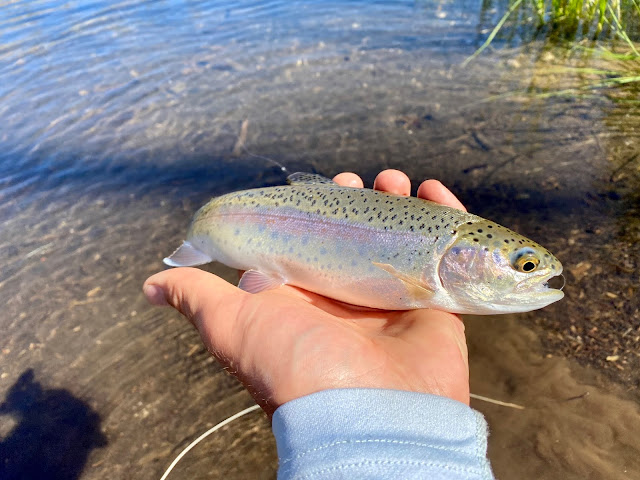 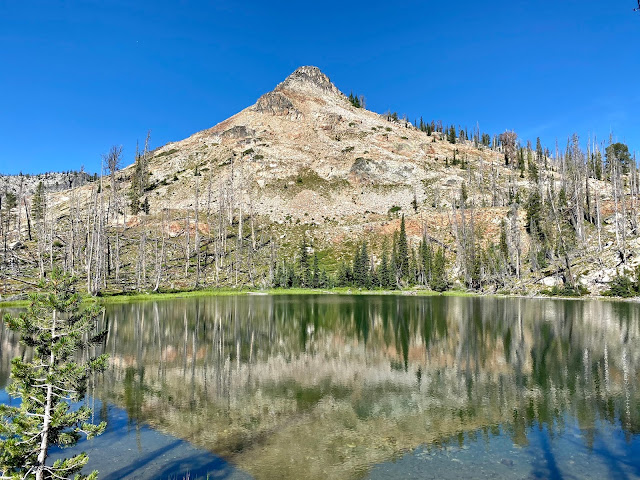 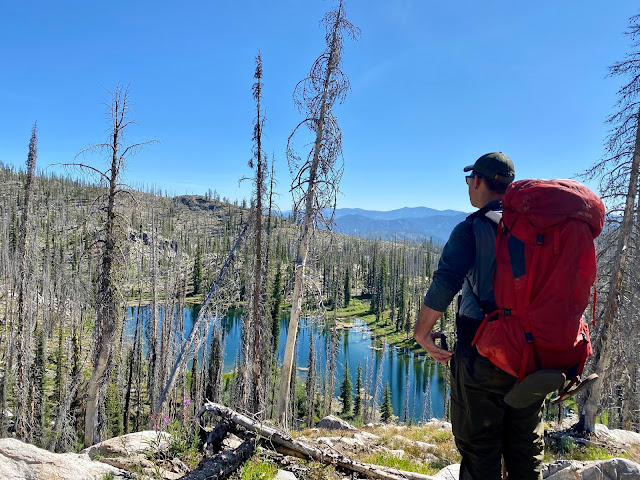 There was no obvious trail, but hiking through the burn was relatively easy. The next couple lakes were warm and possibly void of fish. The fire surely had an effect on the water temperature. Without any shade near the lake edges, and the creeks flowing in, the water would warm much faster than it would in an old forest. 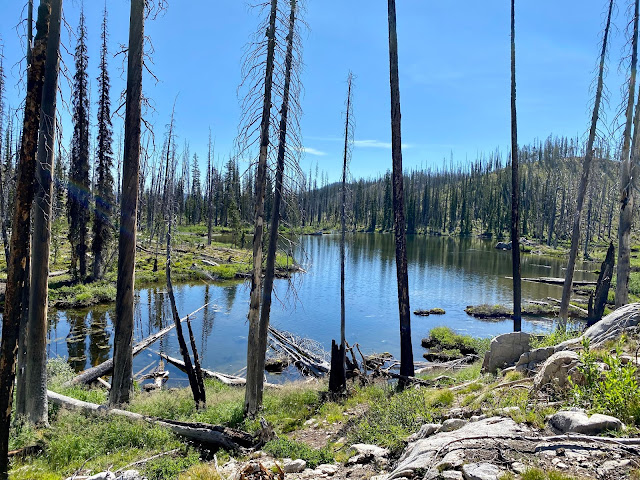 We reached the last lake near lunch time. This lake was larger and deeper, but the water still felt warm. I was determined to give it a shot though. After a quick lunch I climbed out onto a log and twitched my dry fly. A couple small fish tried eating it, but after 30 minutes I decided it was time to pack it up. 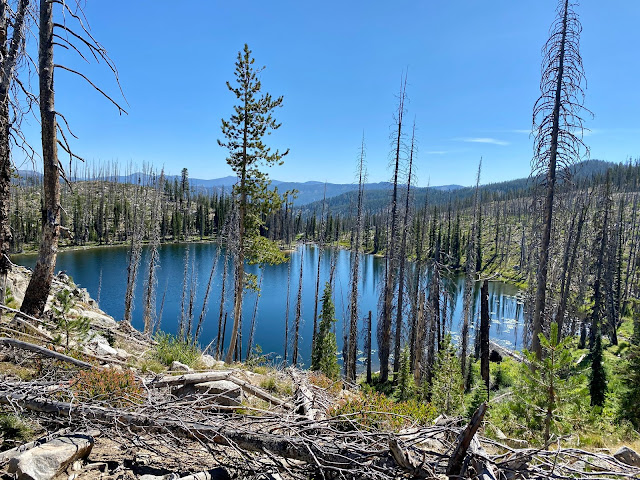 We found the established trail and began our hike back. By 5 pm we were loaded up in my truck and headed back.
"Well Chase, I guess I didn't forget anything." I said, smiling.
"See, I told you it would probably be fine." He replied.
The quick trip had been a fun one. It gave me hope and excitement for many more backpack trips to come; but on the next one, I'll have a better sleeping pad :)
Posted by Ryan's Fly Fishing and Hunting Blog at 7:20 AM