For those of you who know me, I have a hard time balancing fly fishing with hunting time. Both are deep passions of mine. That’s why when my friend, Chad, from Alaska, suggested I come up for a moose hunting trip and a fishing trip to celebrate his upcoming marriage, I couldn’t pass it up. After all, I was his best man… and what better bachelor party than on the river hunting and fishing!

Convincing my boss, John, to let me take a week off was no more difficult than normal.

"Are you ever really here, Ryan?" John would say, rolling his eyes.

After a long evening of airports and plane rides, I landed in Anchorage. Our plan was to get a few things ready and fly to Dillingham the next day. Dillingham sits at the mouth of the Nushagak River in Bristol Bay. It would take two and half hours by boat to get from Dillingham to the families cabin. Our ticket to Dillingham was for 5:30p.m. With such a late flight we were concerned we might not have enough daylight to get up to the cabin. We tried to catch an earlier flight but were unsuccessful. We landed in Dillingham at 6:30 and met up with Chad's parents, Rick and Allie, and his brother and sister, Reed and Bryn. They would also be joining us on the trip. 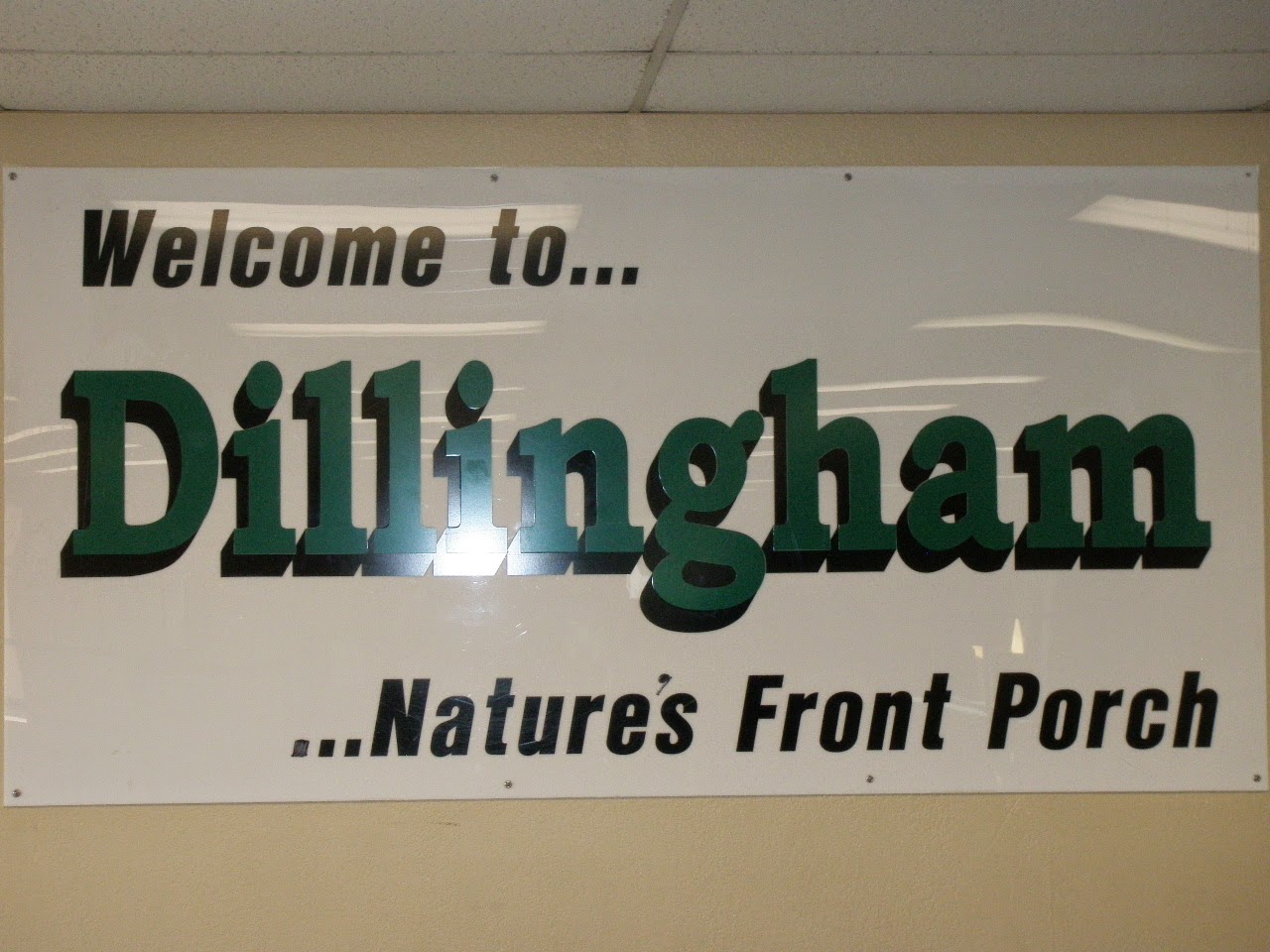 We landed in Dillingham to find nearly everything was ready for our trip upriver. We left the house and quickly launched the boats in the harbor by 7:30p.m. We were off to the mighty Nushagak River. The family's chocolate lab, Marco, was just as excited to tag along as we were.﻿
﻿ 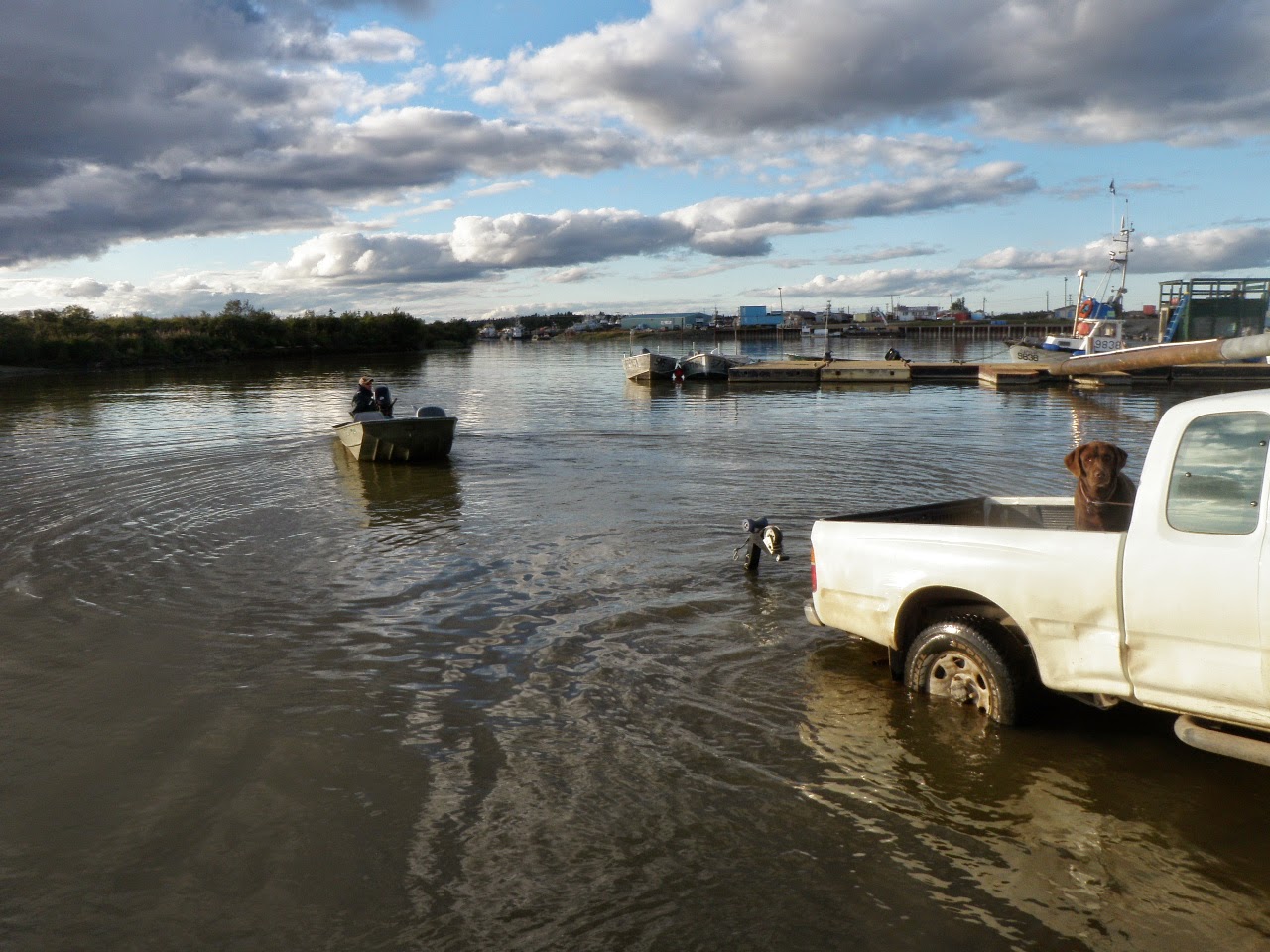 It took about an hour to get to where the shores started closing in on us and the water to take shape into a river. The sun was quickly setting and we were on a race against daylight. Further and further we went up the river. The Nushagak is heavily "braided", meaning it splits into many smaller channels. Reed was driving and taking all the "shortcuts." I was very impressed at Reed's navigational skills through all these channels, a skill I imagine took years of experience driving on this river to acquire. 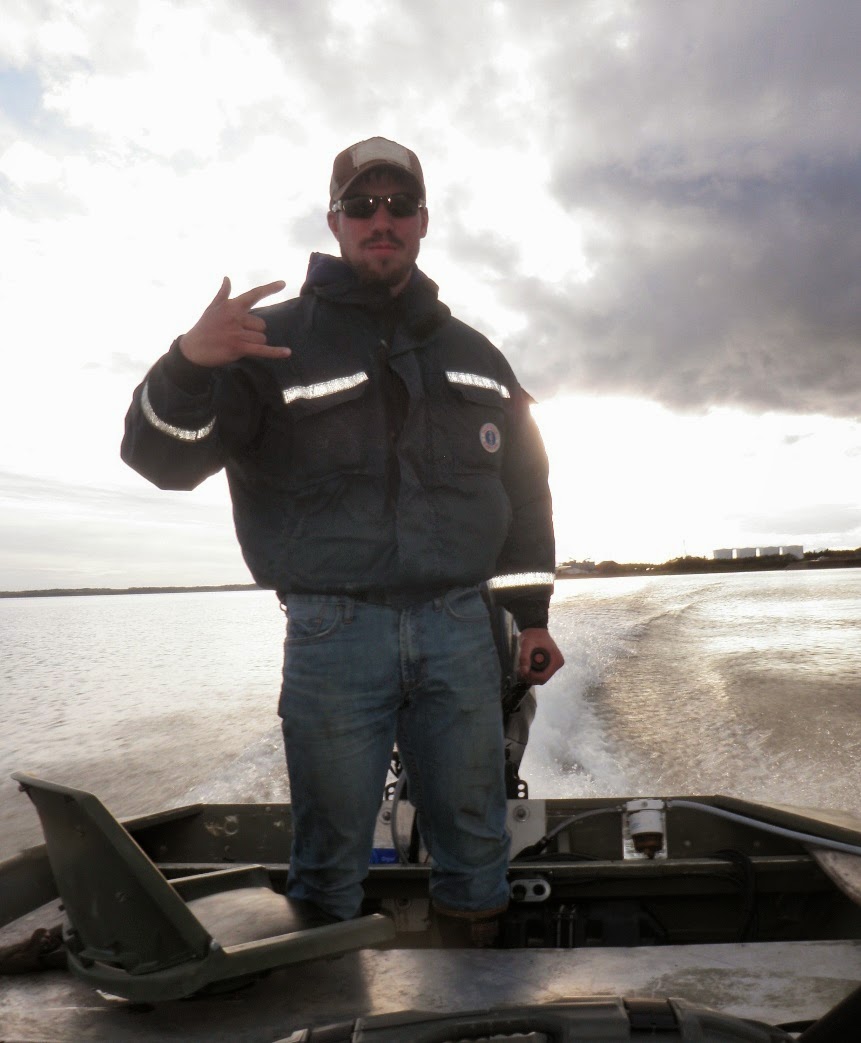 We came around a corner and spotted the first moose: a cow with two calves. We slowed down and she simply watched us as we drove by. We proceeded to see another eight or so moose in the next few miles - a good omen to the beginning of a moose hunt. 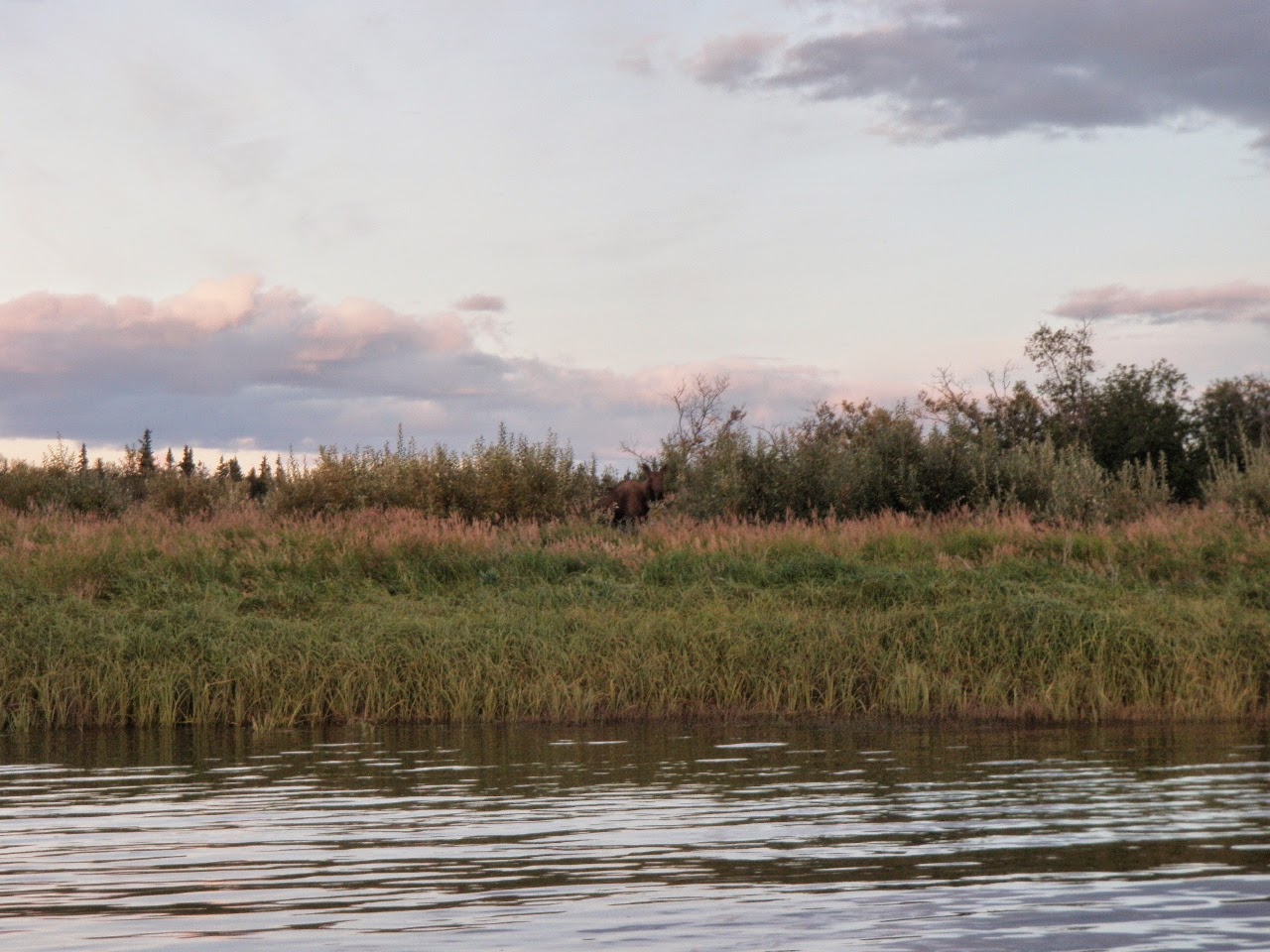 The sun was nearly set and mist began to rise from areas of the water. I could feel the temperature dropping and I was starting to get concerned. I asked Chad how much further.

"Oh probably another 15-20 minutes. We’ll definitely be cutting it close." He said. 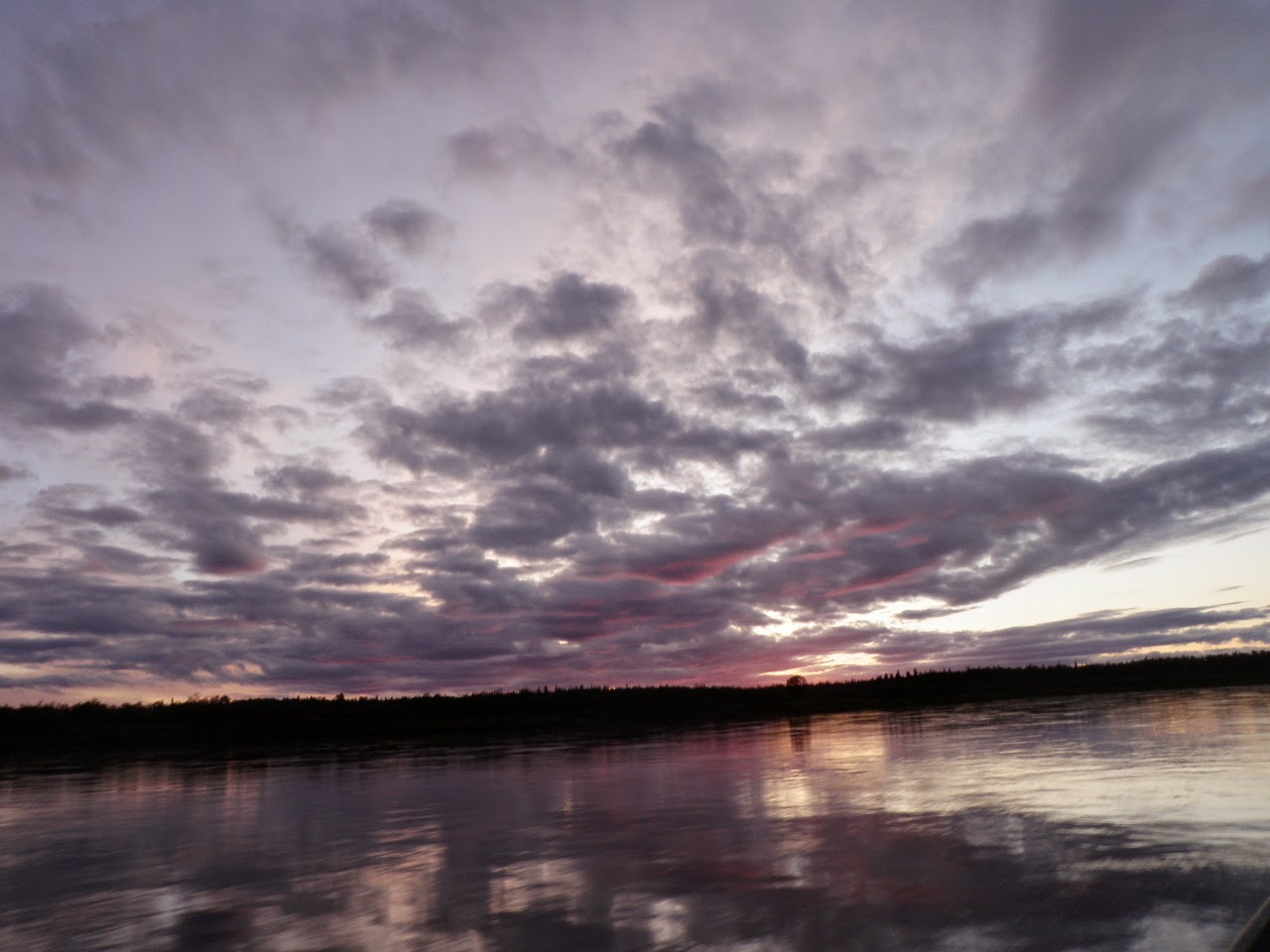 I had faith that Reed wouldn't get us lost or beach the boat on a bar so I decided to stop worrying. With just barely a sliver of light left in the sky we came around the corner to the welcoming sight of a cabin with windows aglow. After unloading the boat, a warm cup of hot chocolate hit the spot. We readied the boat for the morning's hunt and went to bed.

6:00 a.m. came quickly, but I was ready. When it comes to getting up early for hunting or fishing, I have no problem. One beep of that alarm and I spring out of bed in anticipation. I am a duck hunter after all, and those of you who have been duck hunting know it's an early sport.
By 6:45 we shoved off the shore and headed up river. Chad's family has been hunting this river for many years and knew where to find moose. Rick was driving the boat up to a series of channels and sloughs that typically hold moose. The sunrise was gorgeous, and of course, no picture could do it justice. 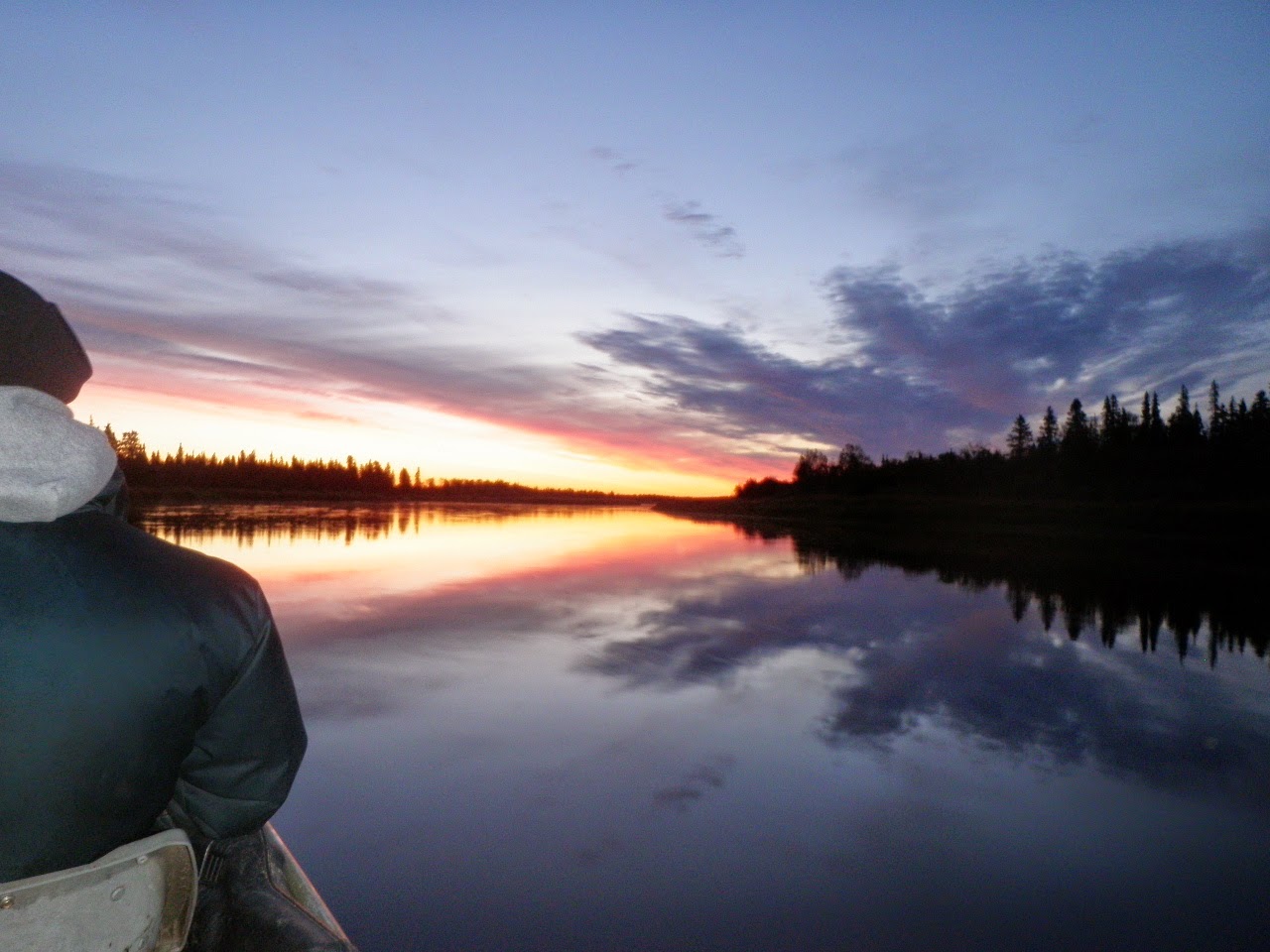 We came around the corner and spotted the first moose: a cow with a calf. We slowed to make sure there were no bulls nearby and continued up the river. Chad's family is part Aleut, the indigenous people to the Aleutian Islands of Alaska. As such, they are permitted to "subsistence" hunt the Nushagak River. This means an earlier season than the general season, and the ability to take any sized bull, as opposed to spikes or 50 + inch bulls. So essentially we were looking for any moose that had antlers.
Around another corner we spotted a cow in the river. She quickly climbed on shore and disappeared into the woods. Rick was cruising through a network of channels on his way up to the sloughs. It was exciting not knowing what was going to be around the next corner. We continued to spot cows and calves, but no bulls. Further and further upriver we went, and it is safe to say I had not the slightest clue where we were or how I would get back if something happened. 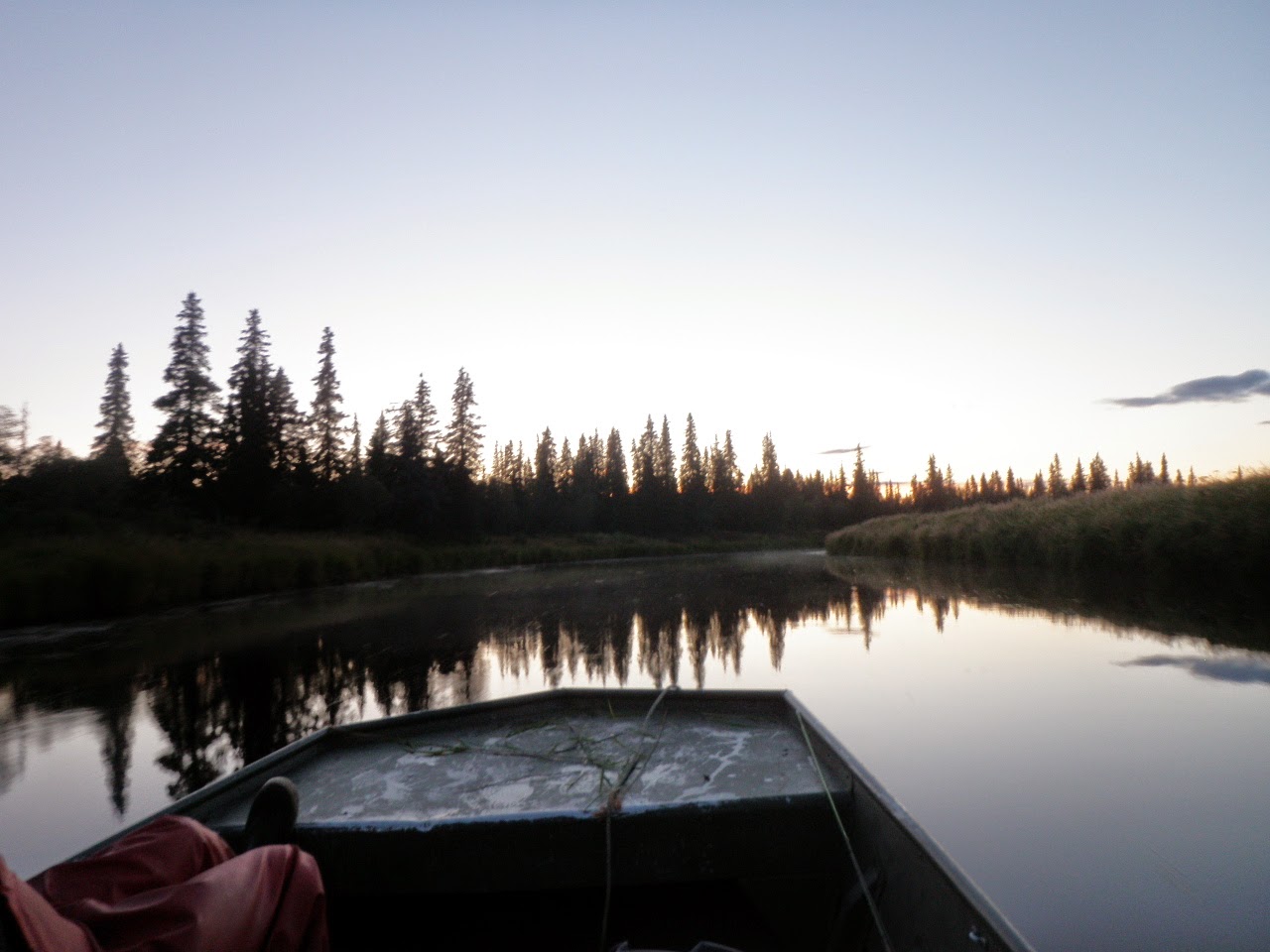 We rounded the bend of the small channel pictured, and we could see far back into a slough. Standing on both sides of the slough were two bulls. Rick quickly slowed and turned into the slough and aimed for the bank. He cut the engine and we drifted in. Chad and Reed grabbed their guns and got out of the boat. The bull on our side of the bank was looking our direction and getting nervous. With the helpful cover of a few birch and spruce trees, Chad and Reed began to slowly walk toward the moose. The bull on the other side of the slough had disappeared, and the bull on our side had faded several yards back into the trees. Reed and Chad continued to creep toward the moose, hoping to get a close and clear shot. Finally, a clear shot presented itself for Reed, and he took it. The bull took one step and collapsed. We waited a few minutes and Reed decided to approach the moose and shoot it again if it wasn't dead, not wanting it to suffer. Closer inspection revealed the big bull was already dead. It's always a nice feeling when you make a good shot and the animal doesn't suffer. We approached the large, majestic moose and stood there for a minute to admire this great animal. 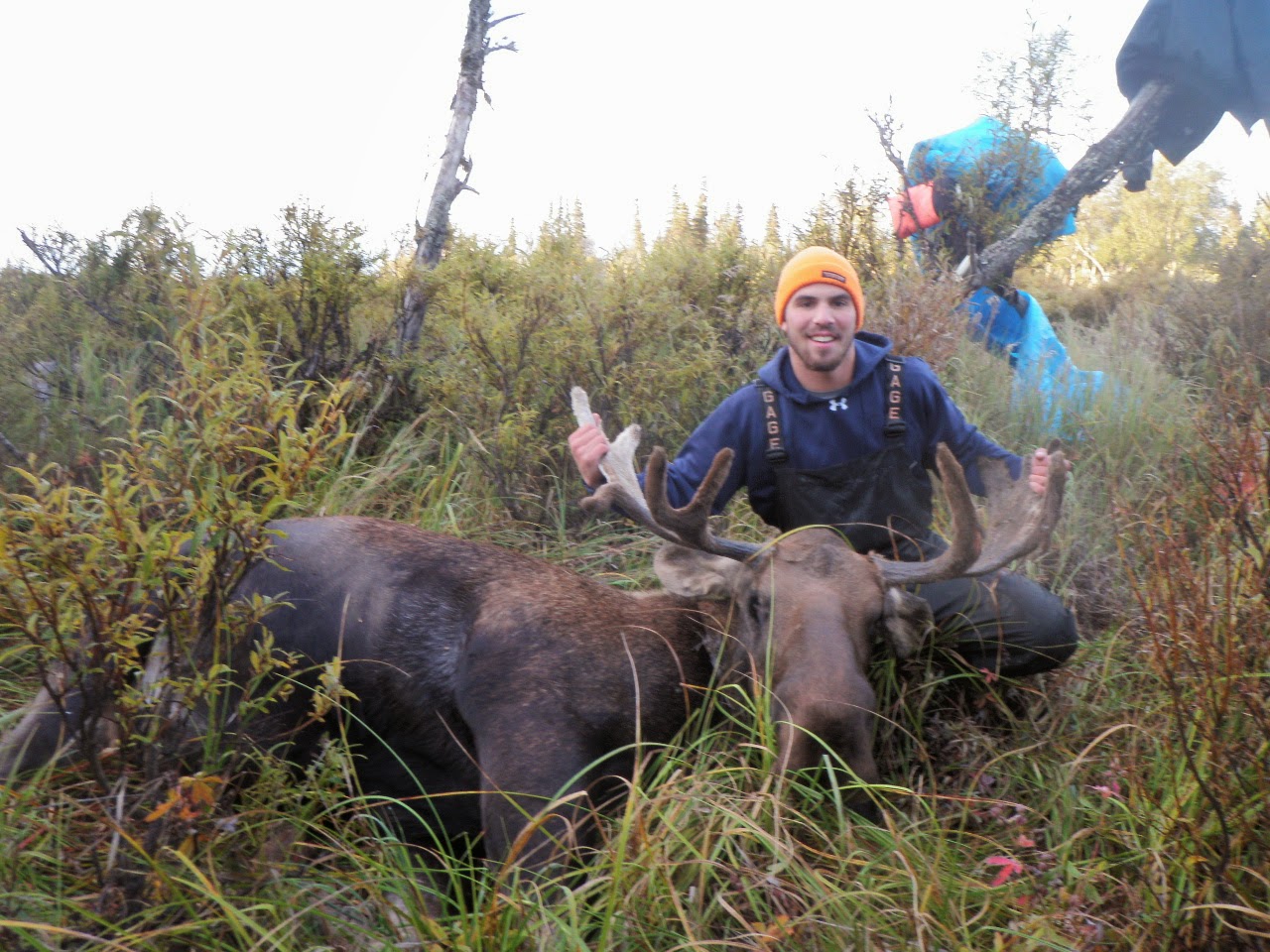 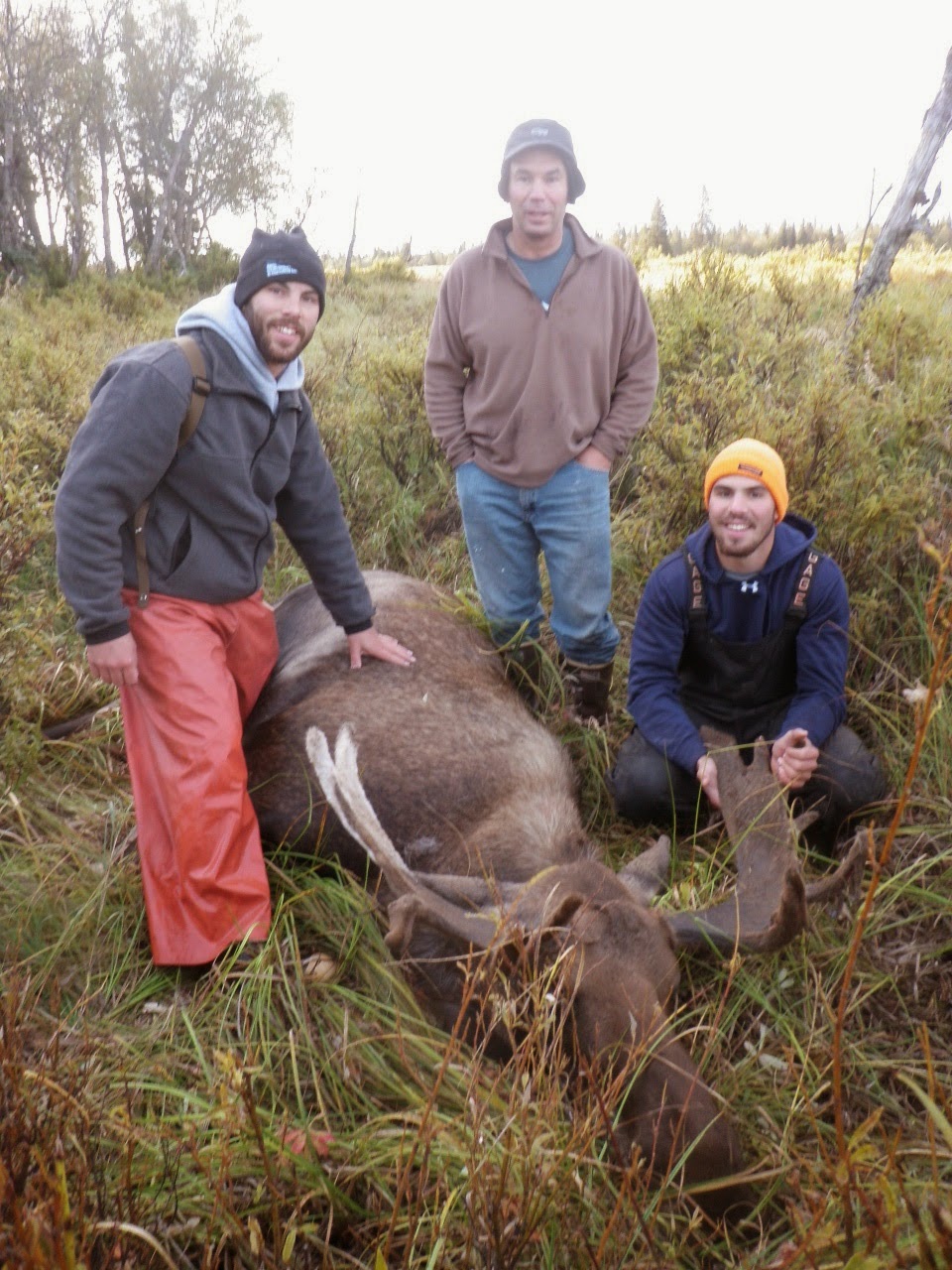 We field dressed the bull and began loading the meat into the boat. I broke out a bag full of latex gloves and offered them to the seasoned butchers around me. All I got were disappointed looks and "no thanks."
I had brought these on other big game hunts and they had been well received and appreciated. It was obvious to these guys I was not a real Alaskan.
Reed was working near the groin of the moose as I offered him some gloves.
He looked up at me and said, "ain't no shame in touching a moose's pecker!"
We all laughed and shook our heads and continued field dressing.

I hauled a hind quarter to the boat and barely made it there before I collapsed. I've put a whole dressed whitetail doe on my back and carried it several miles, and I'm sure this quarter of moose weighed more than that deer. With the boat ready and loaded we headed back to camp and hung the meat to cool. 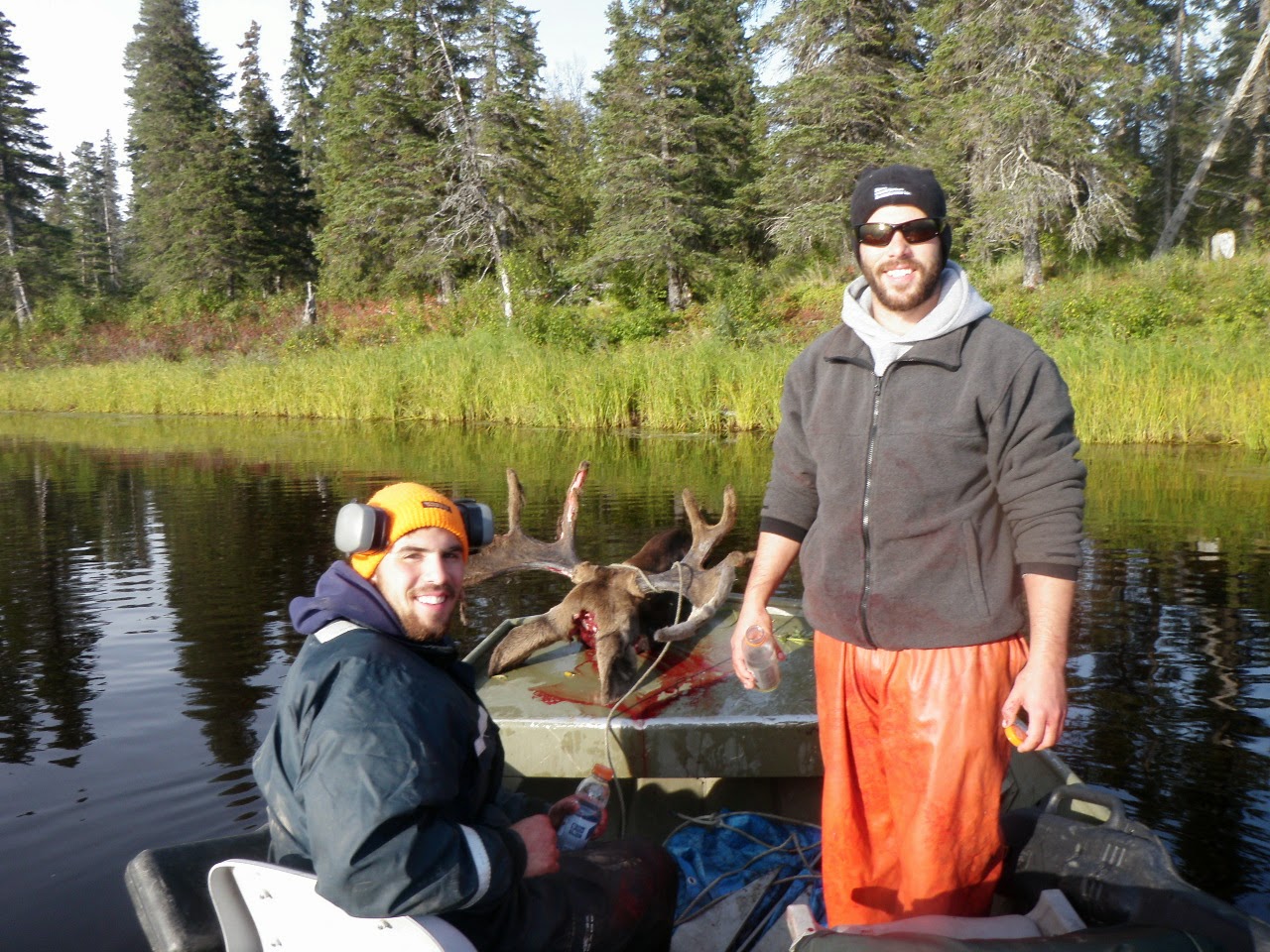 ﻿
With hands washed and a delicious breakfast in our bellies, it was time to go fishing! At least that's all that was on my mind... I'd told Chad and his brother how effective fly fishing can be for silver salmon, and I was eager to demonstrate. They were both very interested, and had fly rods and flies that I had gotten them.
"Just take us to some fish and I'll show you how to catch them on the fly rod," I told them, with perhaps a little too much confidence.
We had driven past a spot with some porpoising silvers on our way back to the cabin with the moose. So that's where we headed first. The spot we started fishing had a faster current than I was used to, and a strong downstream wind made fishing from the boat especially difficult. We ran up to the top of the run and began drifting between an island and the main shore. I spotted a submerged clump of grass and made my cast directly behind it. Strip, strip, strip, the My Little Pony fly pranced in the water beautifully, moving just like a wounded squid. I watched my fly intently as it drifted into the slack water created by the clump of grass.  Strip, strip, strip. The fly suddenly disappeared into the mouth of a silver salmon. I set the hook and the fish quickly reminded me how strong a bright Coho Salmon can be. The fish immediately ran upstream, making my drag sing. Then it decided to head straight for the boat, forcing me to strip all that line back in, only for it to turn around and take it all back out in a matter of seconds. The fish then flew out of the water spinning and twirling like a gymnast going for a gold medal in the Olympics.
"Man I love silvers!" I shouted with joy.
The fish eventually played out and I was able to take a photo of the beautiful colors on its cheek before releasing it. 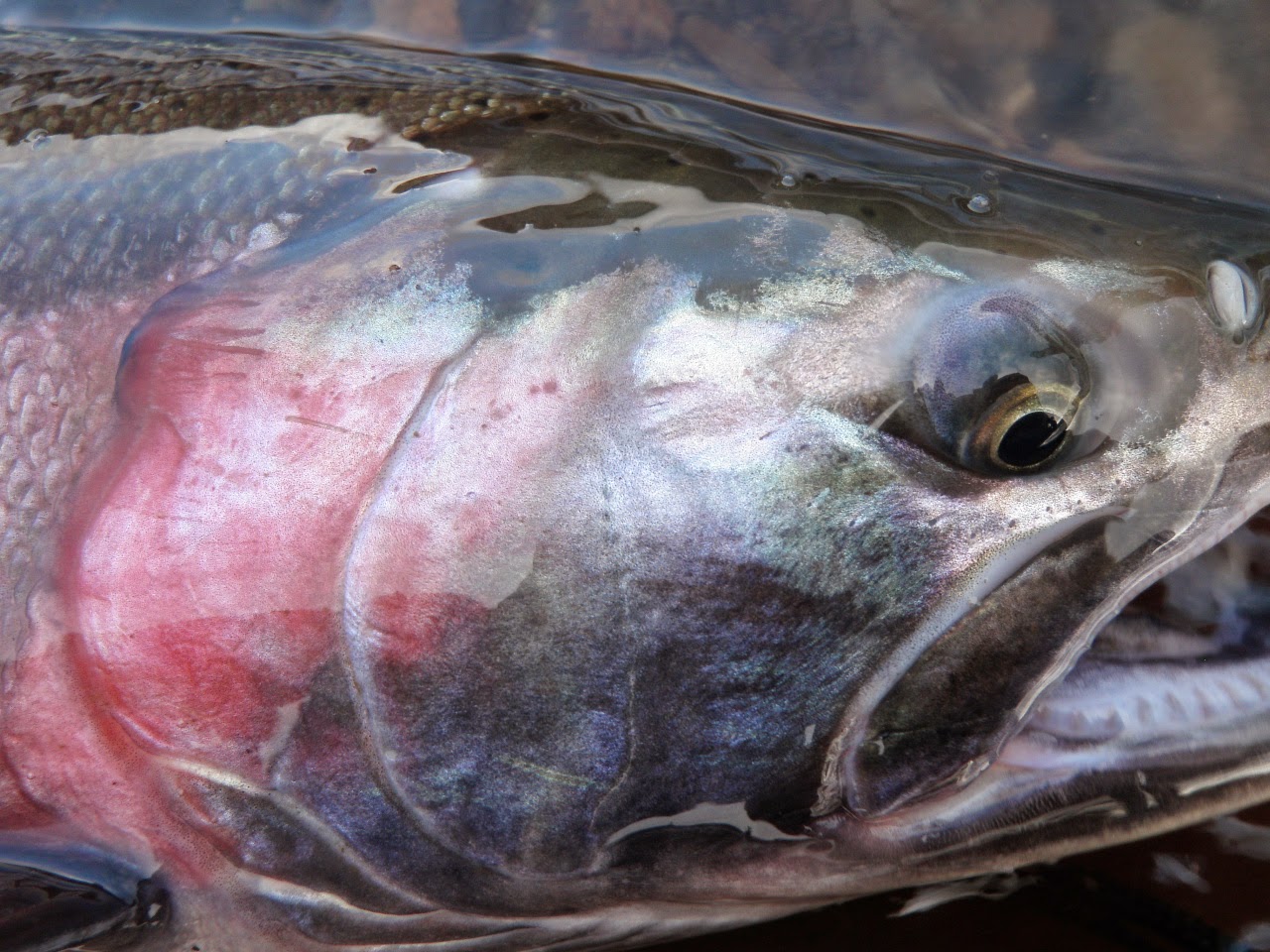 As I was releasing my fish, Reed hooked into one on a spinner. With his rod doubled over and a huge grin on his face, he yelled," Got one!"

Reed's fish flew out of the water near the boat as if it was trying to get us wet. A quick battle and he had the fish in, unhooked, and released before I could get a shot. It was obvious Reed had caught hundreds of these things before.

With mild success from the boat we decided to try fishing from the shore. I knew fly fishing would be a bit easier this way for Chad and Reed. Chad walked a bit upstream from me and began casting. I was focused on untangling my fly line in the tall bear grass when I was startled by a loud splash, marking the classic battle with a silver salmon.
"Woooooo!" Chad hollered in excitement.
Chad's fish was running all over the place and flying out of the water. Chad had his hands full with this fish and was loving every minute of it. After a long fight he was finally able to grasp the fish's tail and get a picture. 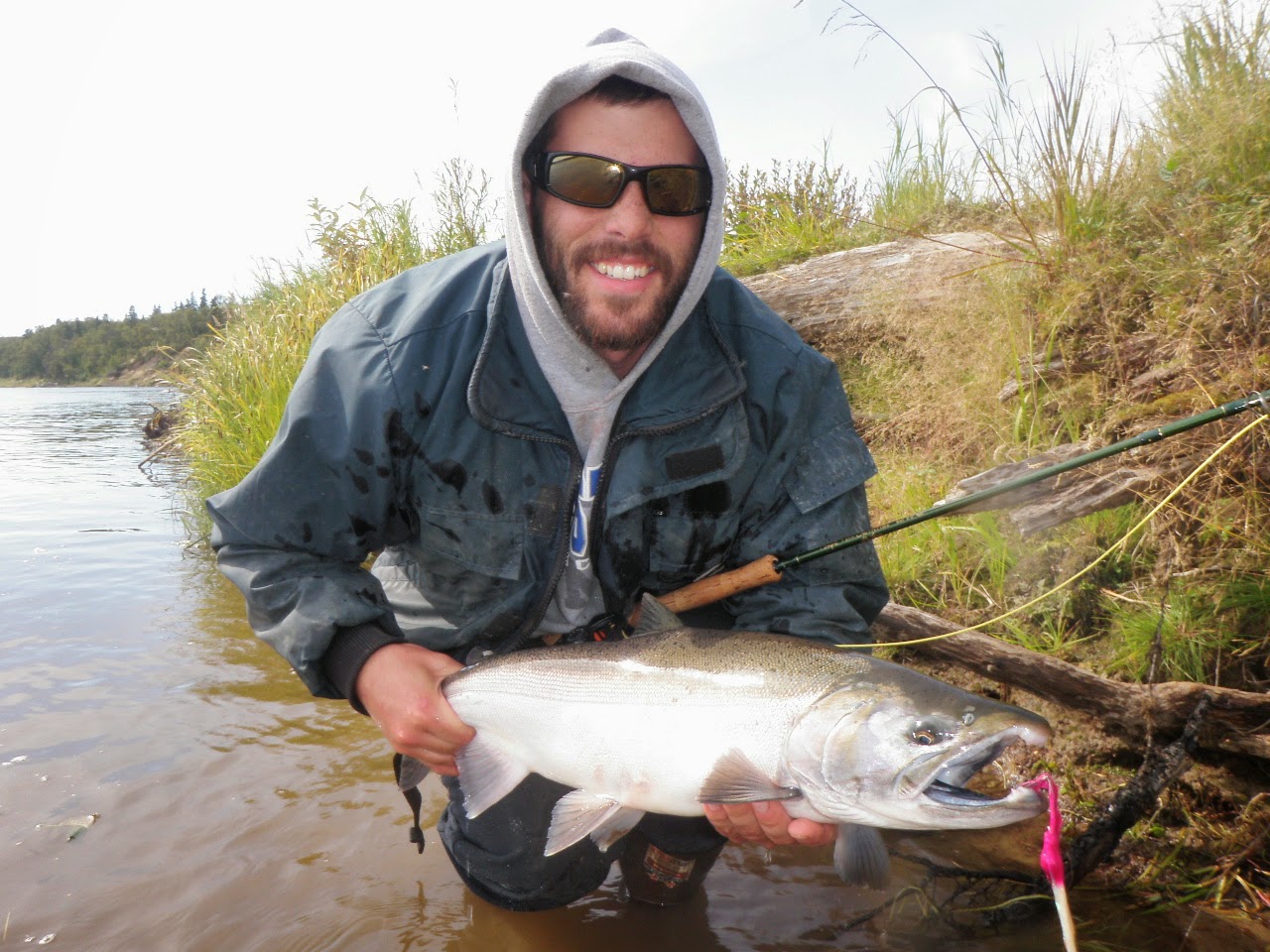 The next couple of hours were full of great silver salmon fishing. Silvers were had by all of us and even a few "doubles" took place. 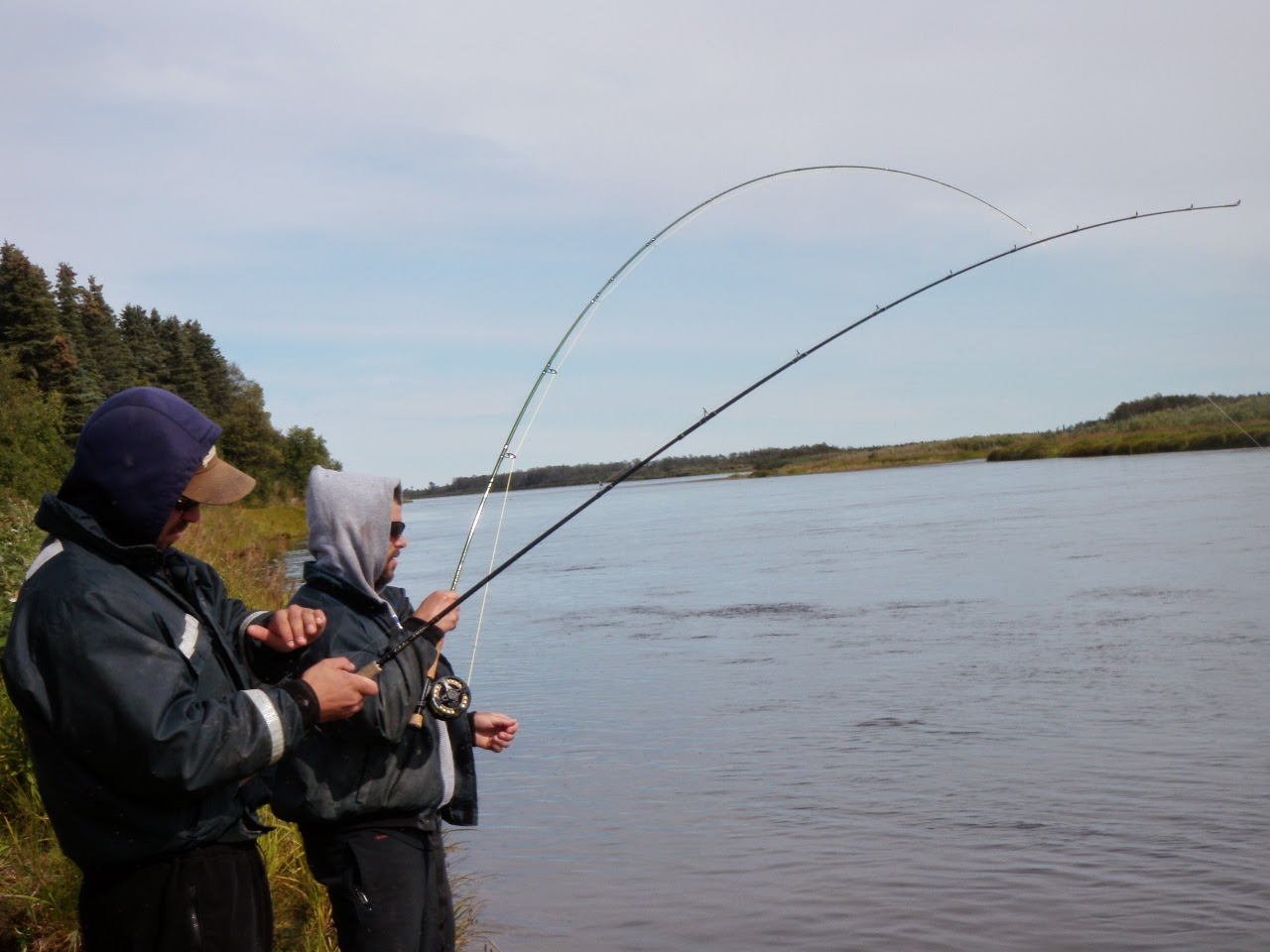 The silver action slowed a bit and we started catching Arctic Grayling. Although a beautiful fish, perhaps this was a sign it was time to head back. 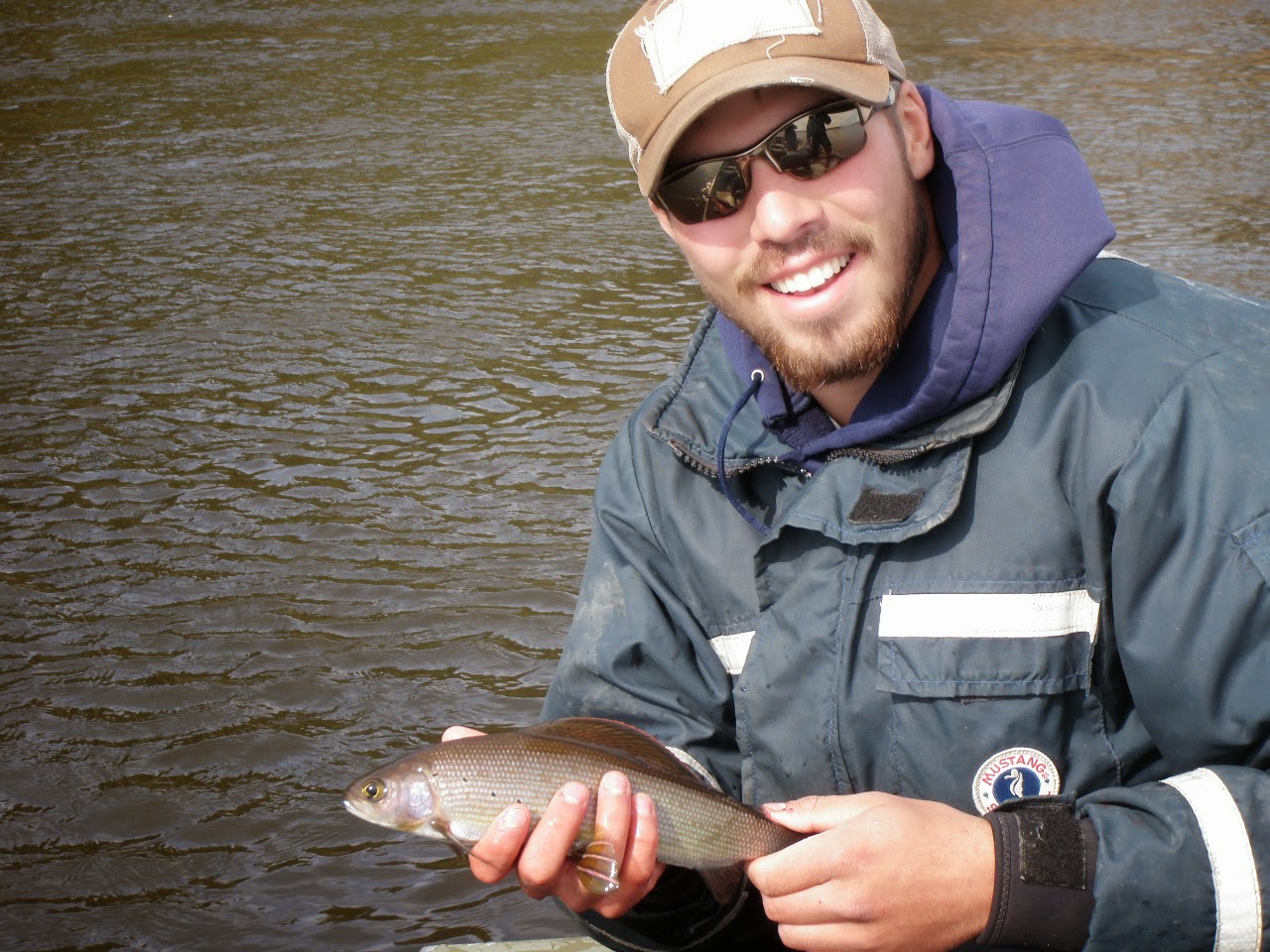 With sore arms and growling stomachs, we hopped back into the boat and headed back to the cabin. The morning had begun with a successful moose hunt and by evening we were sore from catching silvers. We went to bed early that night hoping the next day would be as bountiful as this one. This is what Alaska is all about.

Posted by Ryan's Fly Fishing and Hunting Blog at 1:02 PM