I awoke early the next morning in anticipation of what the Nushagak River would bring. As described previously, we had a fantastic day of hunting and fishing yesterday. Could we have an even better day today? Chad and his sister, Bryn, still had moose tags to fill, and I was not going to miss out on anything. So the three of us snuck out of the cabin and loaded into the 18-foot flat bottom jetboat and headed upriver to see what we could find. 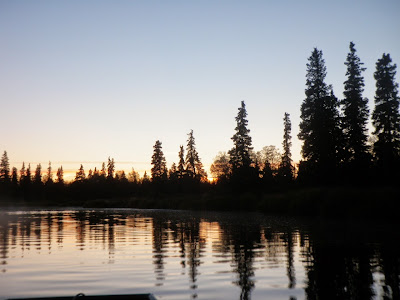 We cruised up the river and picked through the small channels and sloughs that make the Nushagak a moose factory. We starting seeing cows, some with calves, but no bulls. We continued up the river, even further past where Reed had shot the moose the day before, and ended up in small, no-name channel that seemed to have no end. This channel was deep but narrow and full of grass. Chad was constantly dodging grass clumps to avoid sucking grass into the jet pump. Finally, with all of our hands and feet frozen, Chad stopped the boat and we idled into the bank. Chad wasn't sure how much further the channel went on or where it popped out on the main river. On top of it all, we were just below half-full on our gas tank. I was glad when Chad suggested we start working our way back. 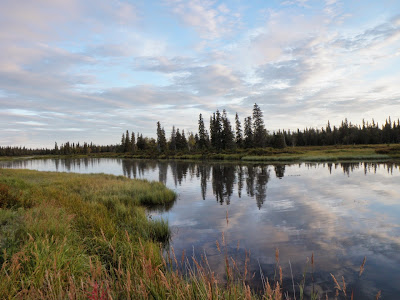 We had only made it a couple of bends back down the small channel when we spotted two moose right next to the river, and one was obviously a bull! Chad cut the engine and drifted into the bank. Both Chad and Bryn jumped out with their 30/06 rifles in hand while I grabbed the anchor and secured the boat to the bank. Chad and Bryn were already up ahead of me and were sneaking their way through the tall bear-grass to get a clear shot. I could see Chad raise his rifle and knew he saw the bull; his shot was delayed because a cow moose was directly behind it. He took a few steps closer and raised his rifle again, only to discover that his scope was foggy. Both moose ran back into the woods, clearly uncomfortable with our presence. Chad and Bryn continued in the direction the moose had gone only to find dense woods and no sign of the moose. They appeared out of the woods, and as they were walking towards me I could hear some classic sibling arguing.
“Chad, I had a clear shot but you were in front of me!”
“Well why didn't you say something?” Chad retorted.
“Oh well,” Bryn said, coming to her senses, “ I'm not sure how we would get two moose back to town with all our gear anyway.”

We drove back down the river to the cabin and told the rest of the family what had happened over a large breakfast. I, of course, already couldn't wait to do some more fishing! Chad told me we should drive downriver to where a small river comes in. He said the Silvers usually stack up there.
"Sounds awesome to me," I said.
After breakfast we hopped in the boat and cruised down the river to hammer on some fish. We had only been driving a few minutes when Reed cut the engine. "Here we are!"
That was fast, I thought to myself.
We idled into the bank and could see dark shadows scurrying all around the boat.
"This is going to be good," I said in excitement!


Silvers, or Coho Salmon, are perhaps the most aggressive of the five species of pacific salmon. They are so aggressive that they often attack flies on the surface.
“This is a perfect spot to try your pink pencil popper.” I told Chad, knowing that his topwater fly would stimulate a strike.


I went with a pink Spillers Diver, determined to get as many species of fish on this fly as possible. Reed put on an egg sucking leech while Bryn stuck with spinners.


Bryn was into a fish in no time, and was thrashing about everywhere, making all kinds of racket. 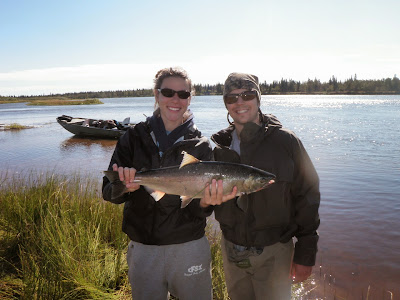 I bombed out a long cast with my 6wt paired with a Rio Outbound Short line. This line always performs well when casting a big fly.
"I didn't know fly rods could cast that far," Bryn said surprised.
I looked at my reel with probably 25 feet left of fly line and thought to myself, that really wasn't very far. If Erik were here, he would have thrown the whole line!
I began working the fly back towards me. I made it about half way back when out of nowhere a huge wake suddenly appeared in pursuit. Like Jaws after an unsuspecting surfer, the silver salmon exploded on my fly. I set the hook and was reminded how awesome topwater silver fishing could be. I had almost become jaded to silvers when I was guiding on the Kanektok River for Dave Duncan and Sons. Back then, putting two guests into 60 silvers a day was a normal occurrence, but as my reel sang, it reminded me of the rush silvers bring on a fly. I landed the fish and took a shot to show how healthy and feisty this hen fish was. 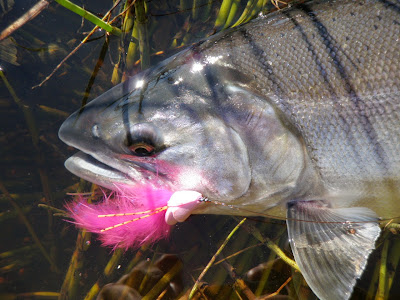 Chad walked upstream and began working a deeper pool with a pencil popper. With every pop, pop, pop, his popper would create audible splashes. Those splashes, however, were nothing compared to what came next. The silver launched out of the water and flew a foot in the air with the popper in its mouth! It hit the water with a huge splash before Chad set the hook.
"WHOOOOOOOO!” Chad yelled, ecstatic with his catch. This was his first silver on a topwater fly. 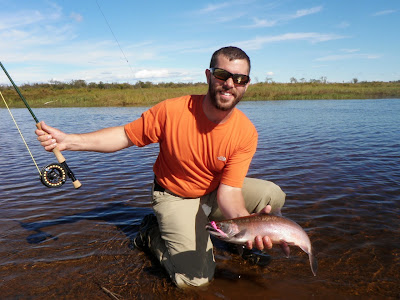 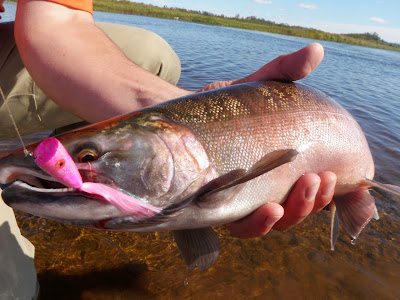 All four of us were getting into silvers left and right. Our excitement could be heard far into the woods, where I'm sure the brown bears were frowning with envy. 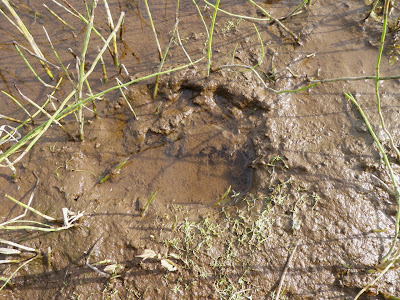 I could tell Bryn was itching to try this fly fishing stuff. I tied on an egg sucking leech and we brought her up to the deeper pool where Chad had already caught several fish on topwater.
"Topwater flies just single out the most aggressive silvers in the pool. Wait until you give them a sub surface fly." I said.
After explaining some fly casting basics and giving her a few pointers, Bryn began casting. Within minutes she was throwing the fly out to where the fish were.
"Ok now strip, pause, strip, pause, strip..." I instructed her.
Bryn began stripping the fly back in and I saw her line zip off to the left a couple feet.
"You got one!" I yelled.
She set the hook and the silver sprung into action. The fish ran up and down the pool, but Bryn wasn't going to let this one get away. She played the fish until it was tired, then hoisted up her trophy for the camera. 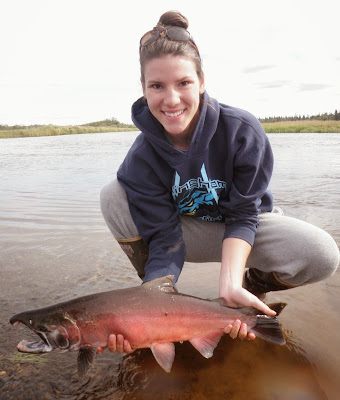 Bryn continued fly fishing that spot while I also continued working my topwater fly. There was a small island in front of us with slack water behind it. A silver porpoised six feet behind the island and revealed its position. I made my cast and began popping. Two pops were all I got before all hell broke loose. The silver exploded on my fly and immediately took off downstream. Silvers are know for their acrobatics, but sometimes they make screaming runs. This fish decided it was done with this whole idea of spawning and wanted to go back to the ocean. I was beginning to regret using my 6 wt, when the fish slowed down and I began working my line back in. Most people use an 8 wt for silvers but a heavy 6 wt is awfully fun.
﻿ 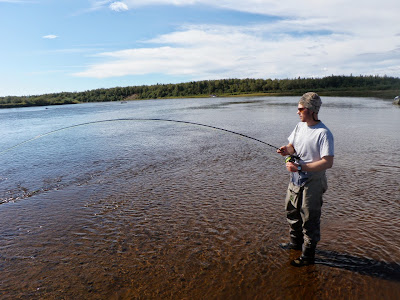 I finally worked the fish in and admired him before he took off. 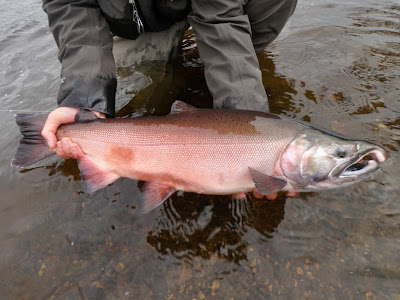 In the midst of my excitement, I hadn't realized Reed and I had been doubled up. He hollered to someone to take a picture of his fish. I ran over and took a picture of a classic male Coho salmon. 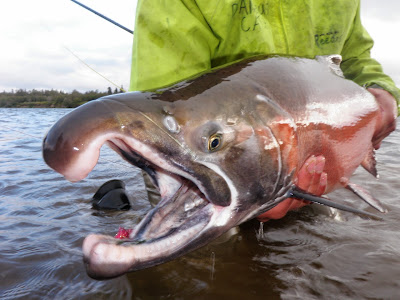 We continued to hammer the silvers all afternoon. I knew we would be coming back to this spot in the days to come. 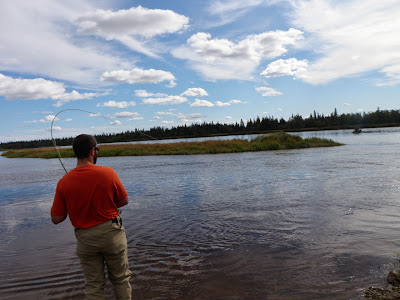 We were all having so much fun that we lost track of the time. My stomach growled and I looked at my watch. It was already 7:00 p.m., and baby back ribs had been slow cooking back at the cabin over the campfire all day. At that moment I swore I could smell them... It was time to head back to the cabin.

Despite having all caught over a dozen silvers, it wasn't easy to pull Chad, Bryn and Reed away from their spots. We headed back to the cabin and enjoyed the delicious barbequed baby back ribs while sharing our most exciting silver moments of the day. Chad mentioned doing some northern pike fishing the next day. Explosive topwater takes? Could this trip get any better?
Posted by Ryan's Fly Fishing and Hunting Blog at 8:50 AM