Goose hunting is often a fruitless endeavor. You wake up super early to set up your $2,000 worth of fancy goose decoys that required you to buy a new storage trailer to haul them. Then you spend a half hour concealing your high-tech ground blind in the middle of a bare field. You get out your $150 acrylic goose call, knowing you haven't practiced enough on it. You load your new semi-auto shotgun you had to buy just to shoot 3 1/2  inch goose loads. Then you crawl into the little frozen coffin you call a ground blind. Despite your best attempts to sound like a flock of happy little geese feeding in a field, all the geese fly by and ignore you. So why do people bother goose hunting? It's because of days like this one.

My friend Ryan lives in Caldwell near Lake Lowell. He is fortunate to have a "pit" blind in his back yard for goose hunting. A "pit" blind is basically an underground box blind that gives you complete concealment while goose hunting. Many hunters will bury a pit blind in the middle of a field so they can set up and hunt where geese would naturally land and feed. The field Ryan hunts is a mixture of alfalfa and grass. Geese like this kind of forage, but not nearly as much as corn or wheat. This explains why our success hunting here is usually mixed. Ryan said the geese had been flying good lately and told me it was time to hunt. I brought Rick, my future father in law, which took some convincing after last years unsuccessful goose hunt there.
We normally drive a truck and a horse trailer out to the field to set up the decoys. However, due to the warm and rainy weather we had been having, the field was muddy. We'd have to do this redneck style! 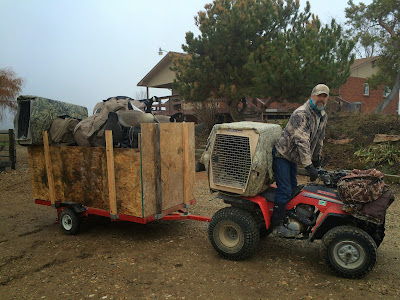 We set up our spread of 6 dozen decoys and crawled into the pit to wait. The calm foggy morning gave me optimism. 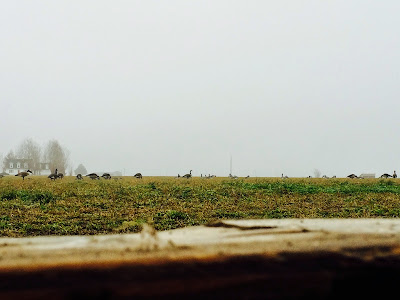 It wasn't long before we heard the distinctive sound of a flock of geese in the distance. They sounded close, but with the fog we still couldn't see them. Ryan and I began to call back to them, doing our best to tell them they should come hang out with us. Apparently we sounded ok, because their honks grew louder and directly from the South, 4 geese appeared with their wings already locked. They descended down from the fog towards our spread, a sight that will always excite me. Ryan and I continued to call as they made a circle around the spread, before picking their landing zone. The geese began back-peddling in front of blind. I was so excited I could hardly stand it. That's when Ryan said the best words in waterfowl hunting. "LETS TAKE 'EM!"

We all shoved the wooden cover boards back, stood up and began shooting. Two of the 4 geese fell. We let the dogs out of their crates to retrieve the birds. It's a good thing we had Gauge, Ryan's oldest yellow lab, to chase down 1 of the birds. Gauge is a seasoned goose hunting dog and rarely lets a knocked down bird get away. 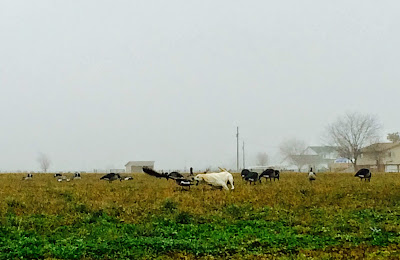 Gauge and Grace (Ryan's other lab) brought us the geese just in time for the next group of birds. The dogs crawled back into their crates and we shut the doors. We could hear another flock of geese coming from the lake. We began calling and it wasn't long before they appeared out of the fog.
"Here they come, Rick. Get ready." I said, in between calling.
The 8 geese circled around the decoys before back-peddling right in front of the blind.
"TAKE 'EM!" Ryan shouted.
We jumped up and began shooting. This time, 5 of the geese fell. We hopped out of blind to help the dogs retrieve the birds. 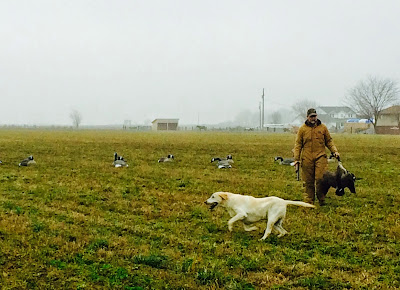 We dropped back into the pit and readied ourselves for another group of geese.
"Dang Rick, you must be good luck. Things are going great today." Ryan said from the far end of the pit.
"And it's only 9 o'clock. The bulk of geese haven't even left the lake yet." I added.

A few minutes later we heard another flock. Ryan and I started calling. Once again, another flock of geese appeared out of the fog with interest in our decoys. The 5 geese circled several times before deciding it was safe to land. On their last pass, they swung over the top of the pit.
"Let's TAKE 'EM!" Ryan shouted.
We jumped up and started shooting. Our aim must have been off because only 1 fell from the sky.
"Dang. They were a little higher than I thought." I said in frustration, trying to justify my poor shooting.
"Yeah, should have waited for a better shot." Ryan said as he reloaded his gun. 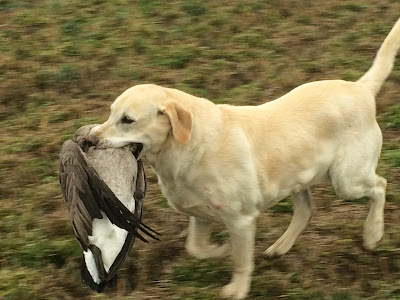 Gauge held up his end of the bargain by retrieving the single goose.

We could now hear multiple groups of geese around us. Ryan and I made our best attempts to call and persuade them, but none were falling for it. A couple groups of geese circled high to investigate but kept going.
"This is a little more like how it usually is, Rick." I said, as another group ignored us.
"You mean like that one day you took me last year?" Rick replied.
"Ha, yeah." I chuckled.
Another flock of geese appeared from the South. We slid our covers over our blind openings and Ryan and I started calling. The 4 geese locked their wings and began descending. 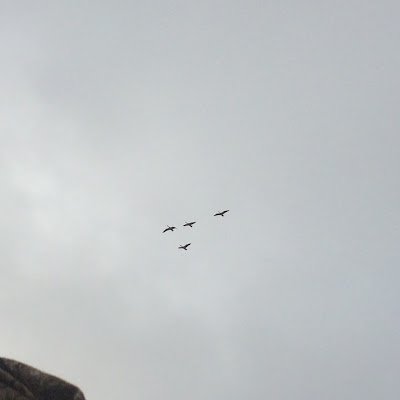 ﻿
As perfect as it gets, the 4 geese dropped right into the opening in front of the blind. Ryan called the shot and we dropped 3 of them. In Idaho, you can shoot 4 geese per person, per day. We only needed 1 more goose and it was only 10 AM.
"Alright Rick, the last one is yours. We'll back you up." Ryan said.
"O-kay. If you insist." Rick said with a smile.

The morning flight of geese had now started. Flock after flock left Lake Lowell and made their way in our direction. Many groups ignored us, while some circled once for a look before continuing to the North. This went on for a half hour or so. I began to wonder if we'd convince any more birds to land.

Four geese magically appeared from the South and we began calling. With locked wings and scanning eyes, the 4 geese approached the decoys. They made one circle before back-peddling into the decoys.
"Ok Rick, GET HIM!"
We all stood up and Rick made his shot. BOOM! The last goose to his limit fell.
"WOOOO! And we're done. Good job Rick." I said giving him a high five.
"Thanks. What a goose hunt." Rick replied, still surprised at how the morning had turned out.
"I had a good feeling about this morning." Ryan chimed in.
We gathered the birds and arranged them for a picture. 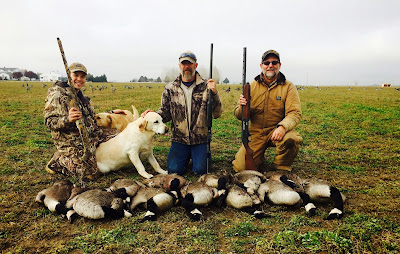 Gauge and Grace looked proudly over their birds.﻿ 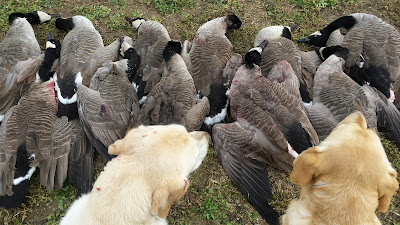 We packed up all the decoys and our gear and headed back to Ryan's house. As a fly tyer, I have an extra interest in geese. They have the absolute best CDC feathers of all the waterfowl. The CDC feathers are the small feathers located around a birds preen or oil gland. There are about 20 good feathers there and they are easy to pluck. If you're a goose hunter and aren't taking 20 seconds of your time to grab these little feathers, you're breaking my heart! Wondering what to do with these feathers even if you aren't a fly tyer? Please bring them into Anglers Fly Shop in Boise! You will make our day! We might even disclose some of our secret fishing spots to you... 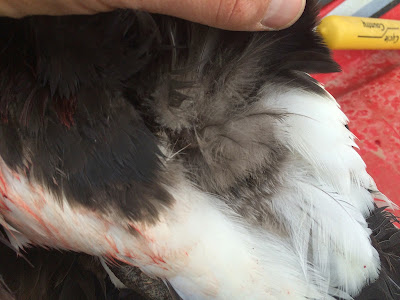 Another premium feather you can't get anywhere else are the primary wing feathers. They have the best biots for tying small dry flies. ﻿ 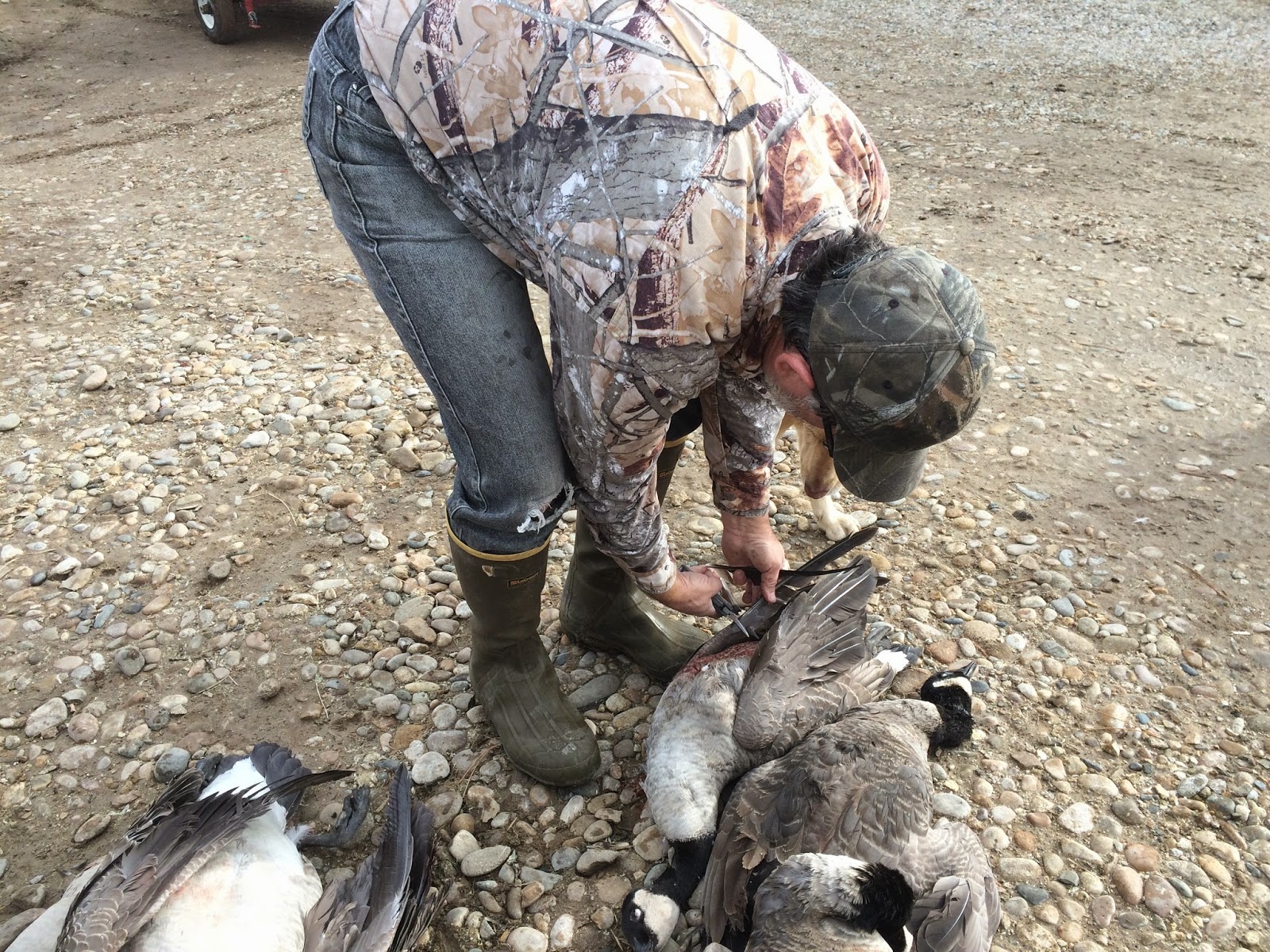 We loaded our 8 geese and gear into my truck and headed back to Boise. It had been an amazing hunt. The conditions had been just right and we really lucked out. All I could think about was the next wild goose chase!


Posted by Ryan's Fly Fishing and Hunting Blog at 10:17 PM