You snooze, you lose

I arrived at the meeting place 10 minutes late. However, Erik Moncada was nowhere to be seen. Maybe he's running late? I thought as I wadered up. The sun was beginning to rise and I was looking forward to it's approaching warmth. These early morning fishing trips before work can be cold, but productive. With my waders on and rod rigged, I looked at my watch. It was now 20 minutes past our original meeting time. I wonder if he forgot? I sent a text message to Erik telling him I was here and that I was going to head down to the river.

I made my way down to the water and began casting to the places I have caught steelhead in the weeks past. The river was noisy with the honks and quacks of too many fearless feathered fowl. Whenever I'm on the Boise River in the winter time, I dream of what it would be like to hunt such places. Let's see; I'd build a blind over there and set my decoys here. The ducks would try to land there. BOOM! BOOM! Two greenheads that backpedalled into the shallow gravel cove to my right, fell to my minds deadly shotgun. My blissful daydream was interrupted by the tone of a text message. I retrieved my phone and read Erik's message.
"I completely forgot."
Of course you did. I'm not replying, you lazy bum. I'm fishing! I snubbed my cold nose and put my phone back into my pocket. My warm bed did sound nice...

I decided to head upstream and try a few places I had not fished yet this fall. I crossed a channel and began walking up a gravel bar when movement caught my eye in the bushes. A young antlered mule deer stood up several yards away. I quickly took out my camera to take a picture of it. The deer was frozen, convinced I couldn't see it if it didn't move. We had a stare-down for a while before I eventually won. I fished a bit upstream and decided, with my limited time, to focus my efforts where I knew there were likely steelhead. I headed back downstream as the sun started to shine. I was looking forward to some sunshine. As I came around the corner I made an awful discovery. Fog was rolling in, thick fog. 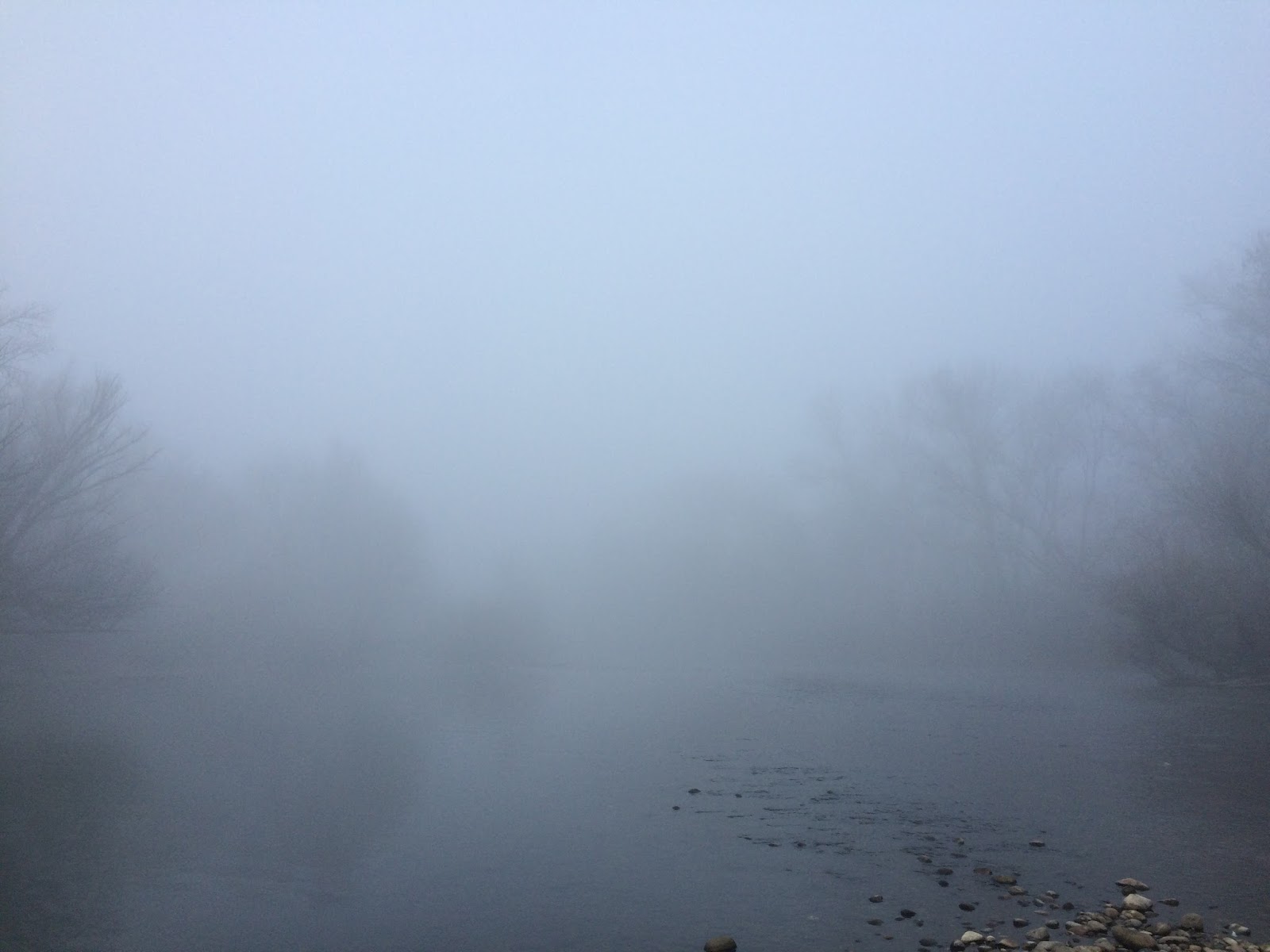 The fog quickly consumed the river and seemed to quiet everything, even the geese. The clock was ticking and I'd have to leave for work soon. I began casting with intensity. My flies slowly drifted through the calm tail-out of a deep run. Every other cast I felt the resistance of dead leaves and the soft bottom. I knew my flies were right where they needed to be. I took a few steps downstream and threw a short cast that would swing next to an undercut bank. With my sensitive Helios 2 rod, I swore I could feel if a fish even sniffed my fly. My line stopped and I gave a big strip. I felt resistance and lifted the rod. Time stalled for a second as the heavy object on the end of my line slowly shook its head and turned into a steelhead. Every steelhead angler knows the feeling. That magical moment when you set the hook and you feel that slow distinctive head shake that only a steelhead will give you. 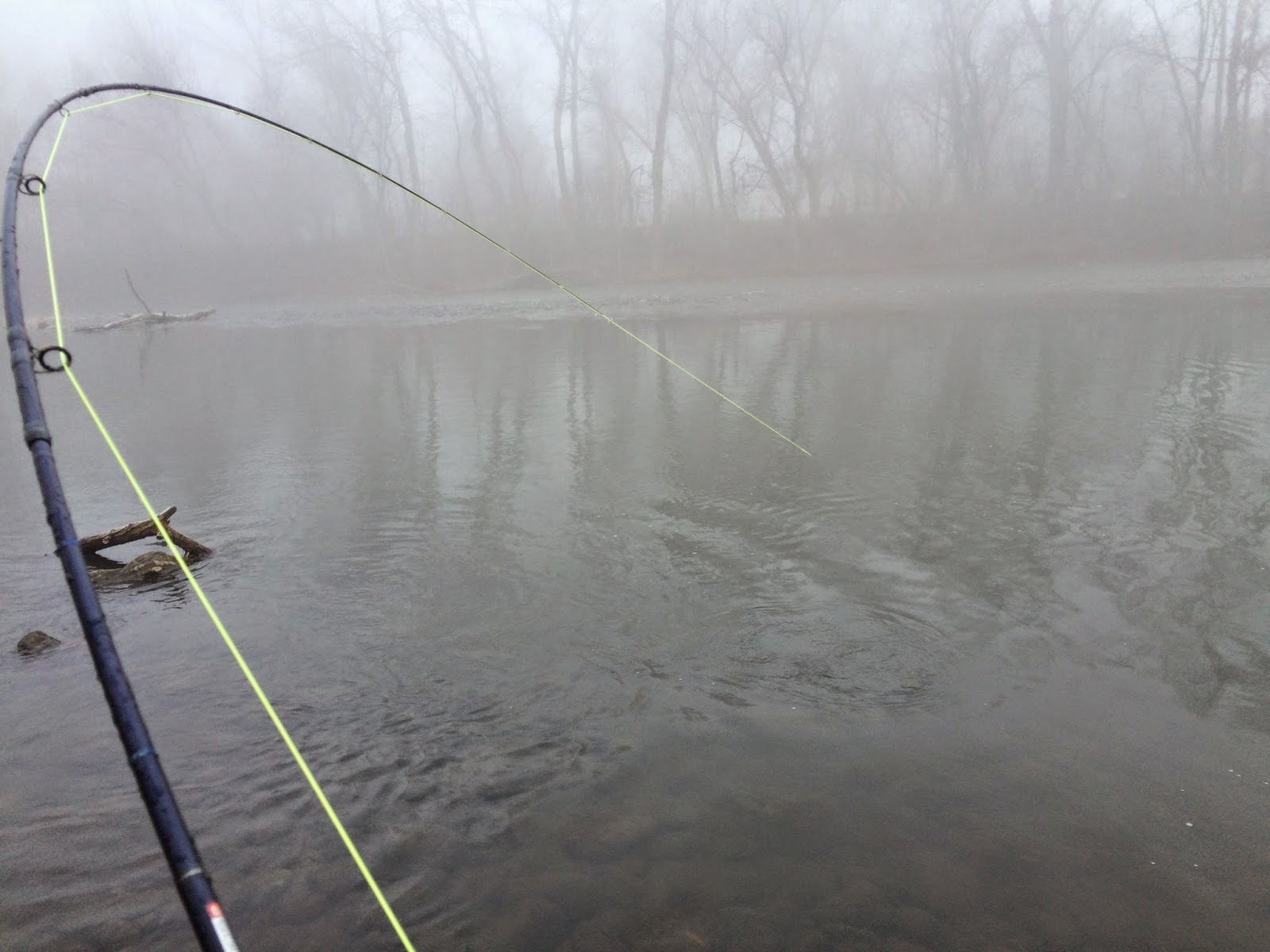 The fish took off downstream and nearly disappeared into the dense fog as it thrashed on the surface. I made my way downstream to a more suitable landing spot. The fish ran back upstream and tried to tangle me in some willow roots. The fish had somehow managed to wrap itself up, and now had unusual leverage on me. I barely managed to keep the fish out of the roots as it tried with all it's might to wrap itself up some more. After several minutes, I managed to bring the fish close enough to net. I scooped her up in my small trout net and she hung over the edges. Sometimes, a small net is better than no net. 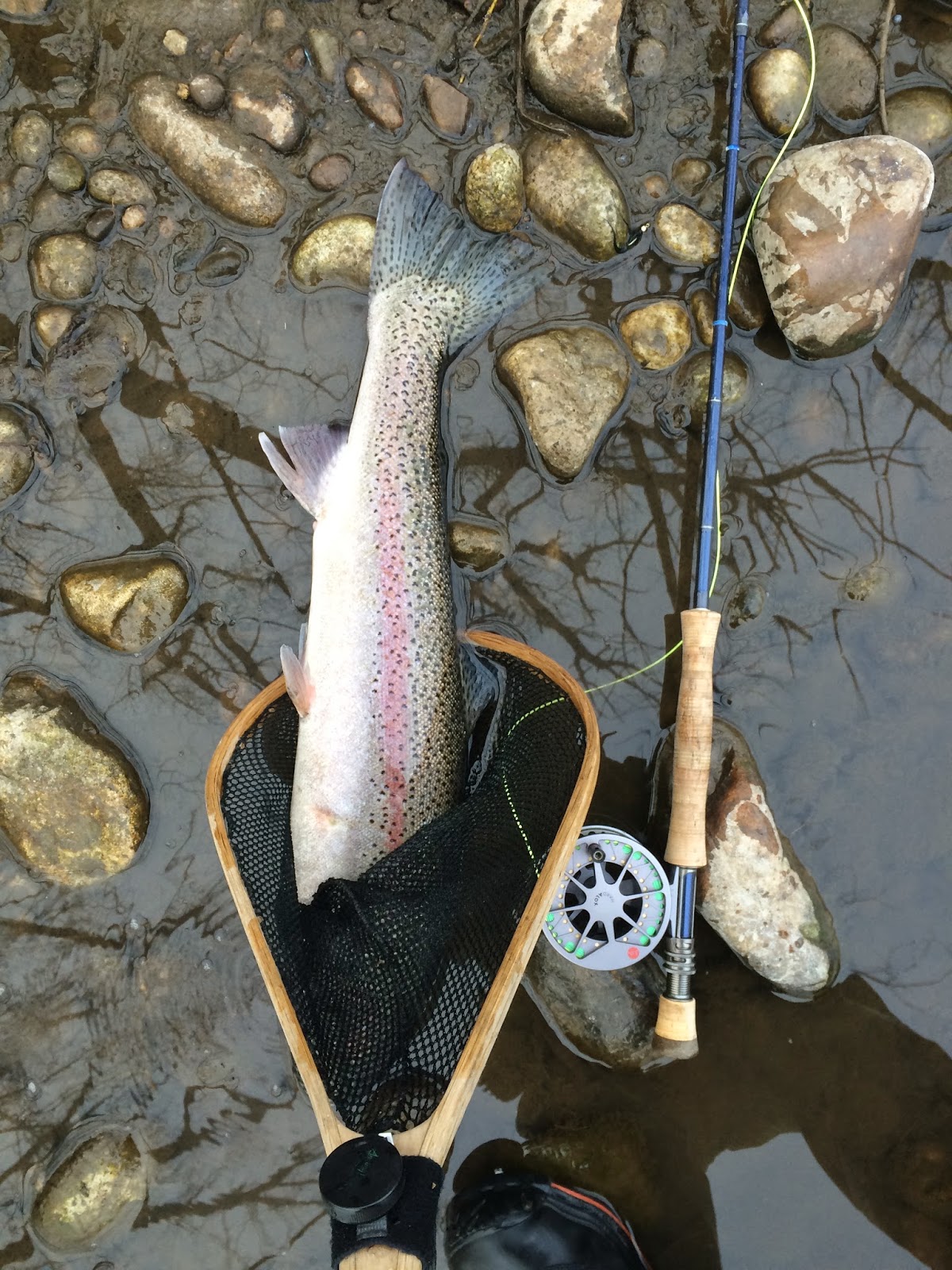 I stood there amazed that I had actually hooked and landed another Boise River steelhead. It was the end of January and they planted these fish in mid-November. The latest I had fished for them in the past was early December. It's pretty neat to be able to catch fish like this all winter long. 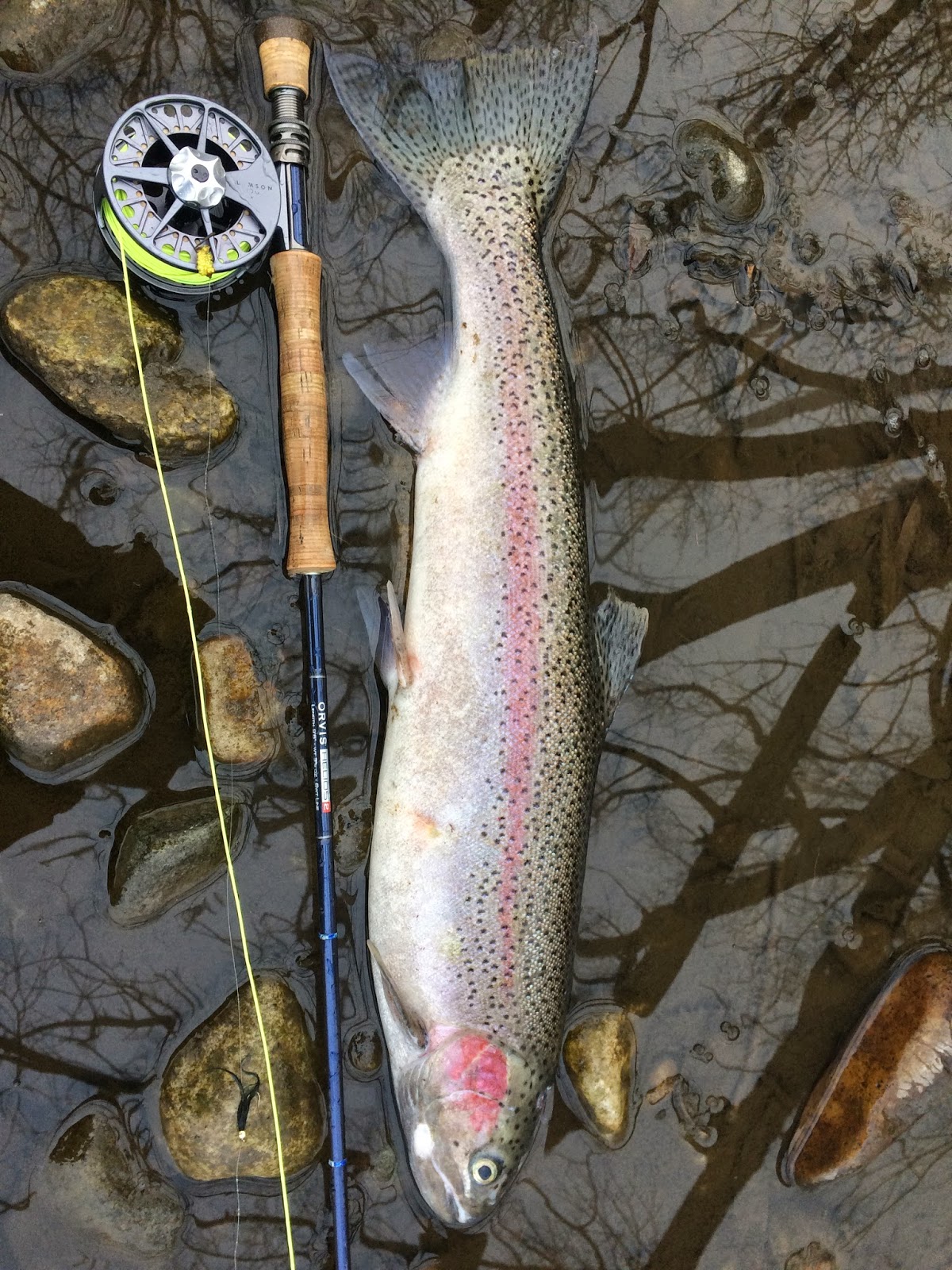 The fat hen measured out at 27 inches. Besides being very delicious smoked, I feel like I'm doing these fish a favor by keeping them. Boise River steelhead are resilient survivors but I know their lives are practically over when they enter this foreign river. I admired the beautiful colors on the fishes tail for a moment. 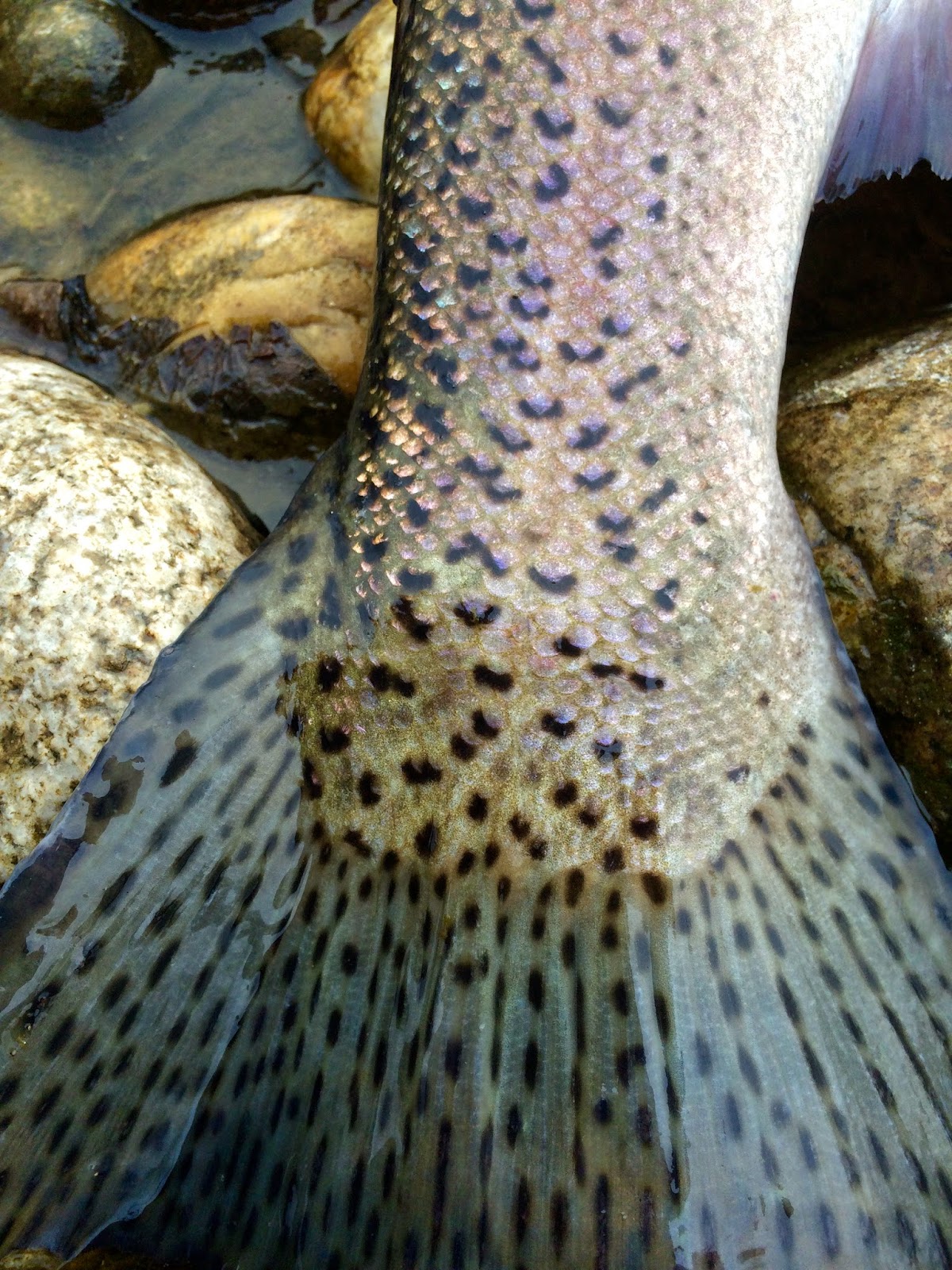 I looked at my watch and realized if I was going to keep this fish, I better leave now. I didn't even have time to make another cast. If there were more fish in that spot, I'd have to get them another time. I grabbed my fish and gear as I headed back to my truck.

I couldn't wait to send Erik a picture of my fish. You snooze, you lose! 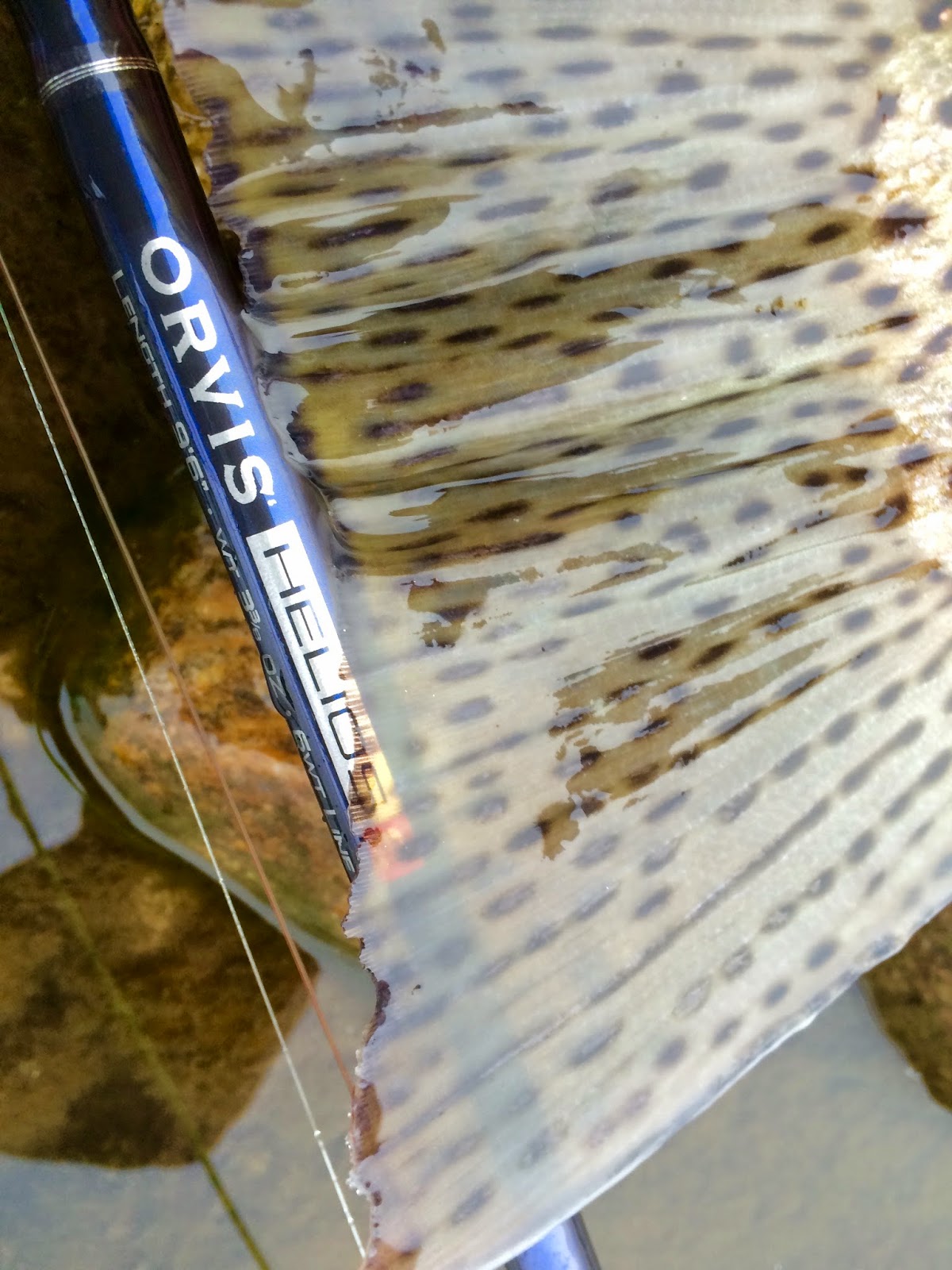 Posted by Ryan's Fly Fishing and Hunting Blog at 9:02 PM