For some outdoorsman, the month of September means bow hunting. I do not bow hunt and don't get me wrong, I would love to learn how, but I doubt the bank account could support another "gear rich" hobby. For me, September means dove hunting. It's a wonderful way to "dust the cob webs off" of your wing shooting. What's better practice than real birds? It's a fun, warm weather, casual hunting activity. One that I look forward to every year.
I am very fortunate to have a friend who lives in Caldwell, and not only loves to dove hunt, but has a great piece of land to hunt on. Ryan invited me to come out and hunt the opening evening of dove season. He said to be out near 6 pm. I didn't want to be driving west at 5 o'clock so I headed out to Caldwell early and decided to spend a couple of hours at Lake Lowell targeting carp. 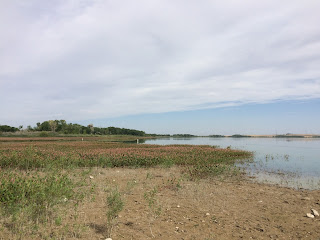 I was delighted to find the lake calm as glass. I geared up and walked down to the water. A thin green layer of algae covered the surface of the water. Gross, I though to myself. I hesitated to enter the water, but the desire to catch fish overthrew my desire to stay clean. 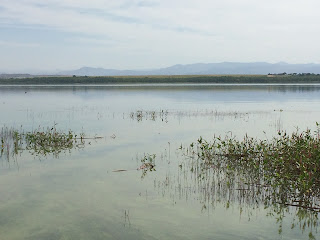 There were small bass all over the place, leaping out of the water after dragon flies, so I decided to start with a small popper. 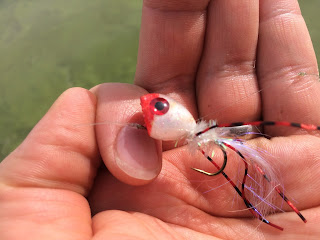 A few minutes of fishing the popper revealed that most of the bass were too small to actually fit the popper in their mouth. I switched to a small carp fly and BAM! I was into a whopper of a largemouth bass. 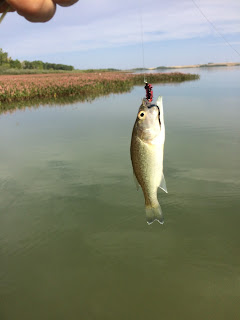 I walked along the weeds a little further and began to see a pod of carp milling near the surface. I could see their leathery, orange lips sucking the slimy, green algae off of the surface. Gross; the cockroaches of the aquatic world. These things will eat anything! I thought as I tied on a small, green dry fly. I fished the fly for 20 minutes or so with no interest. The carp would suck towards my fly and then turn away when they got close enough to eat it. Apparently they won't eat just anything! 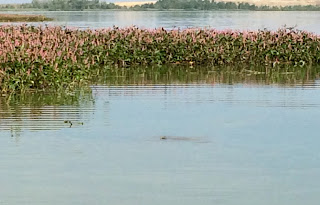 I tied on a small, slow sinking leech pattern and fished that for a while. The carp were still not interested. But this trophy bass sure was! 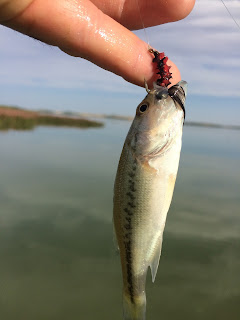 I kept trying for the carp with a couple other patterns before giving up. It was nearly 6 and time to switch gears to dove hunting. On the way to Ryan's house, I saw plenty of doves, making me very excited to hunt.
When I got to Ryan's house, he was ready and waiting. I hurried to get my gear in order, but at my feet was Ryan's dog Grace, telling me I wasn't going fast enough. 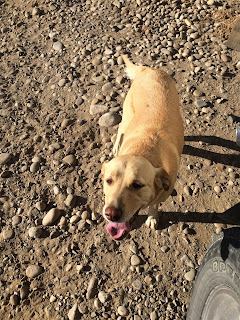 We walked out to the edge of the hay field and began setting up on the canal bank. Ryan had taken a couple of tree branches and buried them vertically in the ground to look like small trees. We clipped a few decoys on them as well as on a nearby fence. 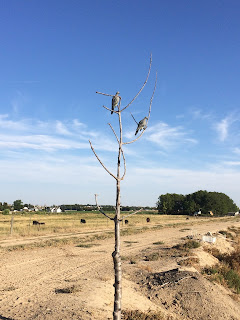 With our set-up complete, all we had to do was wait. Doves are fast flyers, and it seems that no matter how alert you are, they can show up out of nowhere. Luckily, I have a bucket with a lid that has a swivel seat. No dove is sneaking up on me! I thought to myself as I spun around like a little kid who'd never been on a rotating chair.
My self confident daydream was interrupted by Ryan's word's, "Behind you!"
I turned around to find 3 doves bombing towards me at mach speed. I mounted my shotgun just in time for them to fly over my head at 5 yards high. I spun around to pick a target, only to find that the 3 had curved to the left and were headed towards the neighbors' herd of cows. If I shot, my pellets would likely hail down onto some cows. Those doves were safe now.
"Dang-it! Those suckers snuck right up on me!" I said, returning back to my seat.
As I spun to look at Ryan, he stood up and shot a single dove that had also snuck in.
"Nice, Ryan!" I said, as I watched Ryan's 2 dogs, Gauge and Grace, retrieve the bird. 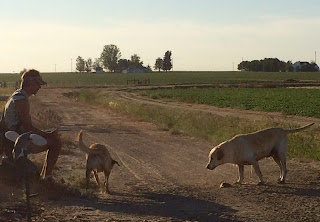 Gauge brought the dove over to Ryan, but dropped it 6 feet away and stood there to see what Ryan would do.
"Gauge! Bring it here." Ryan said, with authority.
Gauge picked up the bird and brought it over for Ryan to take.
"Good boy. You know what you're suppose to do."
We sat around and talked for a bit before more doves flew our way. Once again, taking me by surprise, a double flew into range. I caught them out of the corner of my eye, but this time I was determined to at least get a shot off. BOOM! The birds kept flying and within a couple of seconds were out of range. Dang, I hung my head low but reminded myself they were small, fast targets.
In the meantime, another dove swung low towards Ryan and he made a quick, clean kill. 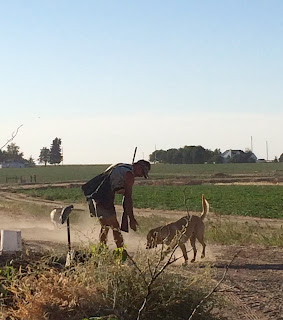 Gauge brought the dove to Ryan's hand.
"Good job, Ryan. I'll get a dove one of these days." I chucked.
Another small group of doves came straight at me and gave me the perfect shot. BOOM! Miss. BOOM! Another miss. Crap!
"I'm a little rusty, Ryan." I said, as I reloaded my shotgun.
"You need to lead them more." Ryan said, just before he blasted another dove. 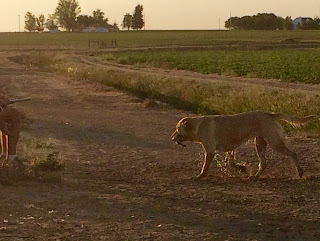 Ryan had spent several years competitively shooting clays, so I'm used to him making me look bad.
After missing another few, my pellets finally connected with a mourning dove. Grace quickly picked it up and I called her towards me.
"Good girl. Thank you. Finally!" I said, taking the dove from her mouth.
The action was starting to heat up and we began to see more doves. A group of 3 came low over the hay field directly at me. I mounted my gun as one started back-peddling to land in a bare patch at 15 yards. BOOM! I dusted the one bird and moved onto another. BOOM! My shot missed, so I quickly moved my eyes back to where I had marked my dead bird in the hay field. The 2 dogs worked the field in search of the bird. Grace came out as the winner, bringing me the dove. 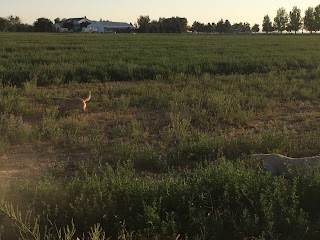 Our pile of birds were growing as we continued to pick off one or two here and there. The sun was nearing the horizon, casting long shadows and making it impossible to detect incoming doves from the west. 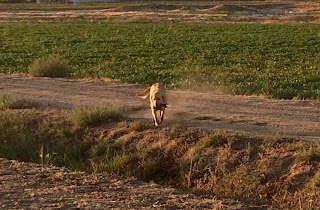 Another single came over and Ryan made a clean kill, sending Grace into action.
A few minutes later, I dusted a single from a good distance out and Gauge brought the dove to hand. 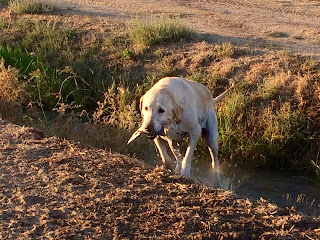 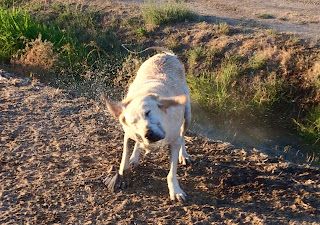 Gauge made it a point to shake off the canal water right next to me, like any faithful dog would.
Legal shooting time was nearly upon us, creating a wonderful sunset. We decided to call it a day and gather the decoys and our spent shells. 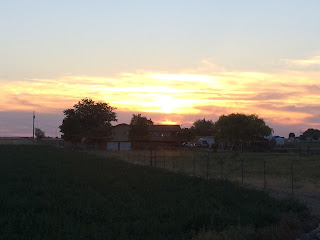 We laid the birds out on the tailgate of my truck and divided them up equally. We certainly didn't limit out, but 14 doves is a great dove hunt any day. Although the mourning dove doesn't give you much meat, they have a wonderful mild taste that melts in your mouth, especially when grilled. It was a wonderful evening of dove hunting that helped my shooting improve. I'll now be much more prepared for the next wing shooting adventure. 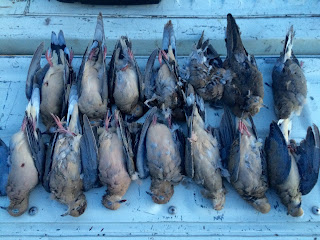 Posted by Ryan's Fly Fishing and Hunting Blog at 2:38 PM