My wife and I have started a tradition of hiking into a high mountain lake every year for her birthday. This year we chose one we had never been to, Marge Lake, North of McCall. I had to work until 6 on Friday evening and we planned to hike on Saturday. Instead of doing the logical thing and leave early Saturday morning in the daylight, we choose to leave Friday night and drive in the dark to a brand new place, setting up camp in the dark. But when you're excited to get out of town, you just want to get out of town.
We found the trailhead no problem and found a suitable spot to camp nearby. At 11:30 PM, we crawled into the tent, just as frost was starting to cover everything.
We awoke early the next morning to find the sun nearing the horizon and beginning to melt the frost covered woods. We packed our things for the day and set out on the trail. It was grouse season, so I brought my shotgun. I debated carrying the thing all the way into the lake, but if I didn't, we would surely see a lot of grouse. Worse yet, we might see a pack of ferocious, rabid wolves. Ok maybe not likely, but it never hurts to be prepared. 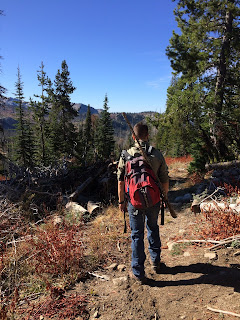 The area had been burned in the last 15 years and there were a lot of standing snags. 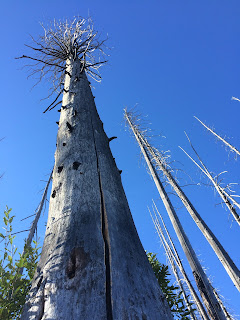 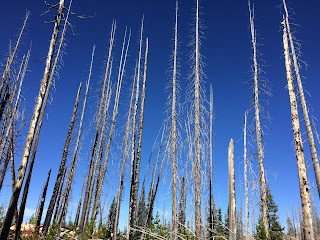 The trail was relatively flat and easy going as it meandered through the burnt trees and colorful fall bushes. 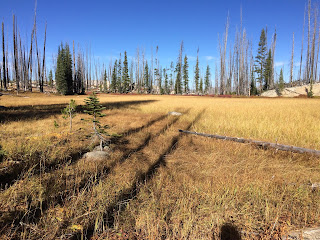 The path took a turn and crossed the small creek coming out of Pearl Lake. We knew we were now getting close to Pearl Lake. The trail began to head uphill and gain elevation. We reached the top of the hill and had a wonderful view of the valley and surrounding mountains. 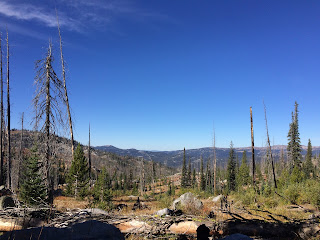 We hiked a little further and Pearl Lake was before us. 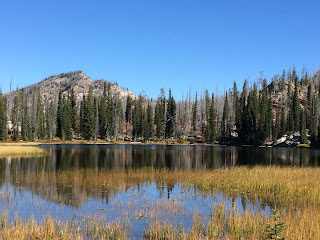 We knew the fishing in Pearl Lake was good, but we were in search of larger, less educated fish. Marge Lake was only another mile or so, but there was no marked trail. I got the map out and made a few bearings.
"Ok, honey. You up for this?" I asked, as we stared at the so called "trail" in front of us.
"Yes, I think we should. We've come this far. We need to check out that lake." Katie said with optimism. 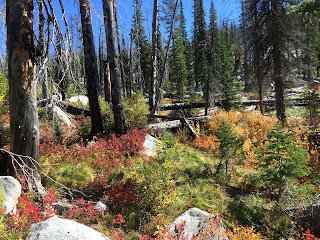 We began to work our way through the fallen trees, bushes and rocks, slowly gaining elevation. According to the topography map, we would need to gain almost 500 feet of elevation to make it up and over the mountain in front of us. 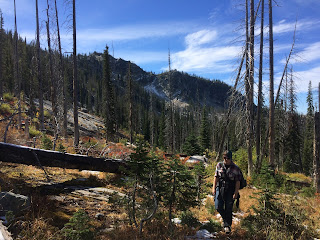 It was difficult to navigate without a trail, but we eventually made it up to the top. 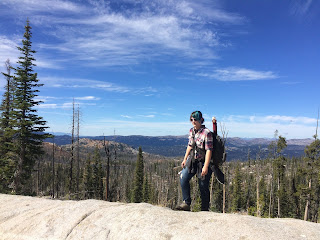 We took a moment to catch our breath and enjoy the beautiful view.

The fresh snow at the top reminded us that winter always has a grip on the mountains of Idaho. 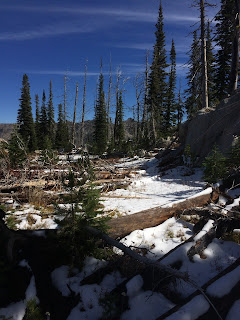 We could see Marge Lake below us now and my excitement grew. Now we only had to drop another 500 feet of elevation, a detail I knew I would dread on the way out. 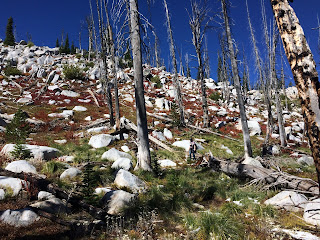 The lake was crystal clear and I couldn't wait to peer into the water in search of cruising fish. 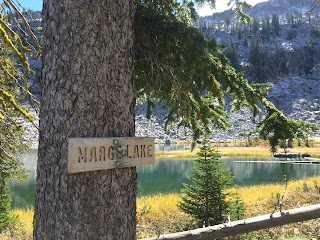 It was nearly noon and the strenuous hike had given us a fierce appetite. Of course, I didn't know I was hungry because there was a lake with fish in front of me. My wife usually has to remind me it's time to eat in these situations. While I rigged up the fly rods, Katie made us a couple of sandwiches. 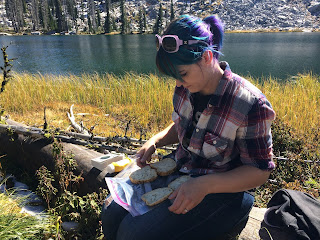 I "woofed" my sandwich down, drank some fluids and had a fly rod in my hand in about 3 minutes flat. I walked out onto a log that extended into the lake and began casting a small black beetle pattern. I was just about to lift the fly off the water to present my 3rd cast, when a large shape emerged under my fly. The large cutthroat trout sipped my fly slowly, but deliberately. I set the hook and was amazed at the size and fight of this fish. 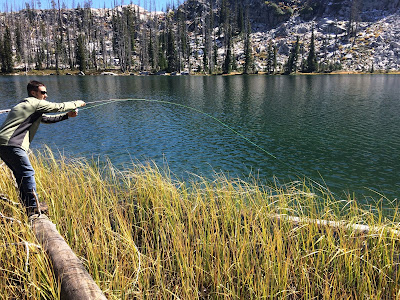 The little 4 weight reel was whining as the fish pulled with all it's might. I slowly worked the fish in and apprehended him. I was thoroughly satisfied with the quality of our first fish at Marge Lake. 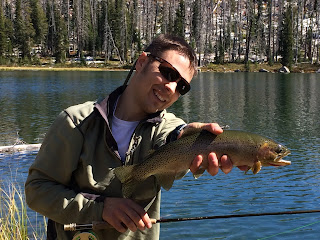 After releasing the fish, we worked our way further down the lake towards a small wooded cove. We walked out onto some logs and began casting. My eyes were scanning the clear waters for a cruising fish to cast to, when something strange caught my eye. A fish, no 2 fish, 3, 4... a whole school of trout was swimming towards us! 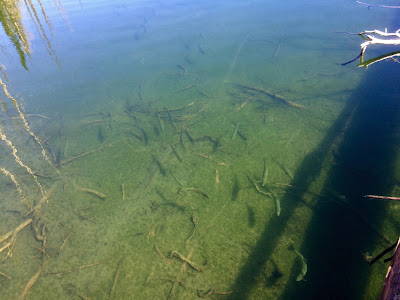 The school of 10-16 inch cutthroat swam right towards us and passed directly under the log we were standing on. They then swam around behind us in search of food, surprisingly unafraid or unaware of our presence. Katie made a soft, short roll cast towards the fish. A quick twitch brought the "Bumble Butt" fly to life and a cutthroat responded favorably. 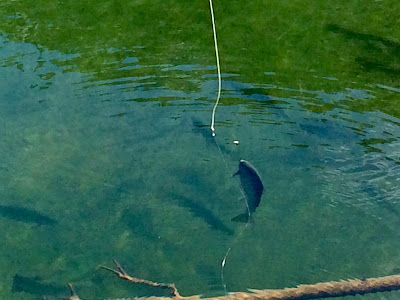 Katie set the hook on the 14 inch fish and the battle was on! The fish immediately dove for the submerged branches twisting and turning. Katie did her best to control the fish but it was no use. The fish swam around a branch and the line was stuck. The fish was still on the line though, still spinning and kicking. I carefully walked out onto the log, trying to keep my balance. A fall in the snow chilled water at this point would surely ruin my day. I slowly knelt down where the fish was stuck and reached into the water to unwrap the fish. I was able to get the fish unwrapped, but now I was out in the lake on a thin log and unable to turn around. I carefully began crawling backwards on my knees until the log was wide enough to get my balance to stand up, a task that quickly reminded me I wasn't as young as I used to be. Like a newborn fawn, I slowly wobbled myself to a standing position and turned around to get a picture of Katie's fish. 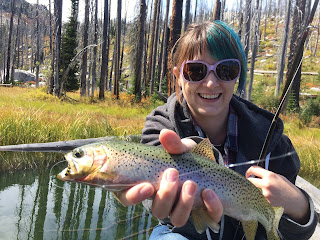 Katie released the fish and we waited for the school of cutthroats to return. It only took a few minutes before the school was back and cruising around at our feet amongst the cover of the sunken branches. Katie dropped the fly off the tip of the rod and gave it a couple twitches. A fish materialized beneath the fly and slowly rose to devour it. 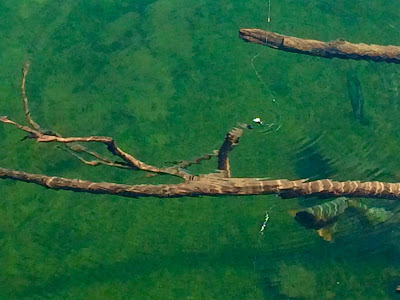 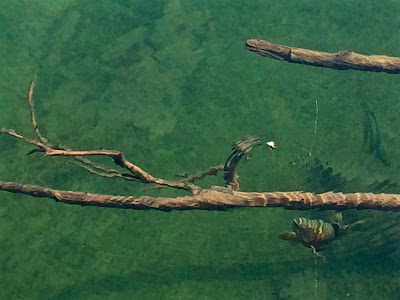 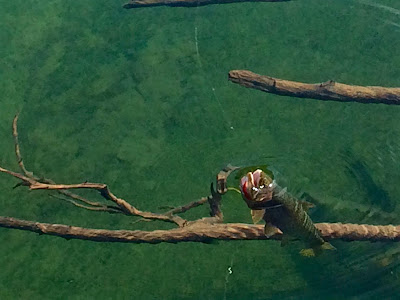 We both giggled as Katie set the hook.
"That was so cool! That fish ate the fly right here!" I said, as I looked through the photos I had just taken. "And I got pictures of it all!" 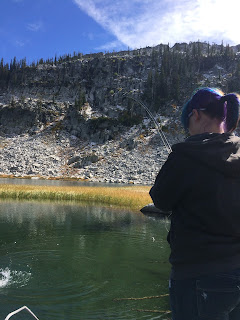 We didn't want to spook all the fish again, so Katie gave the fish some slack, letting it shake the hook. It shook it quickly and she placed another cast to the school of fish still in the area.
We had fun playing around with these fish for some time before we decided to move on. We crept around the lake to another cove, this one covered in submerged grass. We couldn't see any fish and nothing was taking an interest in our flies, so we kept going.

We reached the rocky side of the lake where the mountainside seemed to disappear into the depths of the lake. Large, granite boulders became our trail, as we hopped from one to another. We made casts here and there in search of guilable fish. We kept hearing loud squeaks behind us and I turned around, catching a glimpse of an illusive Pika, the "gerbil" of the alpine country. 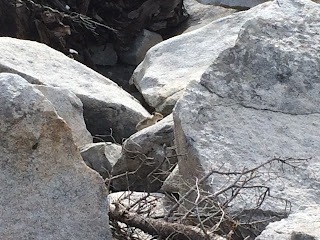 We kept moving around the lake with no success. While one end of the lake was deep and rocky, the other side was quite shallow with prevalent weed growth. This is a great balance for a high mountain lake, ensuring the fish have cover and great areas for feeding. 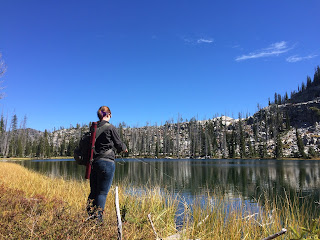 We made it all the way around the lake, with only having success on the side we had started. We decided to try the cove where we had caught all the fish before. We walked out onto the logs and stood waiting for the school of fish to reappear. The school never reappeared, and I noticed it was starting to get late. I knew we better start hiking back so we wouldn't be stuck hiking in the dark. We packed up and began the trek up the steep mountain, which seemed even more steep than before. We huffed and puffed our way to the top, where we could see Pearl Lake below us.
When we reached Pearl Lake, we stopped to take a short break. I couldn't let myself walk past the lake without throwing a few casts. I rigged a rod back up and made some casts. 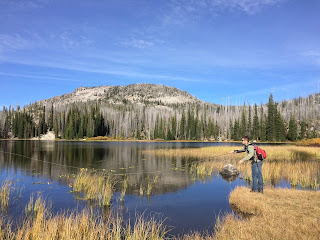 Immediately, I was rewarded with a fish that shortly shook the hook. My next cast also produced a take that I wasn't able to set. Pearl Lake showed promise, but as quickly as the action had heated up, it died down. Despite trying a couple other areas around the lake, Pearl Lake was giving us a sign it was time to head back to camp.
I packed up my rod and we set back on the trail. With the motivation of fishing now gone, my legs told me they were weary and tired. We finally made it back to camp, where the once cold, hard slab of granite barely worth noticing was now an inviting bed to relax our tired bodies. 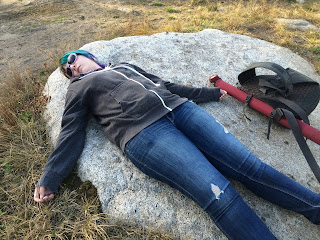 We made a fire, ate a healthy sized meal and watched the sunset. The day had been a blast and we couldn't wait to see what tomorrow would bring. 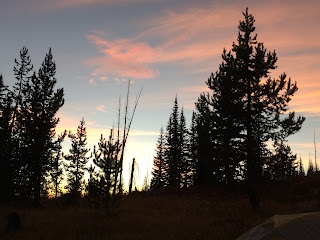 Posted by Ryan's Fly Fishing and Hunting Blog at 4:14 PM