After a successful salmon fishing trip in 2015, I was more than eager to return to the river in 2016 to fly fish for chinook salmon once again. My good fishing buddy Camron was also ready to jump on board. Camron had fished for salmon in Idaho several times and had yet to land one. We planned a couple days, and as fate would have it, 5 am I was picking Camron up at his house.
By 8 am we were cruising downstream on the river, headed to the spot we had caught fish last year. Unfortunately, Camron works a "real" job and could only get Friday off. This forced us to fish Friday and Saturday, just like all the other "normal people". As we drove downstream, it was obvious we wouldn't be alone on the river. RV's and trucks occupied nearly every pullout and wide spot on the road. Some fisherman even chose to park and even camp half off the road and half on! 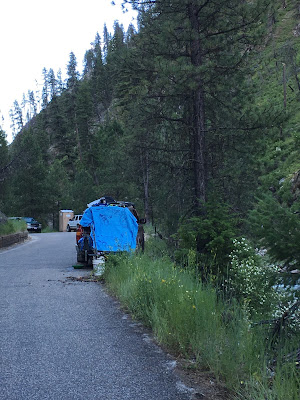 Despite all the people, we kept driving to our spot. Upon arrival, we rigged our rods, wadered up and made our way down to the river where we would cross. 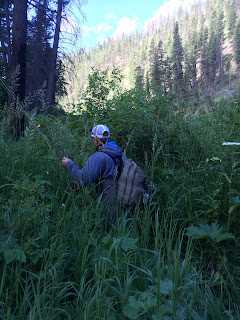 The crystal clear water looked gorgeous and the porpoise of a large, bronze chinook salmon broke the still, quiet morning silence. Camron and I looked at each other with eyes as wide as an owl. We couldn't get our lines in the water fast enough! But like most salmon and steelhead fishing, after several hours and no hooked fish, our excitement level had dropped substantially.
"Gosh, these buggers are hard to catch!" I said, reeling in my setup and then sitting on an uncomfortable rock. "We've seen them porpoise from time to time in the hole but none seem to be interested in our stuff."
"I thought you had this salmon fishing down, Ryan!" Camron said half jokingly, trying to make light of the poor fishing.
"Sometimes I don't think I know anything," I replied, shaking my head. "Let's go back to the truck and make some lunch."
After lunch we decided to take a drive down the river and look for some other places to fish. We ran into one of my friends, who had also not seen much action. We fished a couple spots with only a whitefish to hand. 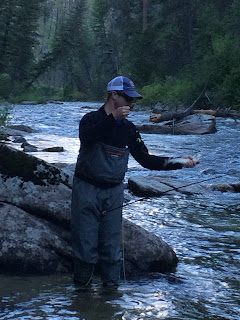 We decided to return to the morning fishing spot and finish out the day there. Last year, we caught all of our fish from 5-8 in the evening when the hillside had shaded the water. We crossed back over and began to methodically cover the water. 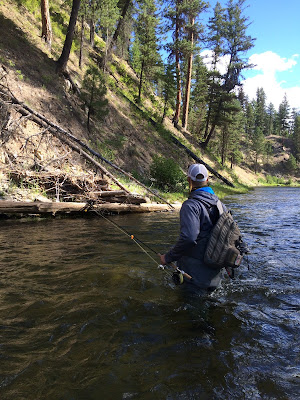 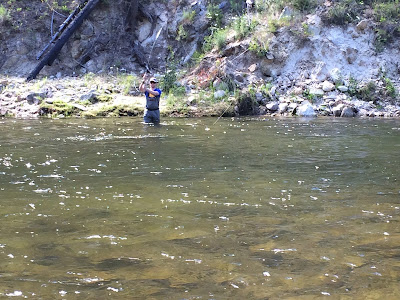 Just as Camron and I began to cast, a salmon porpoised in front of him.
"Get him, Camron, get him!"
Camron had made a perfect cast to intercept the fish. If a salmon decided to take my fly at this point I wouldn't even know, because my eyes were on Camron's indicator instead of my own. Camron's indicator took a plunge and Camron pulled back on the rod like a professional bass angler.
"FISH ON!" Camron yelled with pure joy.
"Nice!" I replied, quickly reeling in my line.
The salmon came thrashing to the surface, and just as it turned to dive back down to the depths the hook popped out and flew back in Camron's face.
"Dang it!" Camron shouted at an even higher volume than his previous "fish on" exclamation.
"Sorry man, that's a bummer," was all I could find to console the now moping Camron.
Despite the bad news of a lost fish, hooking any salmon brings a renewed excitement and energy to the river, and I was now casting with all the more optimism.
There should be a salmon right.....There! My indicator sunk below the surface and I set the hook. The object gave a little, just like a fish. I was almost about to yell fish on, when my "fish" lost all life and slowly began to drag towards me, materializing into a stick. 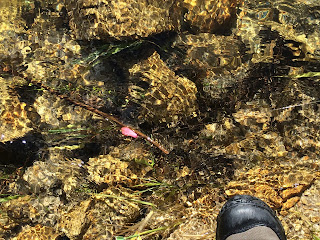 "Camron, get the net!" I yelled, as I hoisted up the 2 foot long stick.
"I'm on it!" Camron replied, going right back to fishing.
We continued to fish hard the rest of the day with only another whitefish to hand. How a 10 inch whitefish fits a 1/0 hook into it's mouth is a mystery to me. 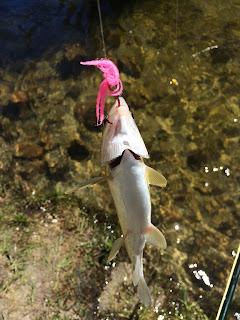 These salmon were proving to be a lot more difficult than we wanted. But we had most of the next day to make it happen and a new day brings with it new excitement. Finding a place to pitch our tent was another challenge in itself. Tomorrow was Saturday and the vehicles had begun stacking up on the river like we wanted the salmon to be stacking up. Every pullout had several vehicles in it and we had to drive nearly ten miles away before we were able to find a place to pitch our tent a safe distance away from the road. The hunt for big fish will sometimes take even the most crowd tolerating fly angler to his limits. Hopefully tomorrow it will be worth it...I thought as I drifted to sleep. 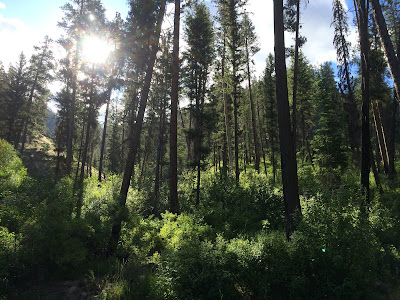 We rose early the next morning and found ourselves back at the same hole. Once again, a porpoise of a salmon brought our sleeping minds wide awake. I made a cast to intercept the fish, and as luck would have it, my indicator went down.
"FISH ON!" I said with a big smile.
"Sweet!" Camron said reeling in his line and grabbing the net.
The fish ran and almost took me into my backing before slowing down. The hole we were fishing had plenty of large boulders that the fish was trying to wrap me around. But I kept the rod high and in full flex to muscle the fish towards me. After a decent battle, Camron scooped the fish into the net and we were on the board. 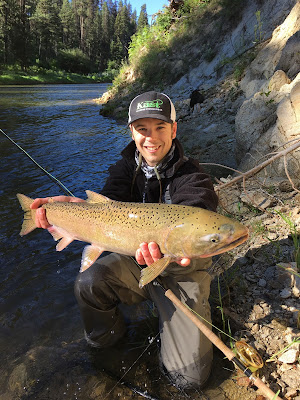 I was very happy to see a wild fish in the river. Last year we had only caught hatchery fish, and don't get me wrong, I enjoyed eating them, but the thrill for me lies in the catching of these fish, not the eating.
"Just think Camron, most of the people on this river would be disappointed to catch a wild fish because they couldn't keep and eat it."
"It's a different crowd up here man," Camron commented, shaking his head. 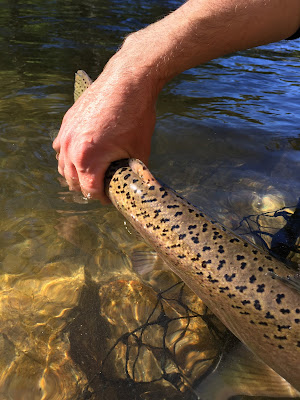 We sent the 27 inch fish back to the depths and celebrated by quickly getting our lines back in the water. We fished hard for the next several hours before deciding to explore some more of the river.
We immediately began to regret our decision to leave our nice quiet spot when we saw how many people were on the river. It was even hard to drive down the road without hitting someone. Most holes had a dozen vehicles in them and numerous people standing in the road watching the others down on the river fish.
"Jerry!" Camron yelled as we drove past a crowd of people standing around.
"Did you know one of those guys back there?" I replied, chuckling.
"Nope, just thought one of them looked like a Jerry." Camron replied, as we both laughed.
We rounded the corner and approached another group of guys standing around drinking beer.
"Jerry!" Camron shouted from inside the vehicle just loud enough to get a few of the guys attention to turn and look as we drove away. Camron and I busted up laughing.
There were so many people on the river that finding a spot to fish was getting depressing, and shouting "Jerry" lightened the mood.
We stopped at a promising spot and to our surprise, no one was there. We crossed the river and got into a more favorable position for an effective drift. 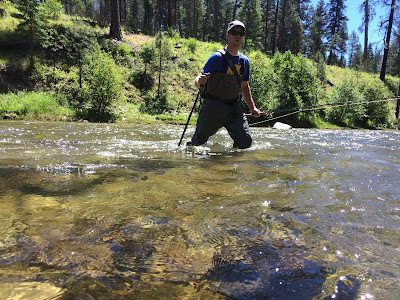 When fishing for salmon, you want to find areas that funnel the fish. That way, you know where to cast to intercept every fish that swims through that area of the river. This spot had a perfect funnel and a deep slot to make them feel safe as they traveled through. 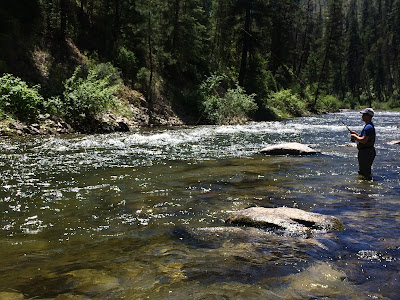 Camron got into position and a porpoise of a very large bronze fish got us giggling with excitement. It only took 15 minutes and Camron was into a fish.
"Nice, Camron! Keep him away from those big rocks. He'll try to get you stuck!" I said, as I grabbed the net. 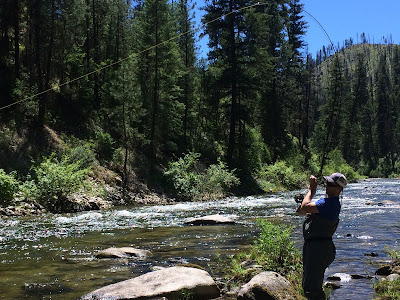 Camron was putting the muscle on this big fish as it dodged back and forth in the heavy water and dove from rock to rock.
"Get even with him and angle your rod downstream." I said, as the fish pulled towards a large boulder.
"Crap, I can't stop him. He's too strong!" Camron said, as the fish rounded the backside of a large boulder and began to swim upstream on the opposite side, pinning Camron's line under the rock. Camron's line went slack and the fish was gone.
"Ugh!" Camron slapped his rod down and big fish depression set in.
"Sorry man, it happens. They are just strong fish and you're going to lose some." I said, slowly collapsing the net and setting it down under a bush.
A large fish continued to porpoise on the opposite side of a very "snaggy" large rock. It seems the fish and the rock were in the tackle business together because every time we tried to get a drift to that fish, we would snag on the rock and loose our whole setup. We eventually moved on to another spot after we had lost enough gear to make us sick.
The day was fading fast, so we drove upstream to one last spot before it was time to head home. This area also had a funnel-like slot that we suspected all the fish would choose to travel. Sure enough, after a half hour of fishing, one fish exposed himself and we knew where to cast. I continued to cast to where I had seen the fish rise and eventually hooked him. 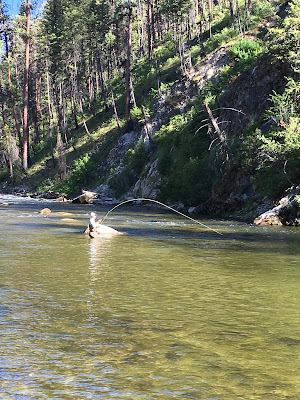 I suspected I foul hooked him by the way he fought. Every time the fish swam away I could feel the kick of his tail. I knew it would be a long hard battle, so I doubled the rod over and gave the fish all I had. This way, the fish would either break off or the battle would be quick and less stressful for the fish. The first was the case, after a few minutes the fish popped off.
Camron continued to pound the water as I took a break. A fine specimen of a frog was also taking a break near me and allowed me to get very close to him for a picture. I knew if I was taking pictures of frogs, I was done fishing. After Camron had admitted defeat, we packed up and headed home. 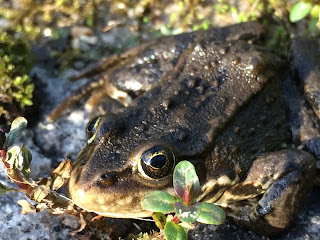 It had been a great trip and we learned a lot. We found some new water to fish and also came to the realization that weekends were just too busy. Unfortunately, Idaho was making Camron earn his first chinook salmon. The blank stare on his face as we drove home told me he was already scheming for next years revenge...