The Strange Fish in Utah

Over the years, I've really grown to enjoy the diversity fly fishing in the Northwest has to offer. So when my wife and I made plans to visit our friends Camron and Kylee in Utah, I made sure to capitalize on some "different" angling opportunities.
"Where should we try fishing?" Camron asked before our trip.
"I'm easy, but I'd kinda like to do something different; something I can't do up here." I replied, hoping I wasn't being too picky.
"We could try for pike at Yuba. Or tiger muskies at Pineview?"
"Now were talking! That sounds fun!"
My wife and I made our way down to Utah, and 5am the next morning, Camron and I were tip-toeing around the house gathering our things for a morning of chasing tiger muskies at Pineview. Camron had never caught one, but knew where to go. Tiger muskies have so many sharp teeth in their mouths, that fishing with a steel leader is a must. I couldn't find my spool and Camron didn't have any. Luckily, Kylee had some beading wire, so we tied up a couple make-shift leaders and we were ready to go.
We made it to the lake, walked down to the water and slowly waded in. There were a lot of sticks and aquatic plants to hide a large tiger musky; this bay looked very fishy. We began casting our large, flashy streamers to every potential luring place of a large predator. 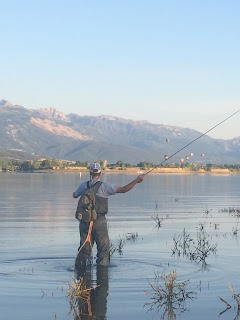 I placed a cast in between an island of moss and a group of sticks. Out of nowhere, a large fish charged my fly and inhaled it! I set the hook and the fish flew out of the water. A tiger musky!
"Camron! I've got a tiger musky!"
"Ryan, you dog! I can't believe you got one!"
The fish kept trying to wrap me around every stick in the neighborhood, but my eight weight came through and Camron scooped the fish in the net. 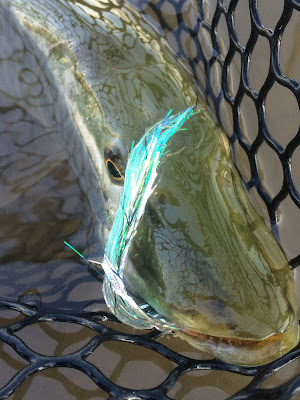 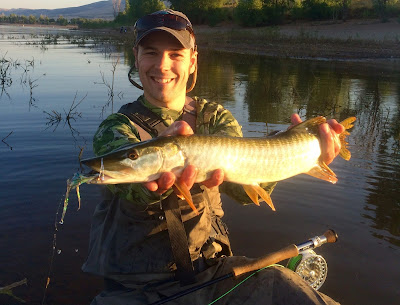 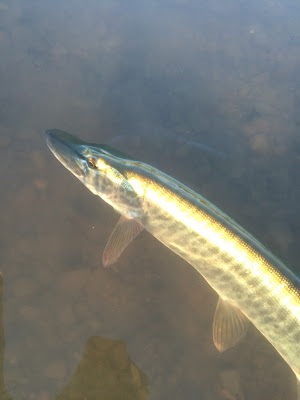 We released the fiery fish and went back to prospecting for more tiger muskies. Camron led the way as we worked around the small bay. There were plenty of potential lurking places, but as the morning progressed, we eventually gave up and switched gears. Camron had caught numerous mirror carp in the past at Pineview, blind-casting leeches. I decided to try that tactic.
I slowly stripped my black leech along and sure enough, a fish grabbed. I was quite surprised when I set the hook and a very large goldfish came thrashing to the surface. 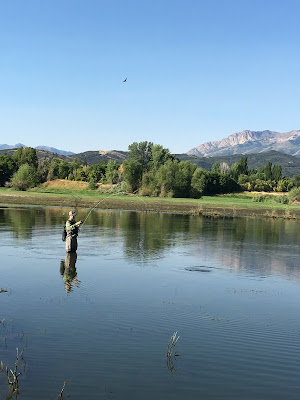 Camron came running over to help me land the strange looking fish. 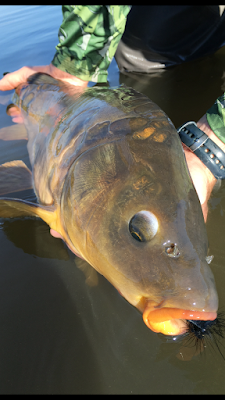 Mirror carp are similar to common carp but only have scales in a few places; not the prettiest fish. 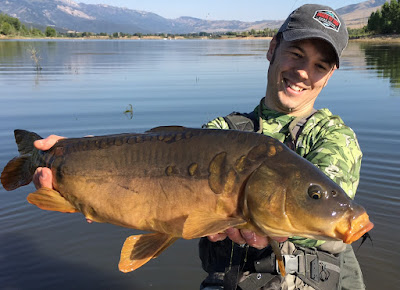 I sent the large, ugly, stinky fish back to the muddy, slimy depths it called home and went back to blind casting. Several minutes later I heard a shout from Camron. 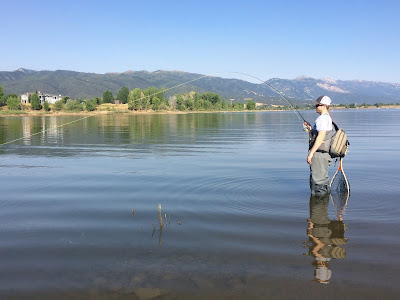 "This fish took a small minnow pattern. These things really are aggressive." Camron said, as his mirror carp made another long run.
"I wish all carp were this aggressive!" I replied, as I got ready to net the fish.
After a long battle on the 6 weight, the carp finally came to the net. 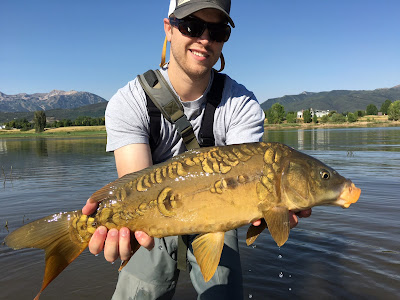 After releasing the fish, we went back to blind casting for more carp. My next fish was not a heavy, powerful carp, but a crappie! 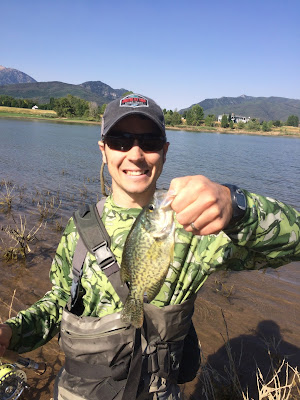 Camron answered back with a monster of a largemouth bass. 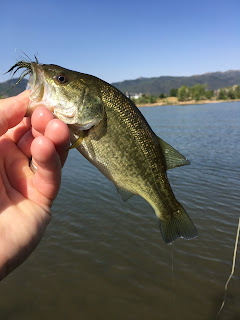 My next fish was a yellow perch. 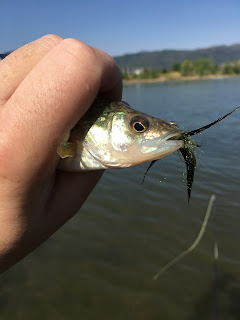 Pineview was sure giving us some diversity. After a couple more hours and only a few more bass and perch to hand, Camron and I called it a day.
We had a great evening and following morning visiting with Camron and Kylee, but Katie and I eventually had to make our way back to Boise. With a few hours to spare, the fish in Hagerman would recieve our attention.
The first stop: the carp hole. Katie had a lot of fun this spring catching her first carp and she was eager to catch another. We snuck into position and began casting. 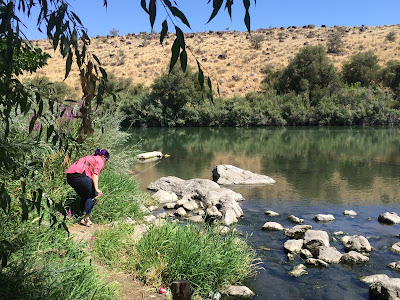 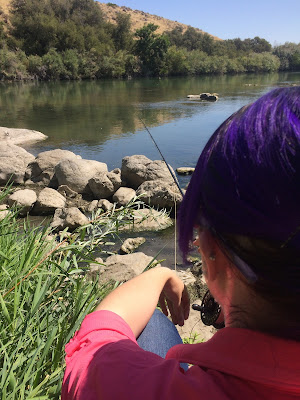 There was no shortage of carp today; we could see dozens cruising near the surface just waiting for a delicious Halloween leech. 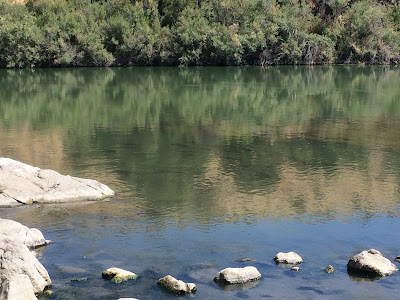 It didn't take long before Katie was flexing back on the fly rod with a large, orange lipped fish on the other end. 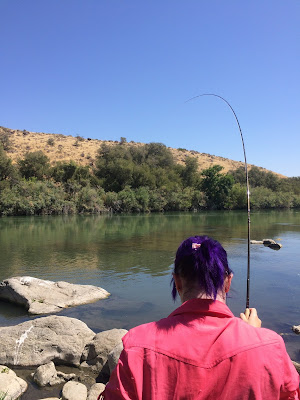 The fish almost broke her off on the sharp rocks, but some quick angle changes with the rod kept the fish in our control. Eventually she tired out the carp and we scooped it into the net. 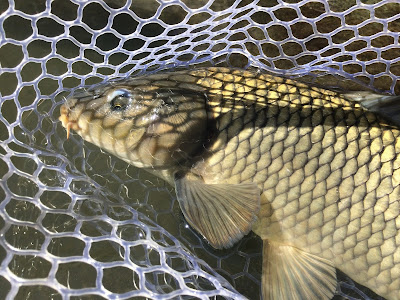 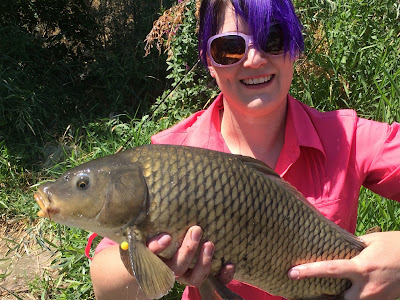 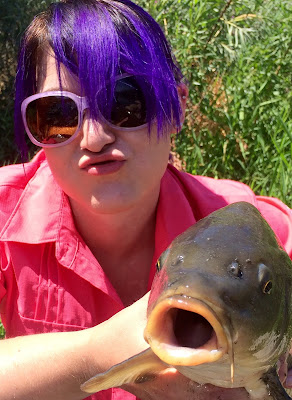 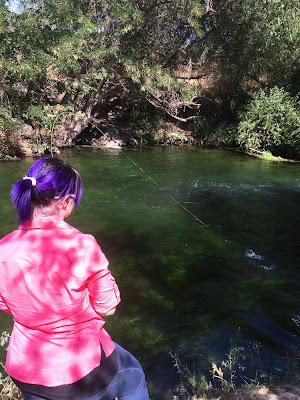 She landed a small rainbow trout and went back to pursuing the bright yellow golden rainbow trout. Katie had yet to land one in the several times we've chased them. Katie's next cast was perfect, and the golden sucked in her bugger! Unfortunately, she wasn't able to get a good hook-set and the golden got away. There was still a couple goldens in the pool so she kept at it. I was instructing her on how to properly jig her bugger, when a golden charged out of nowhere and grabbed my fly. I made the mistake of setting the hook and stole one of her goldens. 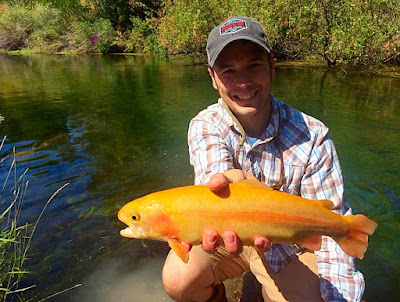 Katie was not happy with me and her disdain for me only increased over the next half hour as she caught several "regular" rainbows and no goldens. Eventually we had to make our way back home, but Utah and Hagerman had treated us well. It had been a wonderful trip and I had added two new species to the list!

Posted by Ryan's Fly Fishing and Hunting Blog at 7:59 AM