A Little Further Up the Road, Owyhee Reservoir

Springtime in Idaho can be frustrating for a traditional fly fisherman. Most wait impatiently for the rivers, high from snow melt, to recede and the weather to stabilize. Other rivers like the Owyhee receive so much "love" that anglers are practically fighting each other for the opportunity to catch a trout with 5 holes already in it's mouth. I embrace this time of year because of the plethora of non-traditional options available; especially if you have some sort of watercraft like a float tube. Trout are available any month of the year in Idaho, but warm water species like bass and crappie are prime in the spring.

Katie and I had so much fun last year fishing Owyhee Reservoir that this year we decided to camp and stay a couple days. We arrived mid-morning, made camp on the river and headed up the road towards the reservoir. We crested the dam to find a still water anglers dream: glassy clear water. 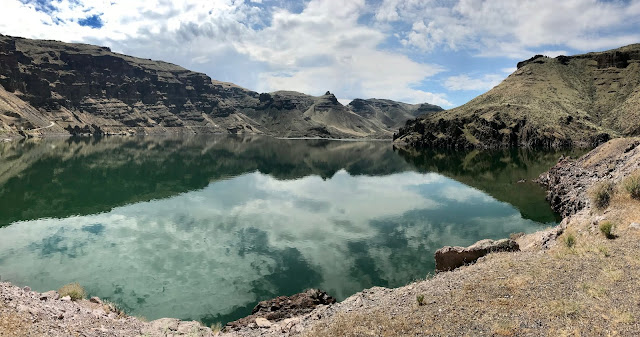 "Wow, that cove is just filthy with fish!" Katie said as we rounded a corner, spying the bass, carp and crappie basking in the warm sunlight.
I chuckled at her expression. "That water is very clear. This is going to be good!"

We arrived at an easy launching place, rigged the boats and kicked out into the calm, clear water. Armed with marabou crappie jigs and balanced minnows under a strike indicator, it didn't take more than several casts before Katie's rod was bent. 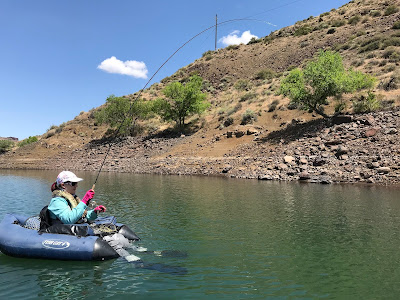 Katie hauled in the fiesty male black crappie, hoisting it up for a picture. 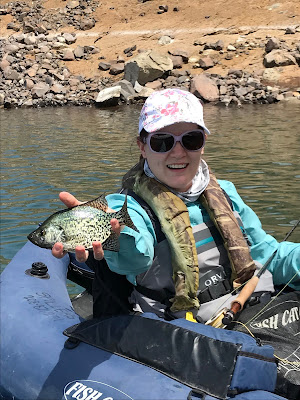 Crappie are delicious and we intended to bring some home for eating. Previous experience has shown me that crappie smaller than 10 inches are harder to fillet and hardly worth the effort. Katie's was 9 inches, so back in the water it went. If fishing was anything like it was last year, we'd have plenty of opportunities to bring home a pile of crappie. 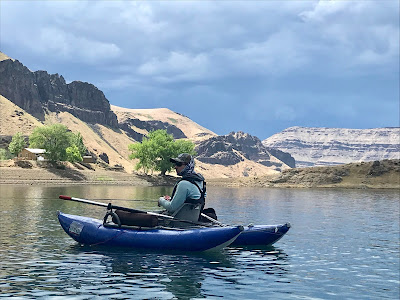 We worked the shore line, heading towards some coves we guessed would be productive. Our progress was slow due to the constant task of unhooking crappie. On some stretches of shoreline, we routinely had doubles and crappie were taking our flies every cast. We began to decipher that the average size was between 9 and 10.5 inches. About every 5th crappie made it onto the stringer. 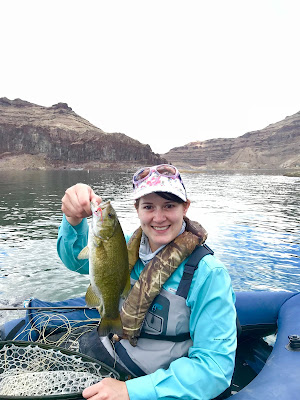 Katie threw a cast towards a rock point. Before the ripples could even dissipate, her indicator took a dive. Katie heaved back on the rod and instead of the scrappy thrashing of a crappie, she was met with the strong deep digging, notorious of a smallmouth bass. After a decent battle, she lipped the smallmouth bass. Owyhee reservoir is home to both smallmouth and largemouth bass.

We were having a blast slowly making our way to the coves, when
dark clouds began to brew. They seemed to all converge over the reservoir promising a thunderstorm. We began to hear thunder in the distance and we kicked hard to get into a cove and out of the water. 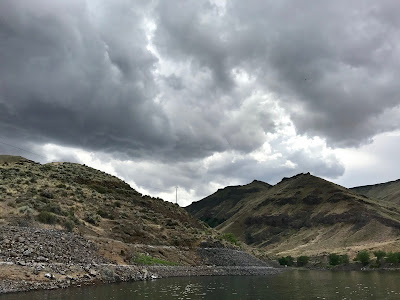 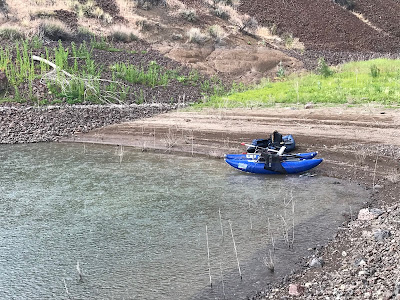 Rain came down hard as we sat on the shore waiting for the storm to pass. I remembered I had an umbrella in the pontoon boat and went to retrieve it. Some say it's precarious to walk in fins, but sometimes I think I'm part duck. 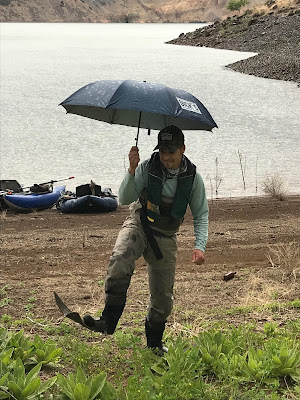 When the storm had subsided slightly, we got back into the boats and made our way to the truck. The air temperature had dropped so much that the air in our boats had condensed, leaving them slightly deflated. We had only covered a quarter mile of shoreline, caught more crappie than we could count and still had about 30 crappie to fillet when we got there. It had been a good first day. 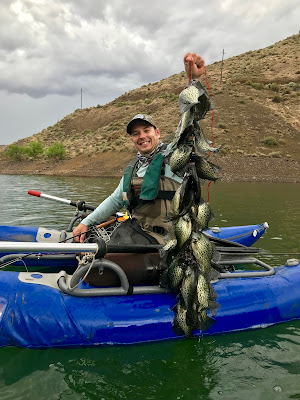 Spying some promising looking water on the drive back, we knew where we would begin fishing the next morning. By 9am we were on the water, catching crappie again. 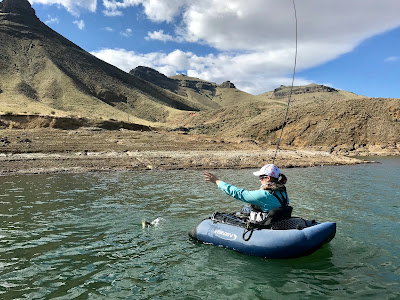 The water clarity was even better at this spot; close to 10 feet! Submerged sticks could be seen; a sure sign crappie would be close by. 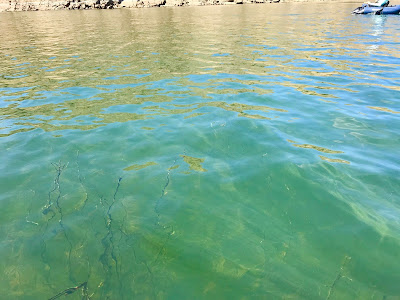 We began catching crappie in good numbers as we worked toward a rocky point. My indicator went down and I set the hook. Immediately a large bronze smallmouth shot out of the water, shaking it's head in attempts to free the foreign object in it's mouth. It put up a great battle, doubling over the rod numerous times. 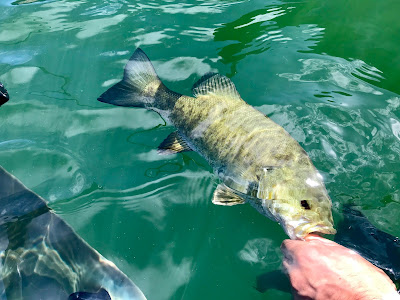 We released the large bass and continued casting towards the rocky point. Katie was into the next fish. Once again, the immediate splash told us we had another bass. 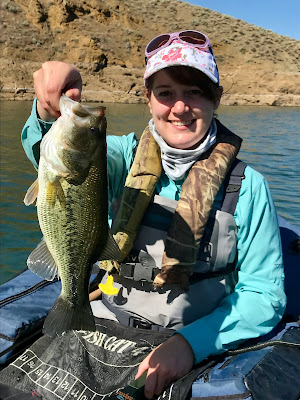 This time it was a nice largemouth. I responded with another bass of my own; a chunky smallmouth. 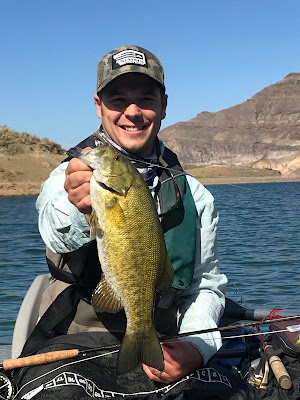 We continued along the shoreline catching more crappie and bass. 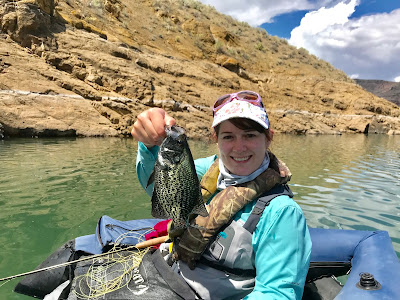 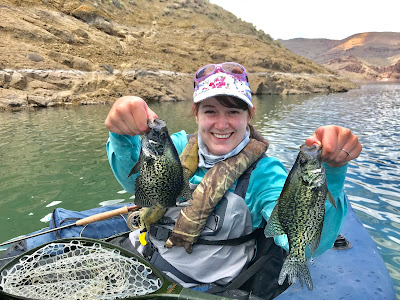 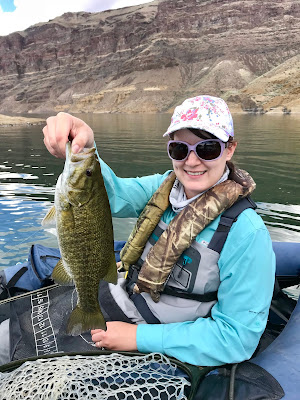 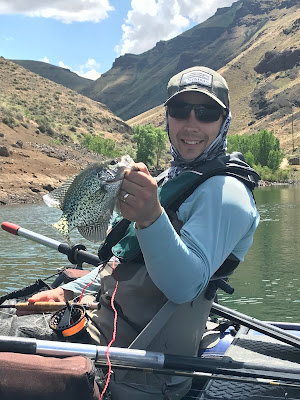 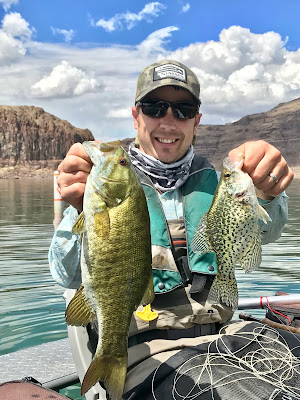 Katie had to remind me it was lunchtime. We kicked back toward the truck. As I ate my sandwich, I couldn't help but think about all the people fishing the river, struggling to catch a few nice trout. Our thumbs were seriously trashed from all the fish we had caught so far, and it was only noon!

After lunch we got back in the boats and decided to work the opposite direction. Once again, more crappie and bass were caught, including one very substantial largemouth. 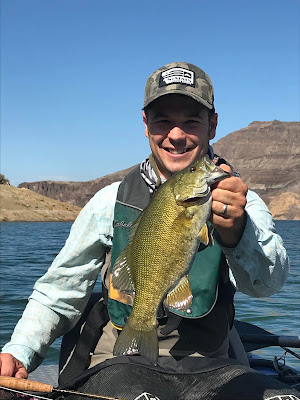 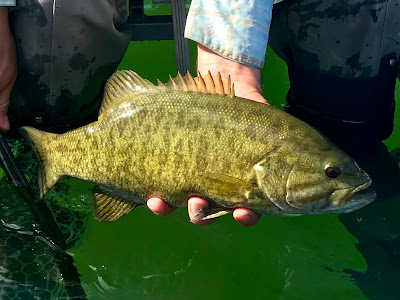 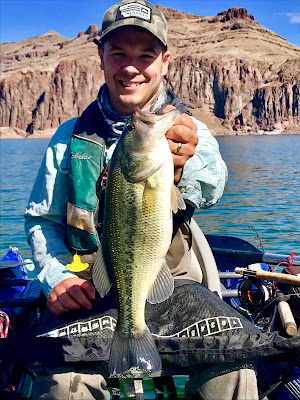 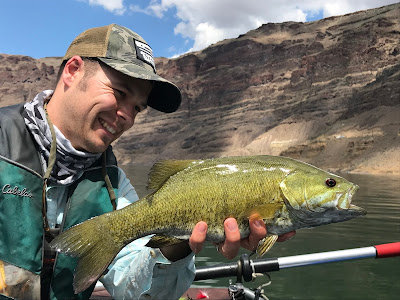 We kicked out to a rocky island that screamed of bass. I made a cast to a small point on the island that looked "fishy". My indicator plunged and I lifted back, feeling serious weight. Off to the depths the fish raced. Giant bass occupied my thoughts as line peeled off my reel. The "wow's" and "holy cow's" brought Katie over to my boat to see what was going on. Finally after a few minutes with no sightings of the creature on the end of my line, gold emerged from the depths indicating I had a common carp. The carp had inhaled the minnow; not a first but a rare occurrence. 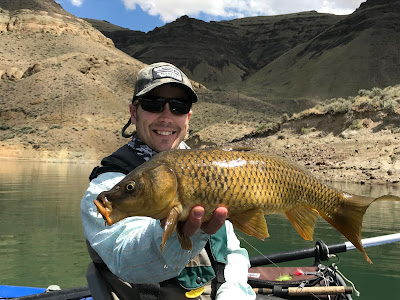 By 4pm we were tired, sore and content with the number of fish we had caught. The weather had been perfect, the water crystal clear and hundreds of fish had been caught. It was now time to fillet another couple stringers of delicious crappie. 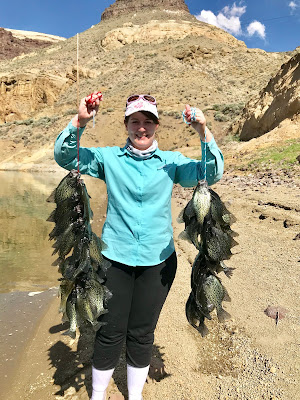 Once again, the hidden fly fishing secret spot, Owyhee Reservoir had not let us down. We would surely return, once our palms and thumbs healed.

Noun
Pricked, scratched and abraded palm as a result of grabbing crappie while attempting to place on a stringer for consumption. 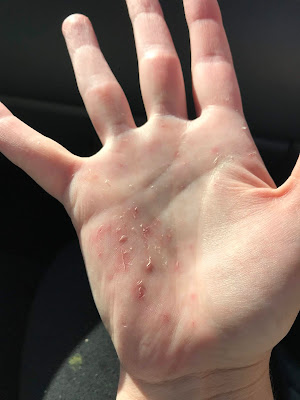 Posted by Ryan's Fly Fishing and Hunting Blog at 6:30 AM