The story of my first buck: Late October 2012


"I'm telling you Trev, I'll probably shoot the first deer I see. I just see walking sausage." I said as we drove to my in-laws secret whitetail spot.
"I really think you should hold out for a buck. At least for the first couple days," Trevor reasoned.
"It'll be tough for me to pass up a doe, especially if it's an easy shot."
"Just promise me you'll try."
"Ok, I'll try, but I'm not promising."
We would be hunting for 3 days in an area where you can shoot any whitetail deer. The previous year I had killed my first deer, as written in my "Double Does" blog entry. I was still in the infant stage of big game hunting, but my in-laws were diehards and they had agreed to take me. I still didn't understand the allure of big antlers. To me they were just funky bones. Little did I know, this hunt would change the way I hunt and see antlers forever.
We set up camp, loaded our hunting gear into the suburban and set off for an evening hunt. We were bouncing down the dirt road, headed to our hunting area when we rounded the corner and came to a halt. A small clearing opened up before us and on the hillside, 150 yards away stood 2 does. My heart raced as I scanned the terrain for all possible targets. There appeared to be only 2 does.
"Oh gosh guys, that's super tempting. They're just standing there broadside. That's a lot of sausage..." I said, staring at my rifle and back at the deer, then back at my rifle.
"It's the first evening. We'll see plenty more." Rick said, staring through the binoculars.
"Ok, FINE!" I said, with a slight sense of doubt in my mind.
We drove on and hunted the area planned without seeing any deer. The next day we decided to walk up a closed road and onto a ridge where Rick would meet us. Trevor and I set out in the early morning on the old road, walking slowly and quietly. We reached the ridge and sat down to do a little glassing, scanning the nearby hillsides for signs of life. Across the canyon we spotted 3 bull elk leisurely feeding in the nastiest, steepest country imaginable. I pictured packing an animal out of that area and shuddered. Good thing we didn't have an elk tag or we might have been tempted... we continued on and Trevor began to tell me stories of all the bucks he'd shot on this ridge. My optimism grew along with the elevation we gained with each step. I'd seen the pictures and shoulder mounts to go alongside Trevor's stories and I was beginning to understand why someone might choose to shoot a buck instead of a doe. Regardless, my number one goal on this hunt was to come home with some meat and I wasn't going to let my quest for antlers get in the way of that.
"Look up there Ryan!" Trevor stopped and pointed to a flat area on the ridge.
"Are those mules?" I asked out loud, already knowing the answer.
"Looks like it. I wonder how close we can get?"
"Let's find out."
We approached slowly. A herd of 10 or so mules fed leisurely on the crest of the ridge, seemingly unafraid or concerned with our approaching presence. On the other side of the mules stood Rick.
"Mules, eh?" Rick said from the other side of the herd.
"I guess. You never know what you're going to run into in the woods." Trevor said, getting closer.
The mules moved off a little ways as we met up with Rick.
"I'm going to try to ride one of them!" Trevor said, with a wild look in his eyes.
"That doesn't sound like a good idea." I warned, picturing a wild bucking bronco and Trevor flying through the air.
"I'm doing it!" Trevor said triumphantly, setting down his rifle.
Trevor walked up to one of the mules, placed his hand on it's side, and jumped onto it's back. I closed my eyes for a moment out of fear and began to open them slowly. The scene in front of me was not one I expected to see on this hunting trip. 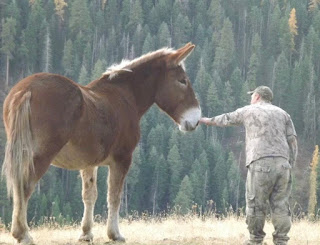 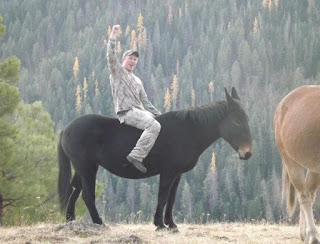 The mule picked up his head and seemed to roll it's eyes as if to say, really? The mule stood there for a moment and then began to feed as if nothing happened. Trevor sat on the mule for a few minutes before dismounting and joining us.
"That was cool!" He said, grabbing his rifle.
"Wow, I can't believe it." I said, still astounded.

We hunted that area a while longer before returning to camp for lunch and to plan our afternoon. Rick decided we should head to an area they had seen numerous bucks in the past and plan a nighttime sit over some meadows. We loaded up into the suburban and lumbered down the road. Maybe it was the early morning hike or the soft suspension of the old SUV, but I could not stay awake as we floated down the dirt road. I take great pride in spotting game while driving, sometimes spending too much time looking at the hillsides and not at the road...just ask my friend, Erik Moncada. But this afternoon, nothing could hold back my afternoon nap.
"Whitetail buck! Whitetail buck!"
I suddenly jerked awake as the suburban came to a halt. I opened my groggy eyes in time to see the flashing white flag of a whitetail deer bound away from the road on our left. Trevor and Rick jumped out of the vehicle and crept off the road into the woods in the direction of the deer. I quickly grabbed my rifle and hurried after them. I expected to hear a gun shot as I looked up to see Rick looking through his scope, where 60 yards ahead stood a nice whitetail buck. I heard Rick muttering something that sounded like safety, while I shuffled to the right and loaded a round into the chamber. The deer still stood there looking everywhere but at us. Why isn't this deer running away? Once again, I heard Rick mutter something in frustration about his safety. I didn't know what was going on, but I knew this deer wouldn't stand there forever. I set my bi-pod out, took a knee, found the deer in my scope and squeezed the trigger. BOOOOM! The buck instantly dropped to the ground. Wow! I just shot a buck! The deer kicked for only a minute or so before passing.
"Ryan! That's a nice buck! Good job!" Trevor said, patting me on the back. "Let's go take a look at him."
We approached the buck and admired him. 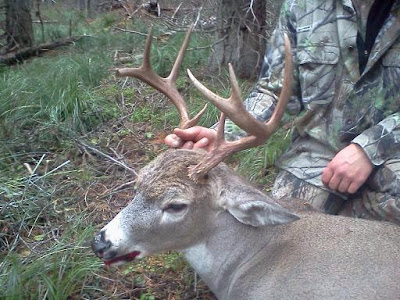 I placed my hands on his antlers and somehow couldn't let go. Each antler was different from the other. I inspected them from the base to the tips and everywhere in between. I simply couldn't stop looking at them. The antlers were just captivating! The buck was not a giant by any means, but it was larger than I had expected. What also surprised me was the size of it's body.
"This is a lot more meat than that doe I shot last year!" I said, patting the animal on it's side. "That's a lot of sausage!" 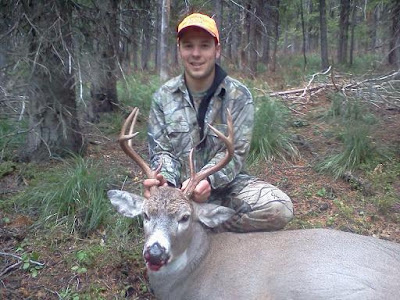 "I think you should do a shoulder mount. I can help you do it." Rick exclaimed.
"I guess. If you think so." I replied, imagining the animal on my wall. I think I could admire this animal forever. "Yeah, let's do it!"
Once the photos had been taken, it was time for the dirty work. The deer was about 100 yards away from the vehicle. An easy drag to the suburban and we could take the deer back to camp and quarter him there.
We made it back to camp and unloaded the deer out of the back of the suburban. Trevor agreed to stay with me and help, while Rick went back out to hunt. Trevor showed me all his tricks in quickly and cleanly quartering a deer. I was indeed thinking about all the good meat this would be, but then I would look at those antlers... Those are pretty neat too. I began to see that each deer had it's own unique antlers. Not one buck is the same as another. Antlers have character and a way of captivating you. Once they start to get in your blood they don't go away. That was the only deer we harvested on that trip, but it made me realize how much more there was to deer hunting. I wasn't out there to simply fill the freezer and head home. I also wasn't out there to trophy hunt. I was there to enjoy the hunt with family and friends and maybe, just maybe, spend a little extra time trying to find one of those unique and mature bucks. I love eating deer, but that hunt made me realize there was more to deer and deer hunting than just sausage.

Posted by Ryan's Fly Fishing and Hunting Blog at 7:17 PM