I awoke in the middle of the night to the sound of a raven beating it's wings on the top of the tent. Wait, that doesn't make sense. It's night, ravens wouldn't be flying around at night. Where am I? I pondered as I opened my weary eyes. It took me a moment to wake up enough to remember where I was. Katie and I were camping in McCall near the Crestline trailhead. What was that noise? What would be messing with our tent in the middle of the night? Whack, Whack, Whack! There it was again! Katie rolled over and responded by beating on the inside of the tent several times. Apparently she wasn't even slightly afraid of what might be attacking our tent.
"Honey, what was that? It sounded like a bird beating it's wings on the tent." I said, with a confused look on my face.
"I don't know, sounds like something was brushing the frost off of the tent."
Just then, I heard a noise I recognized. Something was messing with the cooler. Crap, I left the cooler out? I quickly grabbed my headlamp and prepared myself for what might be rummaging through our camp. I zipped open the tent and peeked my head under the rain-fly. Two glowing eyes shone back at me 15 yards away. I readjusted the headlamp and discovered the culprit.
"Well hello Mr. Fox!" I said with relief.
At the sound of my words, the fox ran towards me halfway and stopped again. Startled, I grabbed the nearest rock and prepared myself to fight. This is strange fox behavior. The fox took a few steps back, now unsure of how friendly I might be. I hurled the rock at the fox, missing him by just inches. I expected the fox to run off out of fear for his life. Instead, the fox pursued the rock.
"Well don't FETCH it!" I said, almost laughing.
"What's going on?" Katie asked from inside the tent.
"The fox tried to grab the rock I threw at him."
"Strange."
I grabbed a golf ball sized rock, this time determined to 'educate' this fox. I missed him again by inches and again he chased the rock, mouthing it and deciphering it's edibility. Very strange behavior. Someone has been feeding this fox.
I slipped my shoes on and prepared to exit the safety of the tent. No fox is going to get away with this behavior. I'll grab my shotgun if I have to!
I peeked my head out again to find out where the fox was now. He was under my truck peering at me with those glowing eyes. Attempting to add more humor to the situation, I said what any self respecting fox would be terrified to hear. "Trevor would trap you!" At those words, the fox bolted into the darkness.
I chuckled as I exited the tent. Katie's brother, Trevor, must have a reputation amongst animals now as a deadly trapper, I thought as I placed the cooler into the back of my truck. On the top of the cooler were the foxes cute little tracks. 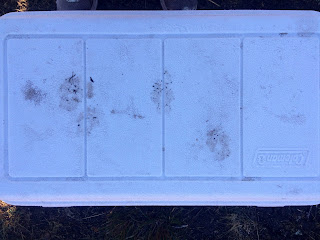 I quickly went back to sleep and when I awoke, it was light outside. I exited the tent and found scrape marks on the rain fly of the tent. There were also fox tracks around camp and he had even tore off the warning label on the propane tank. Quite the mischievous fellow.
After breakfast, we packed up camp and drove down the road to the next adventure. Our legs were fairly tired from the previous days hike, so we opted for an easier activity. Katie's dad had told us about a small stream that kokanee salmon would likely be spawning in. Katie had never caught a kokanee, so we decided that's what we would do for the day.
Our drive through McCall came to a halt when 2 mule deer bucks brought the tourist out of me. I pulled my truck over to get a picture of the two deer feeding right next to the road. 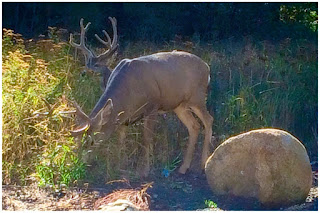 We continued driving to the kokanee salmon spot. Most of the kokanee closer to Boise had already finished spawning, so when we got there, I immediately walked up to the stream to check if the salmon were there. They were indeed there and small red fish were scurrying around everywhere, spawning and chasing each other. 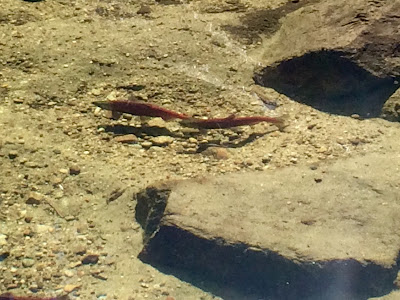 Some of the fish, not yet ready to spawn, were schooled up in the deep pools. Like a maroon amoeba, they moved slowly to and fro. 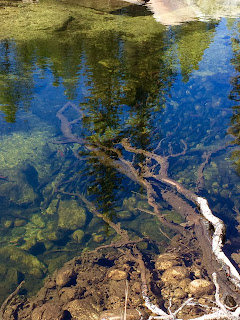 Kokanee salmon are notoriously difficult to catch. Sometimes they are aggressive and will attack anything you throw. Other times you can't get them to bite anything. From my experience, bright egg-like patterns and nymphs are the ticket. I tied on a couple of weighted flies and we walked downstream to a run full of kokanee salmon.
We began casting to individual fish to see their reactions. The males would practically swim away from our flies while the females were showing very aggressive behavior. It wasn't long before Katie was into her first kokanee. Immediately the fish was flying through the air, trying to throw the hook. It seemed the fish spent more time in the air than the water before it beached itself. Kokanee salmon are known for their acrobatics and this small female didn't disappoint. 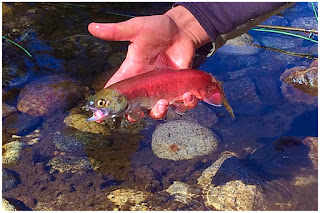 Once we discovered the females were the ones biting, they were all we focused on. The fishing began heating up and we were having a blast catching the little kokanee. 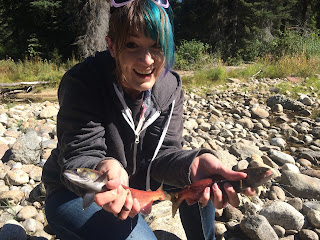 We moved upstream to a deep pool to try for some fish that weren't actively spawning. There must have been over 300 kokanee in this school and they were very skittish. Every time I would cast, the whole school would scatter. I then began to cast and let my fly sink, waiting for the school to return before I began retrieving my fly. It worked like a charm. I was soon hooking fish after fish out of this large school. 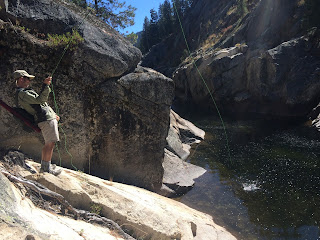 Determined to catch a male, I moved back downstream to some spawning activity and began targeting only the males. It wasn't easy, but eventually I caught one. This guy was small and barely 'humped-up', but a male he was. 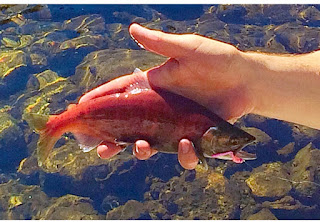 We continued fishing and catching the small kokanee. Katie was into double digits now and having a blast. 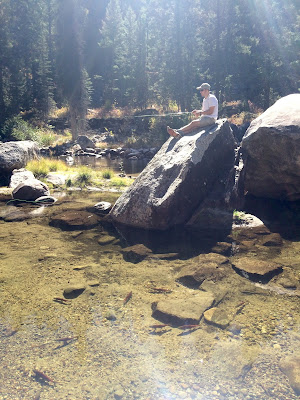 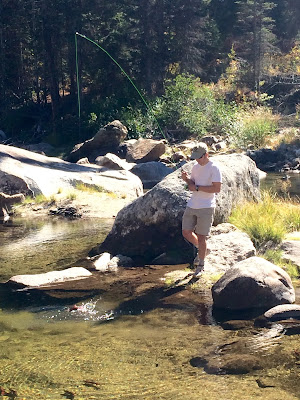 We fished awhile longer before the novelty wore off a little. Kokanee are a fun, acrobatic fish, available only a few weeks out of the year. It's a unique experience everyone should try at least once.
We packed up and joined the train of cars headed back down to Boise. It had been a wonderful McCall trip I hope we can repeat next year.

Posted by Ryan's Fly Fishing and Hunting Blog at 3:34 PM