The South Fork of the Snake

All year, I'd heard nothing but fantastic reports coming from the South Fork of the Snake River. I had never fished it before but it had been on my list for a long time. These reports inspired me to plan a trip with my best fishing buddy, Camron. Camron had lived in Rexburg for several years and became very familiar with the area. I would provide the boat, and with his expertise of the area, we were sure to reek havoc on some Eastern Idaho fish.

Day one of the trip, we would hit the South Fork of the Snake with Camron's friend Shane. Shane is an avid fly fisherman and blogger. I had followed Shane's blog, The Fish Hunter Chronicles, for a year and couldn't wait to fish with him.

We picked up Shane, arranged our shuttle and were rigging the raft by 9 am.
"How long will it take to get the raft ready? We don't have to pump it up by hand do we?" Camron asked.
"It shouldn't take long at all, I have an electric pump!" I responded, with relief and excitement.
I popped the hood of my truck and hooked up the old electric raft pump to my battery. It roared to life and began pushing air into the raft.
"I'll man this and you guys can get your waders on and rods ready." I said, as the raft began to expand.
The pump was working hard and getting very hot, but I began to notice the progress slowing. I decided to let the pump rest a minute before starting again. I fired it back up and progress was once again being made, but the bladder I was working on was only a quarter full. This was taking a little longer than I hoped. As the pump began to heat up again, I remembered how old it was. I had seen this thing in the garage since I was a little kid. This thing must be over 20 years old, I thought as Camron and Shane came back over.
"Taking it's time, eh?" Shane asked, slightly concerned with the raft still being nearly deflated.
"Maybe you guys could grab the hand pump and we'll speed this up a bit." I said, staring at a half inflated bladder that had taken almost ten minutes to achieve. 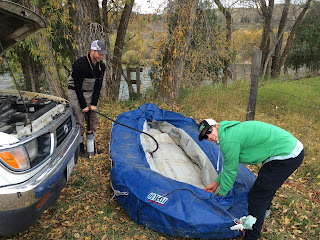 We began taking turns with the hand pump and the electric pump. The raft slowly began to take shape. It was clear that the electric pump was nearly worthless and we inflated 3 bladders by hand in the time it took the electric pump to inflate 1 bladder.
By 10 am, we finally had the boat inflated and ready for the river.
"Sorry guys. That took a lot longer than I expected," I said apologetically.
"No worries. I'm glad I could get my work out in today!" Shane said jokingly. 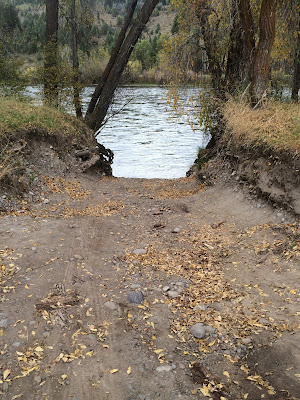 We pushed the boat off and Camron took the oars first. Shane is a stage 4 streamer junky and was not about to test his sobriety today. He was chucking a sink-tip line and double streamers to the bank. I started with one of my bumble butt bee patterns.
We only made it a couple hundred yards down the river before Shane was hooked up. The fish fought hard, but Shane quickly skated the nice brown trout in. 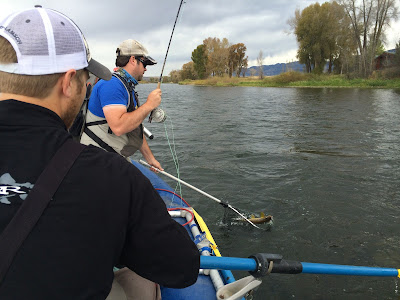 The skunk was now off the boat, but so far my bee had received no love. The boat was approaching a small island where most of the river flowed to the right, creating a soft side channel on the left. As we came closer, we noticed heads coming up on the scum-line. We anchored the boat in the shallows and re-rigged our rods for rising fish. A blue-winged olive landed on the boat, making my decision easy to tie a suspended BWO on. Camron and I worked the rising fish with only a couple refusals, while Shane worked the main river with his streamers. I switched to a size 22 RS2 and was quickly into a small fish. 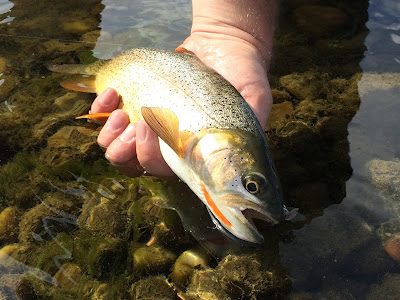 We worked the rising fish awhile longer with only another small rainbow to hand. Our float was a long one and we would need to cover a lot more water. I tied on a large grasshopper and we continued down the river.
We pulled over at the next gravel bar and worked the fast, riffly water. I made a short cast and tried to follow the hopper through the choppy water. I lost track of my fly and saw my line straightening out. I then felt the pull of a fish before I could even set the hook. Line began peeling off the reel as the fish tore across the riffle. I was still in shock when the line went slack.
"Dang! I didn't even see that fish take my fly. I must have been sleeping," I said, casting back to the same spot as if the same fish might grab it again.
Shane picked up another fish on his streamer while Camron set up a nymph rig. I tried another area of the gravel bar before returning to where that fish grabbed my hopper. I made a short cast further downstream and watched as a large cutty slowly rose and ate my fly. After a great battle, I admired the fish and watched him swim off. 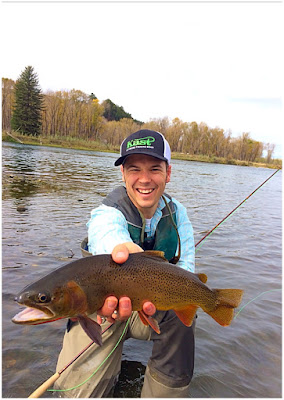 We continued down the river, enjoying the beautiful canyon. 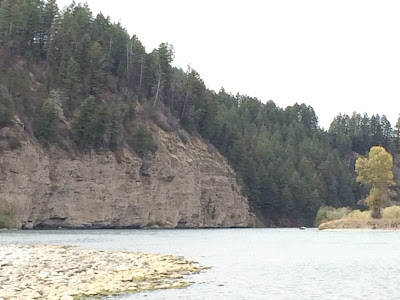 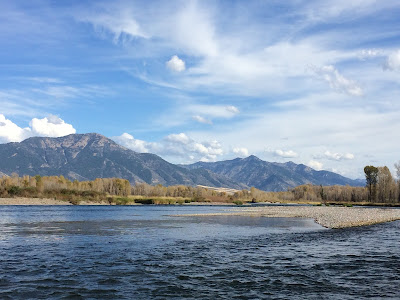 So far the fishing on the South Fork of the Snake had been fair. The weather had called for overcast all day, but the "hatch killing" sun had broken through and we hadn't seen a bug since earlier in the morning.
We floated down a side channel and popped back out onto the main river next to a small gravel island. The soft water next to the island revealed many rising fish and we quickly pulled the boat over. BWO's were hatching sparsely, but every cutthroat was up on them. Camron was into a nice one right away. 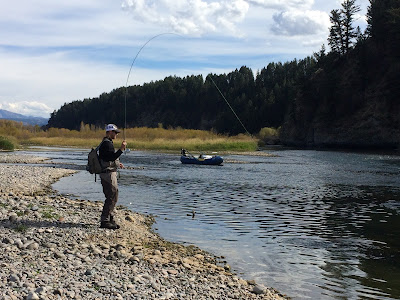 I tied a suspended BWO on and was quickly into a fish as well. 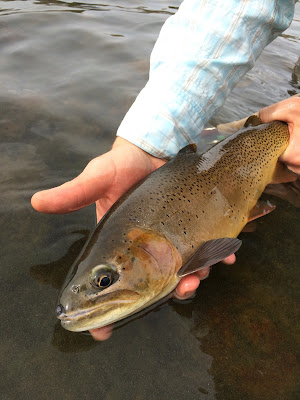 "Dude, I don't think Shane even brought any dry flies. I'm telling you, he's a total streamer junky." Camron said, as Shane worked the outside of the bar with his streamers. "We better give him a suspended BWO."
I offered Shane one of the BWO's.
"Uh, sure, I'll try one of those." Shane said hesitantly as he took the fly, likely questioning if it was worth tying on.
Shane tied on the BWO and was quickly into a decent cutty. 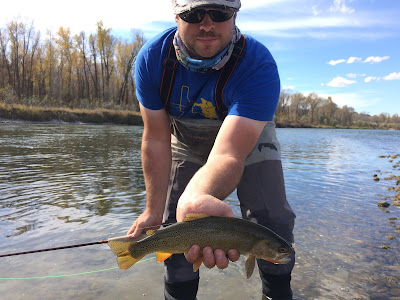 We put the hurt on the rising fish as the BWO's continued to hatch. 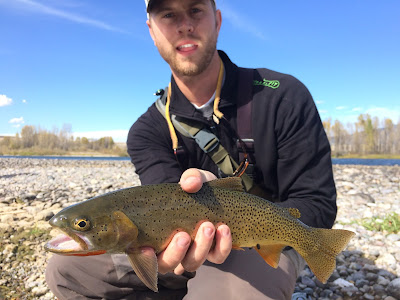 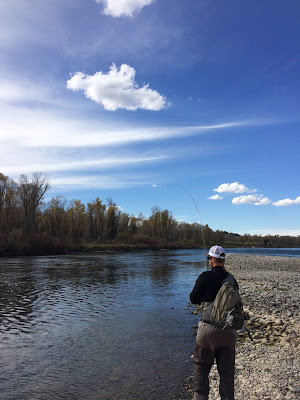 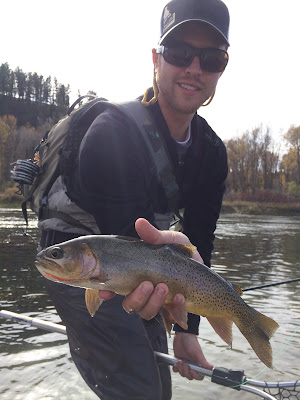 After an hour and a half and 10 or so fish, we hopped in the boat and floated down through where all the fish had been rising. Shane was back on the streamer and getting action on every cast. The water was very clear and lots of nice cutthroat could be seen as we drifted by.
We pounded the banks as we drifted down the river, picking up a fish here and there. 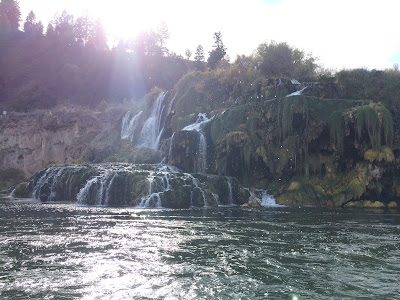 We reached the take out with a few hours of daylight to spare. The South Fork had not disappointed us. The beautiful cutthroats were in a class of their own. Although the BWO's had produced a lot of fish on the one gravel bar, Shane's streamers consistently caught even more. After loading the boat into my pickup, we headed back to Rexburg. Shane had been a pleasure to fish with, and he taught me a couple of tricks while catching all those fish on streamers.
We dropped Shane off with just a few minutes of daylight left. Camron knew a small stream nearby that held a few fish. We decided to spend the remaining light fishing there. Two pools down, I stumbled upon the largest cutthroat I would catch all day. I was stripping my small bugger out of the shadows of an overhanging bush when my line stopped. I set the hook and what came thrashing near the surface shocked me. A gorgeous 19 inch cutthroat tore through the hole, deeply testing the 4 weight rod I was using. After a great battle, we netted him. What a great fish to finish the day on! 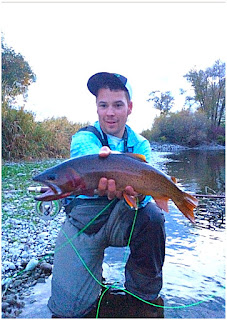 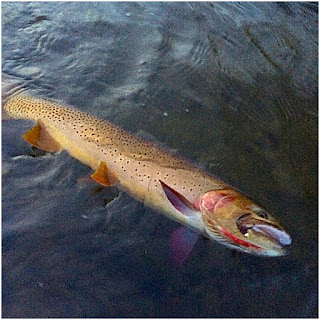 As we walked out in the dark, we talked about where we would fish tomorrow.

"I've got a spot on the Henry's Fork that should be loaded with big browns this time of year. Let's hit that in the morning," Camron said, with a glow in his eyes.
"Sounds good to me!"
Posted by Ryan's Fly Fishing and Hunting Blog at 3:17 PM