Day 3 of our Eastern Idaho trip began just outside of Rexburg. Today we would float the Teton River. I followed Camron to where we would drop off his car for the shuttle. Camron hopped in my truck and we headed upstream to the put in. On the way, we drove past this historical sign. 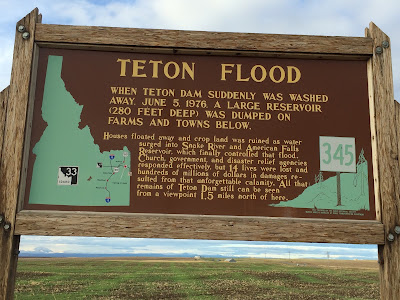 I was very excited to float through the aftermath of such a devastating catastrophe and see the power of water.
The road began to deteriorate fast as we left the pavement and began to near the edge of the old reservoir. We came around the corner and our route took us down the old boat ramp. 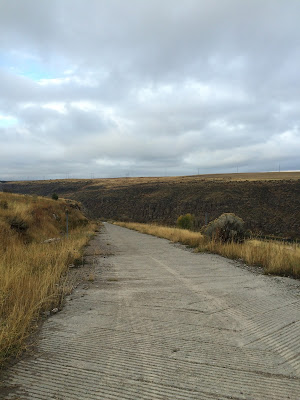 We reached the bottom of the old reservoir and began to set up the raft. By now, Camron and I had developed an efficient system for inflating the boat; as efficient as possible, considering we had to do it all by hand. The electric pump was nearly useless, so we took turns pumping with the dual action hand pump, 50 pumps at a time. The pump began to heat up so much that we had to take a couple breaks, letting it cool so the internal parts didn't melt. 40 minutes later we were ready for our adventure down the Teton River. Camron had never floated this before either so it would be a first for both of us. 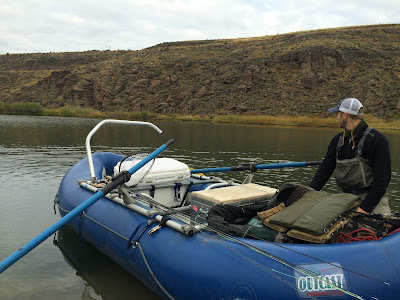 Camron jumped on the oars first and I began fishing with double streamers. I quickly tied into a feisty cutthroat. 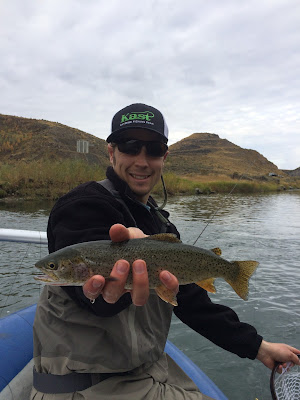 We rounded the corner and discovered our first obstacle; a formidable rapid. I am fairly experienced at navigating whitewater, but the river was very low and 'bony'. We pulled the boat over to scout out the rapid. There were too many exposed large rocks in the tongue, so we choose to walk the boat along the edge on river right. We had to push the boat over a few shallow spots, but we were soon back to fishing. 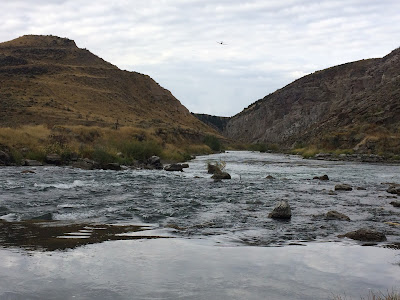 The river continued on through the deep canyon. The water was gorgeous and almost every cast produced at least one follow on the streamers. 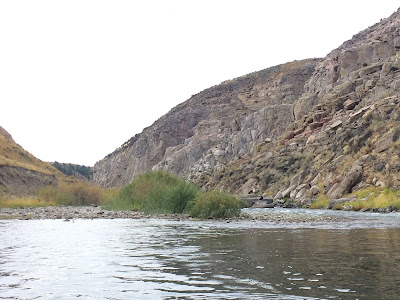 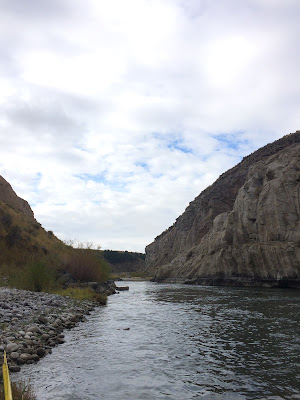 Camron pounded the rocky banks and steep cliffs with his streamers and managed to tie into a hefty Teton cutty. 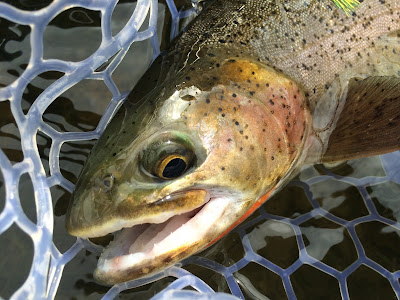 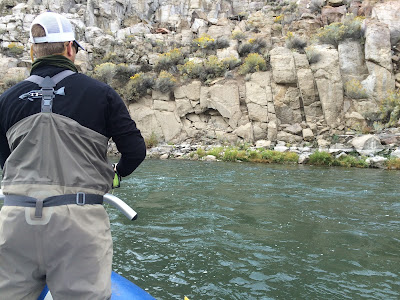 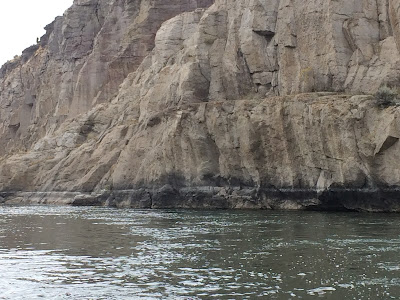 We had already boated a half dozen fish and had only gone half a mile. The Teton river was giving me a smile that was painful to shake as we floated in isolation through gorgeous water. Camron's next fish was another 'cookie cutter' 15 incher. 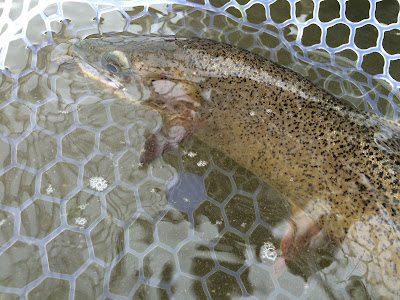 We floated through the location of the old dam and spillway. It was eerie to see the waters destruction and man's feeble attempts to contain it. 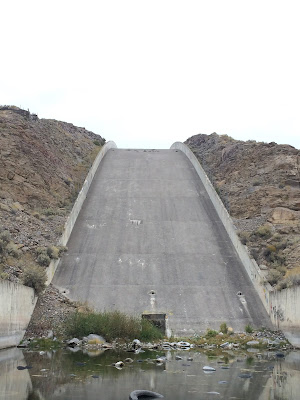 In front of the spillway was a very deep run. Camron bombed a cast upstream, threw a mend in the line and brought his streamers through the deep, dark water. BOOM! Camron set the hook and was into a very large Teton Cutthroat. 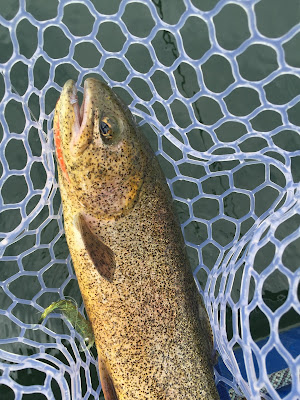 We continued down the river and proceeded to hammer the cutthroat. 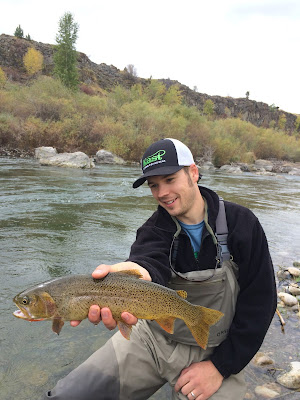 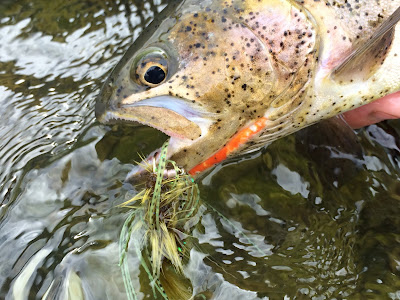 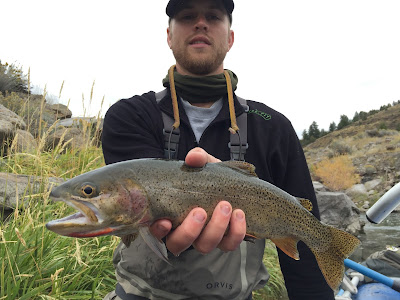 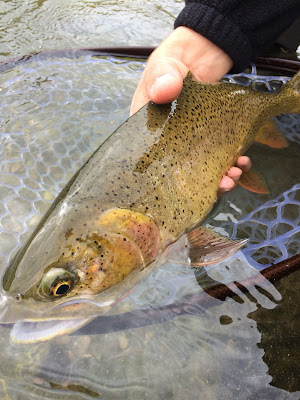 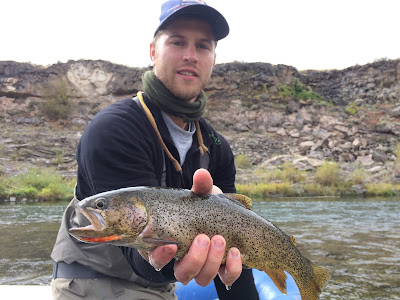 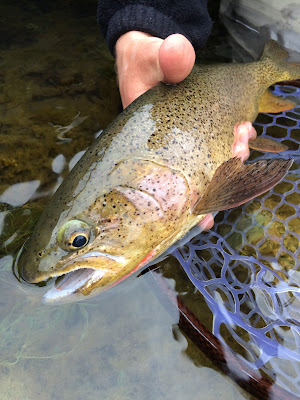 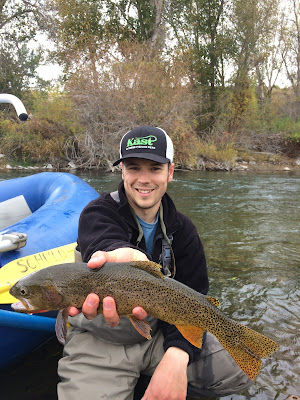 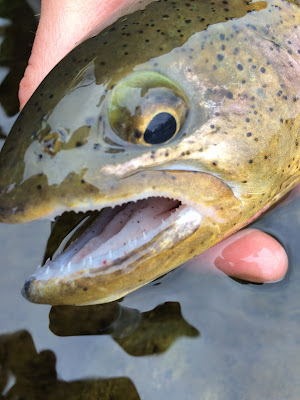 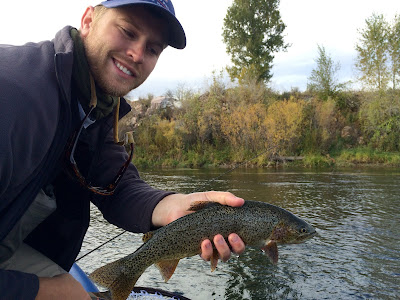 The Teton slowly began to morph from a deep canyon to a wooded meandering stream, similar to the Boise River through the town of Boise. 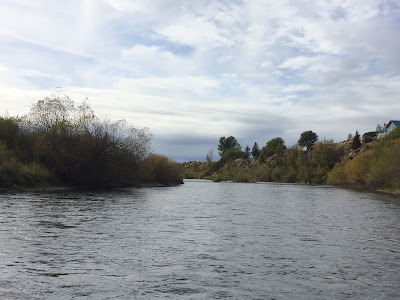 The fishing slowed a little bit as the day neared its end and we approached the takeout. I was on the oars with Camron in the gunners seat when the ambush happened. Camron shot his cast toward a beaver lodge. He made a couple strips and the water exploded!
"OH! Hawg Johnson!" Camron yelled as the large fish thrashed on the surface before making a good run. "Dude, it's a big brown."
"OHHH nice! There's browns in here?" I asked as I tried to control the boat.
"Yeah a few. There's more down here in the lower river."
We slipped a net under the hefty brown. 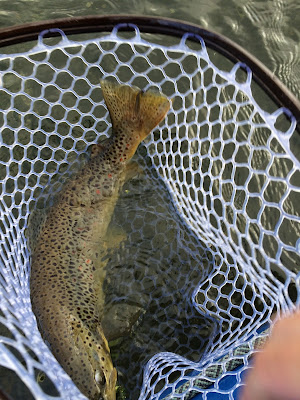 Camron hoisted the fish for a hero shot and set her loose in the cold, productive waters of the Teton River. 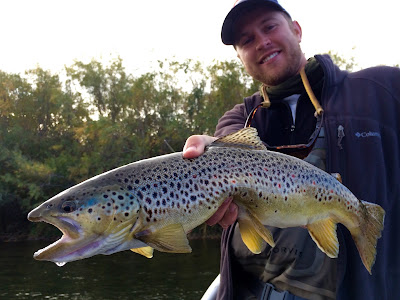 "How close are we to the take out?" I asked.
"It's right there." Camron pointed to the small steep gravel slot amongst the tall grass.
"Oh perfect! And what a fish to finish on!"
We pulled the boat out of the river and hopped in Camron's car for the shuttle. When we returned, the sun was setting, painting a gorgeous picture that summed up the day and really, the whole trip. Eastern Idaho had treated us well and a return trip can not come soon enough! 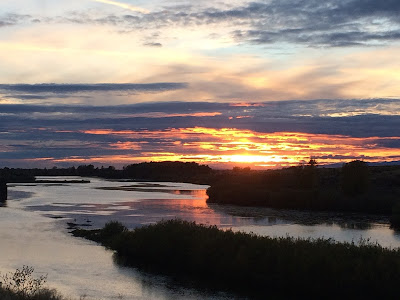 Posted by Ryan's Fly Fishing and Hunting Blog at 3:15 PM