Deer Hunt Day 1: The Luck of the Draw

All summer I dreamt of the large non-typical mule deer that I might encounter this fall. Several months later, my waiting was over.

I certainly won't claim to be an expert at big game hunting. I owe my success in the last 4 years, solely, to my fiancés family. Rick, my future father in law, is a walking encyclopedia when it comes to Idaho's backcountry. He's been all over the state many times and seems to remember every road, rock, animal or tree he has ever encountered. That knowledge gives him a huge edge when it comes to hunting. In fact, his intuition is so remarkable, that I hand my license-number over to him each spring to be placed in a controlled hunt of his choice; mainly because if that's where he wants to hunt, I'll want to hunt there too.

Rick put himself, Trevor (my soon to be brother in-law) and I in for a desert mule deer tag that would take place in November. Against all odds, the three of us got drawn! The best thing about our hunt is it's during the Rut: which means all of those big bucks that have been hiding all year magically appear in pursuit of does.

Rick and I left Boise early in the morning and headed to set up a camp for our hunt, where Trevor was going to meet us the next morning. We turned down the dirt road and found a suitable spot to set up our camp. 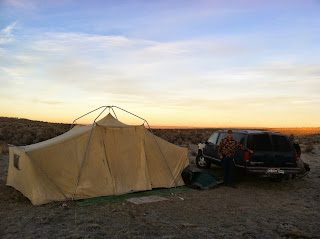 We were eager to get to hunting, so we hopped into the suburban and drove to the end of the road. We made a plan to split up temporarily and meet at the mouth of a large draw. We would then hunt up the draw and the edge of the rocks. Not far after splitting, I found fresh deer-sign. 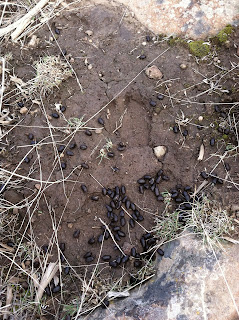 I continued towards the draw, seeing more fresh deer sign along the way. After a while, I began to wonder... where were the deer? It was a very beautiful day, maybe too nice; could all the deer be bedded down in the shade?... If they were, they would be very difficult to spot. I kept my optimism up by scanning my surroundings, because if I found some does, there would likely be a buck with them.

Suddenly, I came across a small spring creek that offered up a nice distraction, as I am also an avid fly fisherman. If I were a deer, this is where I would be, I thought to myself as I approached the creek.  I looked into the crystal clear water and... FISH! A big smile came across my face as countless little fish scurried for their lives as if I were a large heron.  I wasn't able to identify the type of fish I saw, but for now, they were safe from me. 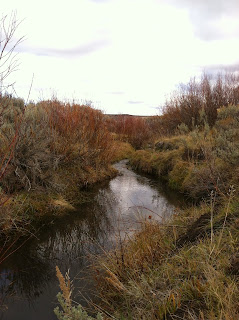 I hopped the creek and met up with Rick, who had seen as little as I had. Together we hiked up the draw, and then made our way back to the suburban.
"How far do you think we just hiked?" I asked Rick.
"Probably 6 miles." He guessed.
"You know, that felt good. I think I needed that." I said, after the weight of the pack was off my shoulders. "Too bad we didn't see any deer." I finished saying, as we got inside the suburban.
"Well we've got a couple more hours of daylight, we'll probably see some tonight." He said back to me, keeping the spirit of the hunt alive; but honestly, we were both tired and looking forward to sitting in the suburban, doing some easy road hunting.

Rick turned the key in the ignition and nothing happened. He turned it again... silence. In a hurried fashion, he fumbled towards the lights and turned them off, as if he could reverse the damage.
He turned to me with a grim face. "Battery's dead. I left the lights on." He said, dismally.
"Seriously?" I asked.
"Yep." He confirmed.
We sat and thought about our scenario; camp was 2-3 miles away and we had a spare battery there for utilities in the tent. We decided we would take one of the pack frames back to camp, strap the battery on it, and hike back to the suburban for a jump. We only had a couple hours of daylight left, so there was no time to waste.

Having a road to walk on made our hike to camp relatively quick.
I slung the battery and pack onto my shoulders, instantly feeling the fatigue in my legs. "Gosh, I'm getting old." I said.
"Oh you're funny." Rick chuckled. 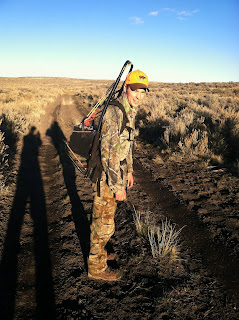 The sun had nearly set by the time we made it back to the suburban, and no deer were spotted on the way. We hooked up the jumper cables and Rick got behind the wheel. I waited in anticipation as Rick turned the key. The engine turned over a little, but not enough. Crap! I thought.

We let the battery sit for a while to hopefully build a charge. Rick tried it again.
VVvroommm!!! The suburban roared to life!
"Thank the Lord," I shouted!
"Well, there went the rest of our day," Rick said, with sadness in his face.

Once we got back to camp, we both collapsed onto our cots. After walking over 10 miles today, we were tired, and I knew I would sleep good tonight! As I laid there, I began to think how terrible it would have been if we were 15 miles from camp when our battery died. It was a scary thought, but I was soon dreaming about the next day's hunt... I would walk 20 miles if it meant finding a trophy buck. The thought made me smile as I drifted off to sleep.
Posted by Ryan's Fly Fishing and Hunting Blog at 8:00 PM