I was awoken by an eerie sound; Coyotes. They were close, very close. By the sound of it, there were at least 5 coyotes howling and yipping away. They have to be less than 200 yards away... I thought as I lay in my cot. Normally you don't have to worry about coyotes, but when there's that many it can be a little scary. I looked at my watch and saw it was 5 am. I dozed back to sleep and before I knew it, it was getting light.

"Rick, did you hear those coyotes last night? They sounded close."
"Yeah they were very close."
Just then, from over the hill behind camp, a coyote howled. Then another, and another, and another! "They are still there!" I said to Rick, with wide eyes. "Shall we try to call some in?"
"I suppose we have time," he replied.

We grabbed the call, a decoy and our rifles, and headed toward the direction we last heard the coyotes. We found a large bush and got into position. I've never shot a coyote, but I love calling any animal in, even if it's to the sound of a dying rabbit...
Rick hit the call. From the hill in front of us, they responded.
"Dang! There are a lot of coyotes around here." Rick said as several coyotes howled. "It won't hurt to get a few. They kill a lot of fawns in the spring."

Out of the corner of my eye, I saw movement. A coyote came into view, running directly towards us. It stopped at 40 yards and knew something was up. BOOM! Rick shot and the coyote fell.
"Dang, that was fast." I said to Rick, congratulating him. 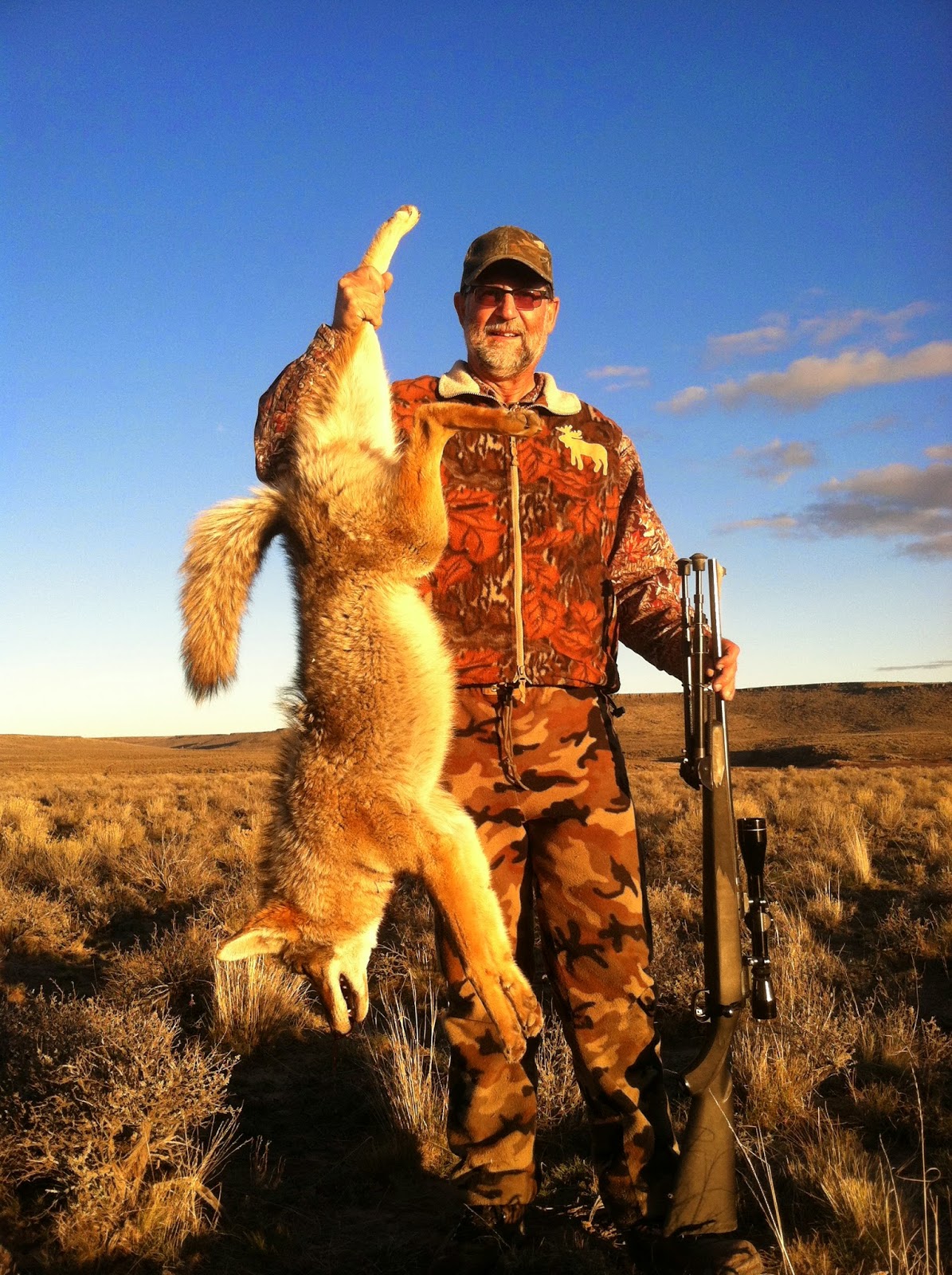 We kept calling, just knowing more were on their way. I looked at my watch and frowned.
"Rick, we better get going. We have to meet Trevor. We better not keep him waiting."
After all, we were here to hunt deer, not coyotes. Rick and I stood up.
"There! To your right!" Rick shouted.
A coyote had just started coming over the hill. I shouldered my gun just in time to see the coyote vanish.
"Oh and there's another one coming in to my left!" Rick shouted in frustration.
His coyote also vanished. We looked at each other and shook our heads.
"Trevor owes us some coyotes." I said to Rick.

We packed our gear for the days deer hunt and headed to the designated meeting place. Sure enough, Trevor was late and with every minute that went by, all I could think about was that coyote that was minutes away from my sights. Oh well, I don't care all that much about shooting a coyote anyway. But I'm sure going to make Trevor think I care!

As Trevor pulled into the turnout, Rick and I shot him dirty looks.
"Trevor, you owe us some coyotes!" I said with disgust in my face. "We were surrounded and they were coming from every direction! But I said to Rick. 'We better go. Can't be late to meet Trevor.' And look who's late..."
"Oh I'm sorry! I tried to text you guys. I guess there's no service here..." Trevor said in defense.
"Whatever. I guess I'll never get my coyote."

Trevor hopped in with us and we drove up the road to a completely different area. This one screamed big mule deer. Old growth sage brush, aspen groves, and steep rocky hillsides. Does it get any better than that?

My legs were not ready for another 10 miles, so I decided I'd take it a little easier today. We parked the suburban, set our individual courses and took off. Trev and I didn't go far before we saw something every big game hunter gets excited about seeing; A RUB! A rub is where a buck or a bull elk rubs his antlers on a small tree, often tearing the bark off. He does this to rub the velvet off of his antlers and to mark his territory. 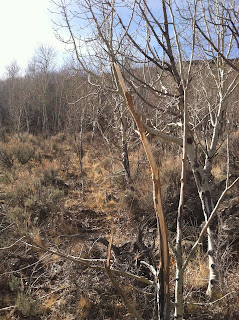 The height of this one told us it was an elk rub. We were excited to see this, but we were after deer, not elk. We went on further and found lots of elk sign, including more rubs, but little deer sign. Trev and I split up and I hiked up a draw to watch an area for a couple hours. 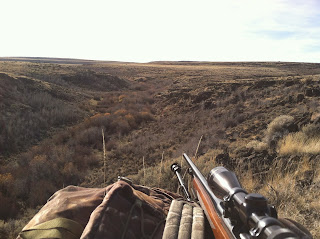 The day wore on and still no deer. I didn't hear any shots, so I knew Trev and Rick hadn't seen any big bucks either. This was just such awesome country that there had to be some deer. Evening approached and I watched another hillside in another draw. Another whole day without deer? I thought. Since I hadn't seen any deer sign in hours, I got up and made my way back to the rig. Rick was already waiting.
"See anything?" I asked.
"Nope, found some chukars though."
"I didn't see anything either. Just a whole bunch of fresh elk sign, but I didn't see an elk," I chuckled.
Trev didn't show up until about 20 minutes after it got dark.
"There he is," I said.
A headlamp appeared out of the brush.
"He's got something in his hands," I said with a suspicious tone. "It's an elk antler."
Trev approached the rig and in his hand was a large 5 point elk antler.
"In case you were wondering Trev, NO, it's not fair that you found an elk antler. I've never found an elk antler!" I said with jealousy.
"Oh Ryan, I'm sorry. I've found tons..."

We drove back to camp in the darkness. Another day with no deer. I was beginning to wonder if this was a good area to hunt.
"Tomorrow! I just know we are going to see a deer! I can feel it!" I said triumphantly.
Posted by Ryan's Fly Fishing and Hunting Blog at 7:24 PM