It had been over a week since I had been on my last duck hunt, as explained in my previous blog. Needless to say I was very eager for redemption. It was almost November and I had yet to experience a productive duck hunt. I picked my day and decided I was going to hunt no matter what! I was unable to find someone who could accompany me, so I readied myself for a solo hunt.

I woke up at 4am, wide awake and excited. My alarm was set to go off at 4:30, but I wasn't going to risk losing my spot. I got a very early start. In fact, by 5:45 I had the decoys on my back and I was already marching through the darkness out to "the pond".

As I neared the pond, I could hear the chatter of hundreds of ducks who were "roosting" on the pond. I slowly approached the water and turned off my headlamp to stand, listening for awhile. I couldn't see all the ducks, but a smile came across my face. I had a good feeling about the morning ahead of me.

I set down the bag of decoys with the rest of my gear and got ready to set up my spread. I stepped into the water and the pond erupted! The wing beats of hundreds of ducks flushed, quacking as they disappeared into the dark sky. I set up my small decoy spread of 14 decoys. I then made my blind in the bull rushes and sat down to wait for legal shooting light. Some of the ducks I had flushed began to come back to the pond and land in my decoys. 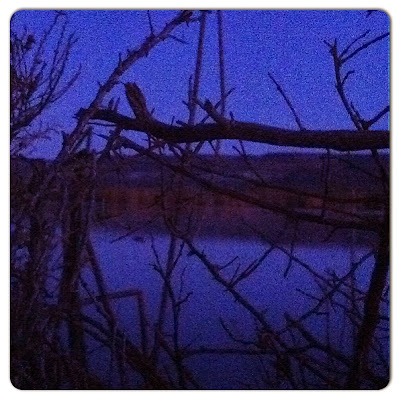 Legal shooting light came around and I anxiously awaited my first group of ducks. A pair of small, dark ducks came zipping in at Mach speed and landed in the decoys. I got excited for a split second until I realized what they were; buffleheads. You guys are safe from me, I said in my head. The pair hung out for a little while before flying away to another spot on the pond.  A few minutes passed and my first group of puddle ducks appeared. They were already locked and gliding into my decoys. As they came near, I could see that they weren't mallards, but gadwalls. They spilt up and landed throughout the decoys. Not wanting to test the curse of the gadwall theory (see previous blog), I refrained from attempting to shoot any of these. There will be more opportunities, I thought.

As a fly fisherman, I've been programmed to hate wind. But it wasn't until I started duck hunting that I found a practical purpose for wind. A duck hunters worst nightmare is a windless day. Wind helps move the decoys, giving them life. This helps convince wary, keen eyed ducks to land. As the morning progressed, my worse fear started to manifest; little wind. Luckily, I have a trick up my sleeve for such occasions. The jerk chord! I rigged a couple of my decoys up to a jerk cord and sat back in the blind. I gave it a pull and life was restored to my plastic friends! 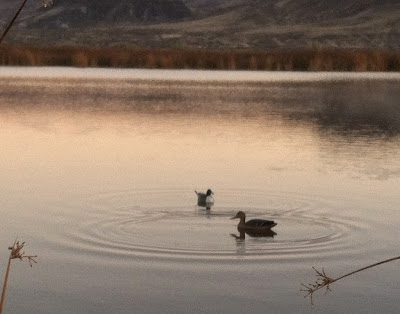 As I was pulling on the decoys, some movement caught my eye in the sky. I made out a single, large duck headed straight my way. Here we go, I said to myself. I pulled on the decoys again and the duck responded by locking it's wings, dropping into the decoys. I identified the duck as a hen mallard. Normally I don't shoot hen mallards, but adrenaline overtook me and the way she was dropping in was hard for me to resist. I stood up and shot. BOOM! The duck fell, and I had my first duck of the season! I waded out to the duck and grabbed it. "Sorry girl," I said apologetically.

I sat back down in the blind and admired the gorgeous hen. Little time passed before the next group of ducks appeared. Ten or so mallards made their way over to my spread, analyzing it. I pulled on the jerk cord and gave them a 5 note hen greeting. They locked their wings and I could tell they were convinced. They quickly descended and began backpedalling into the decoys. I stood up and picked out the greenheads. BOOM! My first target fell. I moved onto my next greenhead. By now they were quickly leaving the scene. BOOM! My next shot missed. But I followed through for a third shot. BOOM! I hit the greenhead but he didn't immediately fall. The wounded duck continued to glide away down the pond to my right. He didn't make it far before falling suddenly from the sky. Must have got him in the lungs, I thought. I ran down the bank of the pond to find him laying in the water. I retrieved him and returned to the blind for the first greenhead I shot. 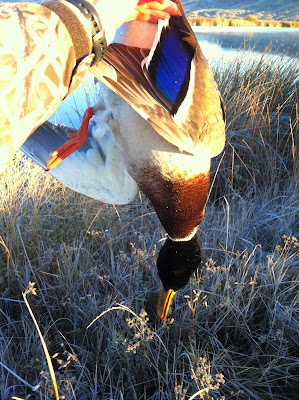 Both birds were large and healthy. I hoisted the larger one up into the sunlight. The beautiful forest green on the head and the iridescence of the blue-green wing speculum reminded me how awesome these animals are.
I was quite out of breath from my run down the bank of the pond and wading in the mud. I grabbed my water bottle and took a needed swig. Apparently catching my breath was not on the schedule this morning because straight ahead of the blind were several mallards locked and dropping in. I slowly, but surely, closed my water bottle just in time to see 3 greenheads backpedalling into my decoys. I stood up and mounted my gun. Two of the drakes started making their ascent and it looked like their paths might cross. I hesitated a moment. Could I possibly get a double? I thought to myself. The drakes lined up and I shot. BOOM! One of them fell, but the other did not. BOOM! My second shot brought the other duck down. I left the blind to retrieve my greenheads. I trudged through the mud and grabbed the drake that was farther out. Something caught my eye as I approached the second bird. I had to do a double take because I couldn't believe what I saw. The duck had a metallic ring on its left leg. A BAND! I was so excited I let out a loud, "WOOOOOO!" I'd been duck hunting for almost 10 years and I'd never shot a banded bird. 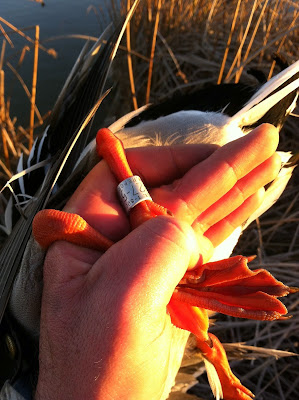 In case you were wondering, biologists catch and place metallic rings on ducks' feet as a way of tracking the birds' migration. Due to the difficulty of catching wild waterfowl, very few ducks get banded every year. Therefore, shooting a duck that has been banded is relatively difficult. Some hunters go their whole lives without shooting a banded duck, while others have shot dozens. It really comes down to luck. And today, I was feeling lucky! For more information go to flyways.us. 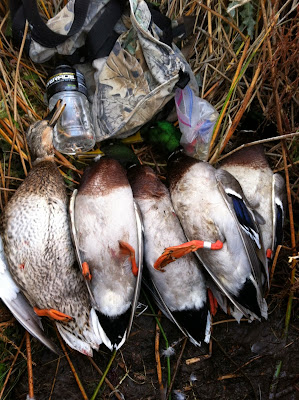 The action slowed for the rest of the morning. Several more groups of ducks showed interest in my spread. However, between ducks landing outside the decoys or bad shooting, I was unable to take any more ducks home. I was more than happy with 5 ducks. Besides, it was a long way back to the vehicle and I already had plenty of gear to carry. 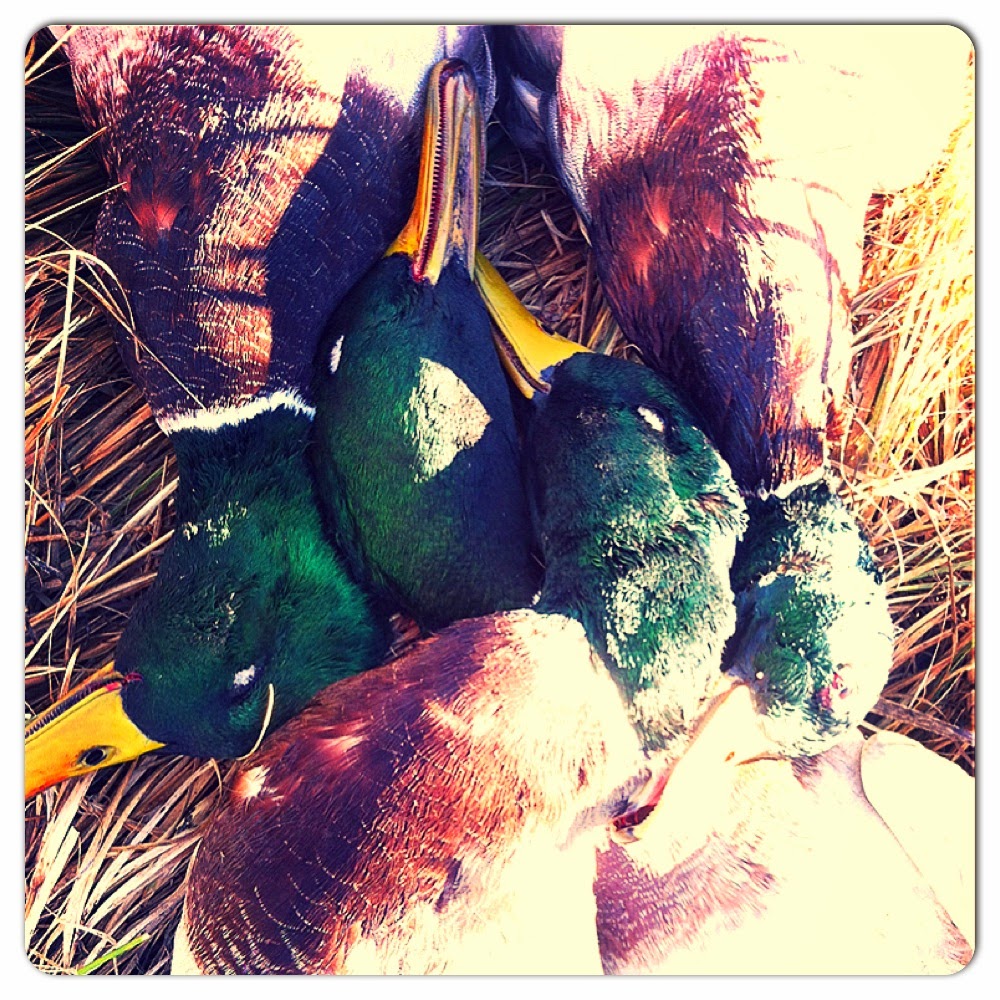 I picked up the decoys and loaded all my gear onto my back. I made my way back to the parking lot. There were a couple pheasant hunters there, and I looked up to see them staring at me with quirky smiles on their faces. I was probably quite the sight to see in camouflage, neoprene, boot-footed waders waddling down the road. I had a vest full of gear, a spinning wing-decoy in one hand, a shotgun in the other, a large bag of decoys on my back and 5 ducks swinging to-and-fro with each step. I walked into the parking lot and said, "This duck hunting is sure a lot of work".
"Well, it looks like it paid off for you," one of the pheasant hunters replied.
"Ha ha, yeah I guess it did," I chuckled back to him. 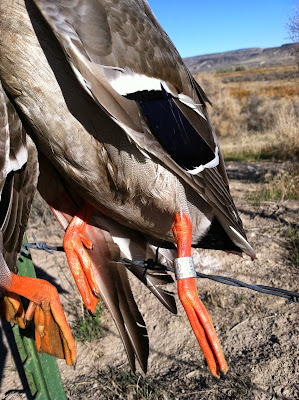 I loaded everything in the vehicle and drove home with a healthy smile on my face. When I returned home, I called the phone number on the duck band. They told me that the duck I shot had been banded in central California in 2011.
I realized I may not be able to go duck hunting again for a while, but only because my next trip would be deer hunting. This year was going to be special because I drew a desert mule deer tag for November. I could hardly wait!